Home » German Shepherd Renamed ‘Miracle’ After Being Thrown Off Balcony

German Shepherd Renamed ‘Miracle’ After Being Thrown Off Balcony 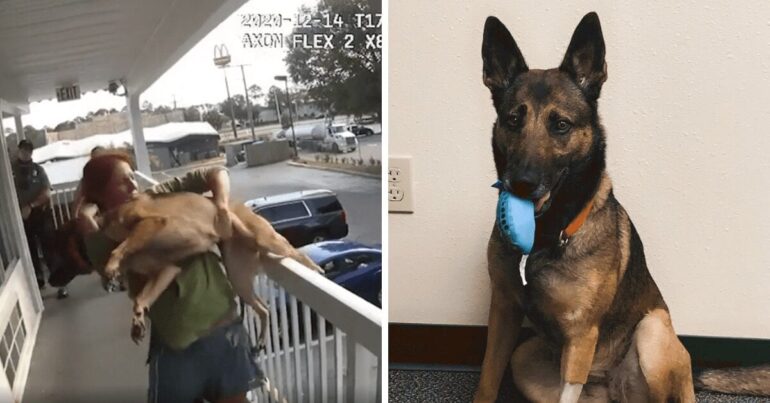 Call it luck or cat-like reflexes, but Florida residents and police officers are calling a dog “Miracle” after she walked away from a scary situation. The dog’s owner tossed the German Shepherd over a second-story balcony at a Daytona Beach motel. The body cam video of the incident is alarming, but the newly dubbed Miracle is feeling fine. In fact, she could end up finding a better life.

According to the Volusia Sheriff’s office, police arrived at the motel after receiving calls about a “suicidal person.” A woman was threatening to jump from a second-story balcony, and she also allegedly attacked a hotel maid. Sheriff’s deputies knocked on the woman’s door multiple times before she eventually came out with her dog on a leash.
In a move that shocked everyone involved, the woman quickly picked up the dog and threw it over the railing. Thankfully, the dog landed on its feet and ran a few yards before it was stopped by bystanders.
After a thorough vet check, it was confirmed that the newly named Miracle survived the scary ordeal without sustaining a single serious injury. She did, however, have a sewing needle imbedded into her leg. After this was removed, she was transported to a foster home where she’s currently enjoying love from a new family.

Seconds after Miracle went over the railing, officers apprehended the woman who so heartlessly tossed her aside. She has been charged with animal cruelty, and the sheriff’s office says there is a petition for custody to permanently remove the dog from the woman’s care. That hearing will take place in the next few weeks.
In the meantime, Miracle has already stolen the hearts of her foster family. She has proven herself to be both tough and affectionate, and the family has expressed interest in making their relationship official. As long as the court comes through and grants the dog freedom from her previous owner, the fosters hope to adopt Miracle as part of their family.

This website uses cookies to improve your experience while you navigate through the website. Out of these, the cookies that are categorized as necessary are stored on your browser as they are essential for the working of basic functionalities of the website. We also use third-party cookies that help us analyze and understand how you use this website. These cookies will be stored in your browser only with your consent. You also have the option to opt-out of these cookies. But opting out of some of these cookies may affect your browsing experience.
Necessary Always Enabled
Necessary cookies are absolutely essential for the website to function properly. These cookies ensure basic functionalities and security features of the website, anonymously.
Functional
Functional cookies help to perform certain functionalities like sharing the content of the website on social media platforms, collect feedbacks, and other third-party features.
Performance
Performance cookies are used to understand and analyze the key performance indexes of the website which helps in delivering a better user experience for the visitors.
Analytics
Analytical cookies are used to understand how visitors interact with the website. These cookies help provide information on metrics the number of visitors, bounce rate, traffic source, etc.
Advertisement
Advertisement cookies are used to provide visitors with relevant ads and marketing campaigns. These cookies track visitors across websites and collect information to provide customized ads.
Others
Other uncategorized cookies are those that are being analyzed and have not been classified into a category as yet.
SAVE & ACCEPT
Home » German Shepherd Renamed ‘Miracle’ After Being Thrown Off Balcony