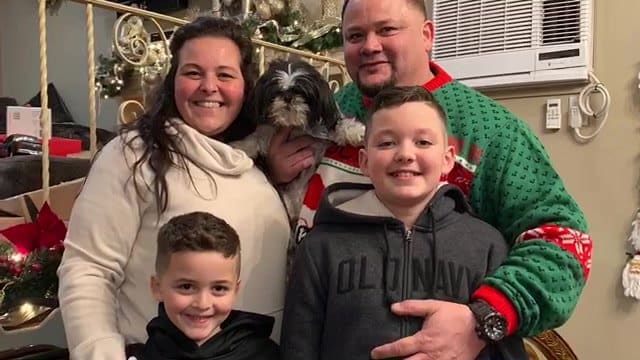 A Long Island family was devastated when their beloved dog, an 11-year-old Shih Tzu named Bella, disappeared a week before Christmas. Fortuna Feliciano and her family were working with authorities to bring their stolen dog home, but the odds of a happy ending got worse with every day. It didn’t help that the holidays are the busiest time of the year. But thanks to tremendous effort from her neighbors and the Suffolk County SPCA, the Feliciano family experienced the best kind of Christmas miracle.

Everything started when Feliciano noticed Bella had escaped the yard.

The little dog managed to dig a hole under the fence when her family wasn’t looking. When her sons got home from school, Feliciano packed them into the car and started searching the neighborhood. They drove slowly down every street calling Bella’s name, but they didn’t see her.

During that search, Feliciano missed a call from an Amazon delivery person. The Amazon worker had been delivering Christmas packages nearby when they saw Bella wandering on her own. They called the phone number on Bella’s collar. But by the time Feliciano called back, the Amazon worker no longer had the dog. They said they had given the pup to a jogger who said they knew who the dog belonged to. Thinking the person was a neighbor doing a good deed, the worker handed over the dog so they could continue their deliveries.
Feliciano was hopeful a neighbor would soon come knocking on their door holding Bella, but that knock never came. As more time passed, it became clear that the “helpful neighbor” wasn’t trying to be helpful at all.

Investigators determined Bella had indeed been stolen. They started looking for any clues that could tell them where the stolen dog was. The entire week before Christmas, Feliciano focused on Bella.  She told NY Post,

“I felt that I had lost my child. I never stopped looking for her.”

Investigators talked to the Amazon delivery person and neighbors hoping for clues. On the Monday before Christmas, the Suffolk County SPCA announced a $2,000 reward for credible information.

Investigators promised that they would have Bella home in time for Christmas. But deep in her heart, Feliciano knew it would be a tough promise to keep. They were at a dead end and no closer to Bella. All the odds were pointing to a Christmas without their furriest family member.
On Christmas day, Feliciano had a muted holiday celebration with her kids. Everyone knew someone was missing.

Meet Freddy, The Tallest Dog In The World

When investigators received a Christmas day tip, everything changed.

Determined to keep their promise, officials didn’t waste any time in following through with the tip. It didn’t matter that it was a holiday, all that mattered was getting Bella back.
At 10 pm on Christmas night, Feliciano got the news. The tip was legitimate, and Bella was on her way home. It was a long drive, but with only two minutes to spare, the stolen dog made it home for Christmas. Feliciano said,

“When they drove up to the driveway with Bella…my heart just healed. It’as an emotion that’s very hard to explain.”

Now that Bella is safe at home, there is an ongoing investigation into the theft. Feliciano wants to know who is responsible for almost tearing her family apart, but for now, she’s rejoicing over her very own Christmas miracle.

Watch a short video on the stolen dog below.

This website uses cookies to improve your experience while you navigate through the website. Out of these, the cookies that are categorized as necessary are stored on your browser as they are essential for the working of basic functionalities of the website. We also use third-party cookies that help us analyze and understand how you use this website. These cookies will be stored in your browser only with your consent. You also have the option to opt-out of these cookies. But opting out of some of these cookies may affect your browsing experience.
Necessary Always Enabled
Necessary cookies are absolutely essential for the website to function properly. These cookies ensure basic functionalities and security features of the website, anonymously.
Functional
Functional cookies help to perform certain functionalities like sharing the content of the website on social media platforms, collect feedbacks, and other third-party features.
Performance
Performance cookies are used to understand and analyze the key performance indexes of the website which helps in delivering a better user experience for the visitors.
Analytics
Analytical cookies are used to understand how visitors interact with the website. These cookies help provide information on metrics the number of visitors, bounce rate, traffic source, etc.
Advertisement
Advertisement cookies are used to provide visitors with relevant ads and marketing campaigns. These cookies track visitors across websites and collect information to provide customized ads.
Others
Other uncategorized cookies are those that are being analyzed and have not been classified into a category as yet.
SAVE & ACCEPT
Home » Family Reunited With Stolen Dog Two Minutes Until Midnight On Christmas Day