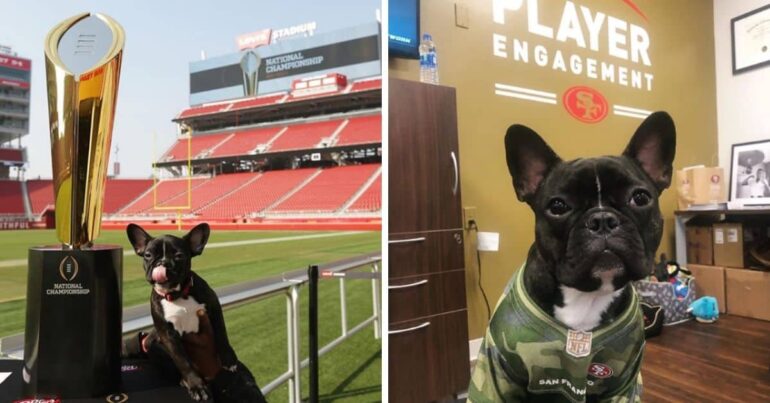 The San Francisco 49ers have found their secret weapon in their 2020 charge through the playoffs. NFL commentators will have you believe the team’s position as the number 1 seed in the NFC is thanks to star players like Kyle Juszcyk and quarterback Jimmy Garoppolo. But there’s another key position that deserves some respect. She may be sitting on the sidelines, but the NFL’s first emotional support dog has a big job to do.

Zoë was adopted as a registered emotional support dog by 49ers director of player engagement, Austin Moss, last year. The French Bulldog has been tasked with helping players and coaching staff deal with the pressures of being in the NFL. She provides some of their best medicine to fight off stress, anxiety, and depression.

You can’t look at that face and not smile!

With Zoë on their team, the 49ers are the first NFL franchise to employ an emotional support dog. A team spokesperson told CNN,

“The players rely on Zoë to brighten their day. Meetings, practice, and workouts can make for a long day. Zoe acts as a stress reliever.”

One of Zoë ‘s biggest supporters is defensive tackle Solomon Thomas. The NFL player has been open about his struggles with depression after his sister died of suicide in 2018. He has always  been an advocate for the special healing power of dogs and played a role in getting Zoë her spot on the team. Thomas helped name her and is confident that her presence is helping not only him, but his entire team.

“This is a very stressful job, it’s very hard for a lot of guys. A dog could be a perfect getaway from some guys, and sometimes you don’t know what a dog could mean.”

She’s even friends with the mascot!

Zoë spends most of her days hanging out in her office (Moss’s office) greeting everyone who comes to visit. She’s met quite a few famous footballers and is reportedly very good at her job.  Thomas told The Athletic,

“I can have a good practice or come in there really mad, or come in really sad, and Zoë races over to me. I can just play with the little puppy for 10 or 15 minutes, that just kind of resets my day and lets me put everything back into perspective and keep going.”

Whether they win or lose, the 49ers know they have Zoë to rely on for support. She doesn’t care if they fumble the ball or miss a field goal. She’s there for them when the pressures of balancing life with professional football seem like too much to handle. And when they win big, she’s always the first one to offer a congratulatory lick and tail wag.
Right now Zoë is an emotional support dog, but Moss has plans to start training her to be a registered therapy dog as well. We hope more NFL teams follow their lead!
Check out her Instagram!

This website uses cookies to improve your experience while you navigate through the website. Out of these, the cookies that are categorized as necessary are stored on your browser as they are essential for the working of basic functionalities of the website. We also use third-party cookies that help us analyze and understand how you use this website. These cookies will be stored in your browser only with your consent. You also have the option to opt-out of these cookies. But opting out of some of these cookies may affect your browsing experience.
Necessary Always Enabled
Necessary cookies are absolutely essential for the website to function properly. These cookies ensure basic functionalities and security features of the website, anonymously.
Functional
Functional cookies help to perform certain functionalities like sharing the content of the website on social media platforms, collect feedbacks, and other third-party features.
Performance
Performance cookies are used to understand and analyze the key performance indexes of the website which helps in delivering a better user experience for the visitors.
Analytics
Analytical cookies are used to understand how visitors interact with the website. These cookies help provide information on metrics the number of visitors, bounce rate, traffic source, etc.
Advertisement
Advertisement cookies are used to provide visitors with relevant ads and marketing campaigns. These cookies track visitors across websites and collect information to provide customized ads.
Others
Other uncategorized cookies are those that are being analyzed and have not been classified into a category as yet.
SAVE & ACCEPT
Home » French Bulldog Named Zoë Is The NFL’s First Emotional Support Dog