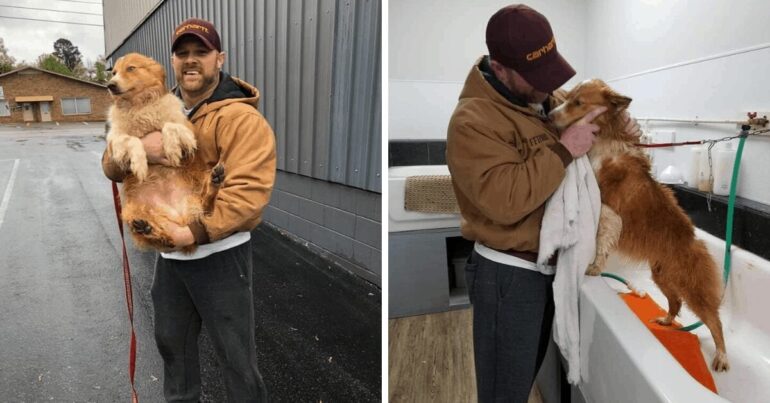 Eric and Faith Johnson of Putnam County, Tennessee finally have something to celebrate. Nearly two months after an EF-4 tornado changed their lives forever, their entire family is back together again. They weren’t sure whether they’d ever reunite with their missing dog, Bella, but the brave Australian Shepherd is officially home safe.
When storms ripped through the Johnson’s neighborhood about an hour outside of Nashville, Eric and Faith barely had time to take shelter in their bathtub. It was their dog, Bella, who helped alert them of the nearby tornado soon before the cyclone tore apart their house.

The storm leveled several homes in the area.

When the winds finally died down, the Johnsons realized their beloved dog was nowhere to be found. They weren’t sure whether Bella was alive or dead, but they weren’t willing to give up. Forced to leave the wreckage that once was their home, the family enlisted help to bring Bella back.
Together with neighbors and family friends, the couple continued to return to their ravaged street with hopes of finding the missing dog. Several sightings buoyed their spirits, but no one could get close enough to end the search.
After the trauma of surviving the storm and being lost in her now-ruined neighborhood, Bella was terrified and alone. The Johnsons tried several methods to lure her to them, but nothing worked. They left out clothing hoping to attract their dog with their scent and relied on neighbors to track her movements.

Sarah Romeyn, who often helps track missing animals, was working tirelessly to help the Johnson family find their missing dog. The search led to several dead ends, but then Romeyn received a promising tip.
An employee from a nearby animal grooming business thought they spotted Bella near an alley across the street. Hopeful with this new information, Romeyn worked with A.A.R.F (All About Rescue and Fixin’ Inc.) to set up food and trail cameras outside the alley.

The mystery dog was indeed Bella, and while she looked obviously nervous and afraid, she didn’t seem to be hurt. The cameras showed that Bella had turned a skinny area between two buildings into her safe place. Romeyn posted a few of the videos to Facebook, and they show a nervous Bella making sure no one discovers her hiding place.

With Bella in her sights, Romeyn was then able to call Eric and another friend to help bring in the missing dog. They worked together to block the alley so Bella couldn’t run away, and Eric swooped in to show his dog that she was finally safe and secure.
With their missing dog back in their arms, the Johnson family plans to rebuild their home. Their journey isn’t over, but they refuse to let this tragedy dictate their lives. Bella is back, their family is complete, and their story shows that hope is never out of reach.
ht: NewsChannel5
Ready for more good news? After 848 days in a shelter, an Indiana dog is finally going home. Click here to read this heartfelt story.

This website uses cookies to improve your experience while you navigate through the website. Out of these, the cookies that are categorized as necessary are stored on your browser as they are essential for the working of basic functionalities of the website. We also use third-party cookies that help us analyze and understand how you use this website. These cookies will be stored in your browser only with your consent. You also have the option to opt-out of these cookies. But opting out of some of these cookies may affect your browsing experience.
Necessary Always Enabled
Necessary cookies are absolutely essential for the website to function properly. These cookies ensure basic functionalities and security features of the website, anonymously.
Functional
Functional cookies help to perform certain functionalities like sharing the content of the website on social media platforms, collect feedbacks, and other third-party features.
Performance
Performance cookies are used to understand and analyze the key performance indexes of the website which helps in delivering a better user experience for the visitors.
Analytics
Analytical cookies are used to understand how visitors interact with the website. These cookies help provide information on metrics the number of visitors, bounce rate, traffic source, etc.
Advertisement
Advertisement cookies are used to provide visitors with relevant ads and marketing campaigns. These cookies track visitors across websites and collect information to provide customized ads.
Others
Other uncategorized cookies are those that are being analyzed and have not been classified into a category as yet.
SAVE & ACCEPT
Home » Missing Dog Reunites With Family 54 Days After Tornado Destroyed Their Home