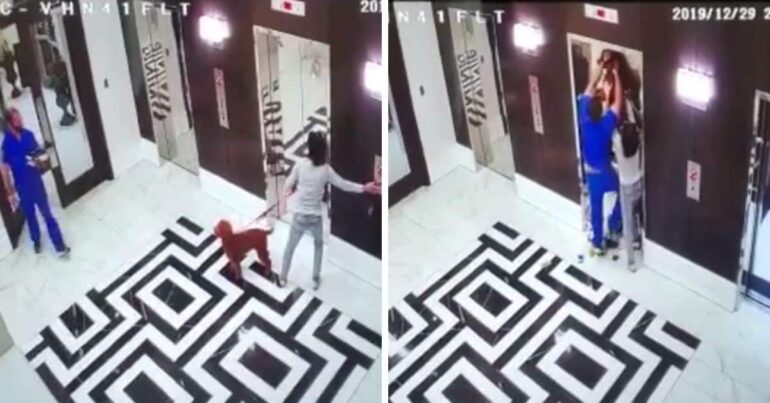 For the second time in the past few weeks, security footage shows a local hero saving a dog from an elevator. Originally shared on social media and then by WTSP News in Tampa Bay, the dramatic footage shows how an off-duty doctor sprang into action to save a dog whose leash got caught in an elevator’s door. The dog was seconds away from being strangled, but this story has a happy ending—and an important warning.
Mohammed Awad walked into the lobby of his apartment building carrying a takeout container. The dog turned and wagged its tail, but within a second, the medium-sized dog was lifted off its feet. The dog’s leash had gotten caught in the elevator doors. It was yanked off the ground by its collar and instantly started choking.

Watch the video below!

The dog’s frantic owner tried to pull the dog free, but every second was life or death. Awad dropped his food and ran to the elevator to try and help. It took several seconds and multiple attempts, but with one final effort, the dog falls to the floor. Security footage shows the terrified dog running through the lobby—it was traumatized, but alive.
Since Awad’s brother first posted the video on social media, people have come forward to call Awad a hero. The doctor told a local news agency,

“I’m busy trying to break the leash away from the dog’s neck. You can see in the video, my first try, I couldn’t get it. I basically looked up, all in one second, I said, ‘I can’t get it. It’s too hard. I’m going to try it one more time, give it everything I had. I jumped up again and I basically, last minute, got it. The dog basically had one or two seconds left.”

Awad’s quick actions saved a life, and the incident should also be a warning for all dog owners. This is the second time in recent weeks that a dog has nearly died due to their leash being caught in an elevator.
If you and your pup use an elevator, keep them close!

This website uses cookies to improve your experience while you navigate through the website. Out of these, the cookies that are categorized as necessary are stored on your browser as they are essential for the working of basic functionalities of the website. We also use third-party cookies that help us analyze and understand how you use this website. These cookies will be stored in your browser only with your consent. You also have the option to opt-out of these cookies. But opting out of some of these cookies may affect your browsing experience.
Necessary Always Enabled
Necessary cookies are absolutely essential for the website to function properly. These cookies ensure basic functionalities and security features of the website, anonymously.
Functional
Functional cookies help to perform certain functionalities like sharing the content of the website on social media platforms, collect feedbacks, and other third-party features.
Performance
Performance cookies are used to understand and analyze the key performance indexes of the website which helps in delivering a better user experience for the visitors.
Analytics
Analytical cookies are used to understand how visitors interact with the website. These cookies help provide information on metrics the number of visitors, bounce rate, traffic source, etc.
Advertisement
Advertisement cookies are used to provide visitors with relevant ads and marketing campaigns. These cookies track visitors across websites and collect information to provide customized ads.
Others
Other uncategorized cookies are those that are being analyzed and have not been classified into a category as yet.
SAVE & ACCEPT
Home » Security Footage Shows Doctor Saving A Dog’s Life When It’s Nearly Strangled By Elevator