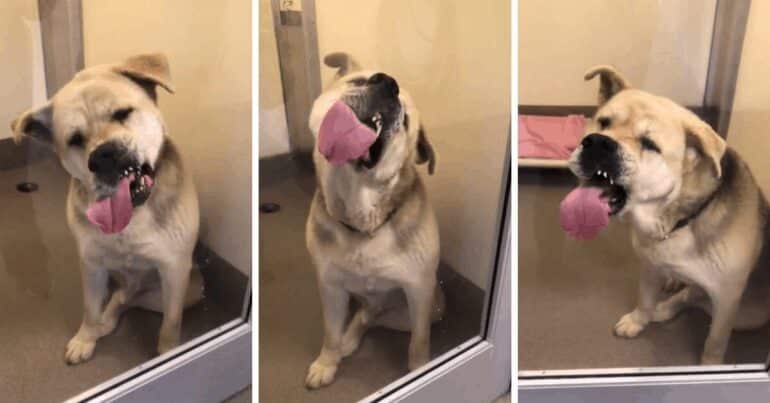 Bo isn’t exactly your average rescue dog. Weighing in at an impressive 150 pounds, this Mastiff and Akita mix has a special skill. He knows his basic commands, like “sit” and “paw,” but his real showstopper is a little more…unique. Bo used his talents as a window washer to make a name for himself at Everett Animal Shelter, and now this hard-working hunk is finally headed home.

Just look at that concentration!

Like all rescues, Bo ended up at the shelter through no fault of his own. He’s a six-year-old gentle giant, but shelter staff knew his size alone would make it harder for the lovable guy to get a home. He needed an adopter that had a secure fenced-in yard and no children under 12 years old. He’s also not a big fan of cats. Those requirements made it harder for Bo to find the right family, but he had a brilliant plan to help attract the perfect adopter.
At the shelter, Bo made a show of demonstrating just how good a boy he is. Any dog can learn tricks, but how many dogs do chores without even being asked? Bo’s window washing might leave behind a few streaks, but it’s the adorable effort that counts!
Glynis Frederiksen, shelter manager, told KOMO,

“Bo is a sweetheart. He’s a volunteer and staff favorite here. We’re committed to helping him find a home that’s a good fit for his needs.”

A frequent adopter and big supporter of the shelter caught Bo’s hard work on video and posted it online. Within a few days, this window washing dog was an Internet sensation. The shelter cleverly said,

“It’s about time to think about spring cleaning and getting those windows washed. Bo would like to apply for the job!”

Bo’s adorable demonstration of his special skills caught a lot of attention, and best of all, it caught the attention of the exact right person. Everett Animal Shelter announced on February 9 that Bo officially found his family.
He found a home that meets all his needs, and he’s off to live a great life with his new dad.
Do you know why dogs chase their tails? Find out here!

This website uses cookies to improve your experience while you navigate through the website. Out of these, the cookies that are categorized as necessary are stored on your browser as they are essential for the working of basic functionalities of the website. We also use third-party cookies that help us analyze and understand how you use this website. These cookies will be stored in your browser only with your consent. You also have the option to opt-out of these cookies. But opting out of some of these cookies may affect your browsing experience.
Necessary Always Enabled
Necessary cookies are absolutely essential for the website to function properly. These cookies ensure basic functionalities and security features of the website, anonymously.
Functional
Functional cookies help to perform certain functionalities like sharing the content of the website on social media platforms, collect feedbacks, and other third-party features.
Performance
Performance cookies are used to understand and analyze the key performance indexes of the website which helps in delivering a better user experience for the visitors.
Analytics
Analytical cookies are used to understand how visitors interact with the website. These cookies help provide information on metrics the number of visitors, bounce rate, traffic source, etc.
Advertisement
Advertisement cookies are used to provide visitors with relevant ads and marketing campaigns. These cookies track visitors across websites and collect information to provide customized ads.
Others
Other uncategorized cookies are those that are being analyzed and have not been classified into a category as yet.
SAVE & ACCEPT
Home » This Lovable ‘Window Washing’ Dog Used His Special Talents To Find The Perfect New Home