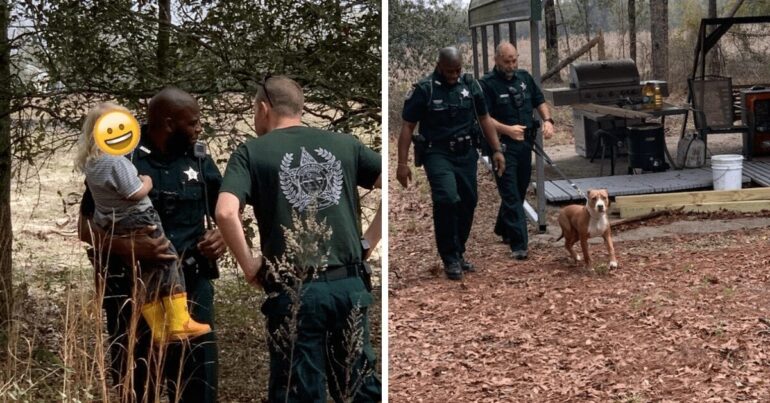 One mother’s frantic search for her lost toddler could have ended a lot differently if it wasn’t for a family dog named Buddy. The little boy wandered away from his siblings while they were all playing in the yard, but Buddy never left his side. The big dog protected his littlest family member until help arrived, and he’s been deemed a four-legged hero.

According to Suwannee County Sheriff’s Office, the boy’s mother dialed 911 as soon as she realized her three-year-old was missing. She told the dispatcher that her family’s dog was also missing. It could have been a poorly timed coincidence, but she hoped her loyal dog was with her missing child.
Suwannee County patrol deputies, investigators, and K9 units from Suwannee Correctional Institution responded to the call and led the search. The group started close to the boy’s home and slowly expanded their search radius.
While police were scouring the area, the 911 dispatch center received yet another call from the local area. This one was from a man who found a small child and a dog in the woods behind his house. The man said the dog was watching over the child and wouldn’t let anyone get too close.
When police arrived on scene, Buddy ran up to them. Body cam footage shows Buddy approaching the officers and leading them directly to where the boy was located. The family dog seemed to know the men in uniform were there to help.
Sheriff Sam St. John told WCTV,

“It was such a good ending to something that could have been tragic. We’re all the time putting out tragic news. I’m telling you, it feels so good, so good to tell a good story.”

Watch news coverage of the search below.

Thanks to the neighbor and Buddy, police were able to reunite a desperate family. They report that the little boy was not injured, and he and Buddy are both home safe.
Way to go, Buddy!
Learn more about American Staffordshire Terriers here!

This website uses cookies to improve your experience while you navigate through the website. Out of these, the cookies that are categorized as necessary are stored on your browser as they are essential for the working of basic functionalities of the website. We also use third-party cookies that help us analyze and understand how you use this website. These cookies will be stored in your browser only with your consent. You also have the option to opt-out of these cookies. But opting out of some of these cookies may affect your browsing experience.
Necessary Always Enabled
Necessary cookies are absolutely essential for the website to function properly. These cookies ensure basic functionalities and security features of the website, anonymously.
Functional
Functional cookies help to perform certain functionalities like sharing the content of the website on social media platforms, collect feedbacks, and other third-party features.
Performance
Performance cookies are used to understand and analyze the key performance indexes of the website which helps in delivering a better user experience for the visitors.
Analytics
Analytical cookies are used to understand how visitors interact with the website. These cookies help provide information on metrics the number of visitors, bounce rate, traffic source, etc.
Advertisement
Advertisement cookies are used to provide visitors with relevant ads and marketing campaigns. These cookies track visitors across websites and collect information to provide customized ads.
Others
Other uncategorized cookies are those that are being analyzed and have not been classified into a category as yet.
SAVE & ACCEPT
Home » Loyal Family Dog Protects Lost 3-Year-Old Boy Until Police Arrive To Help