Home » Canine 411: All About The Boxer Dog Breed

Canine 411: All About The Boxer Dog Breed 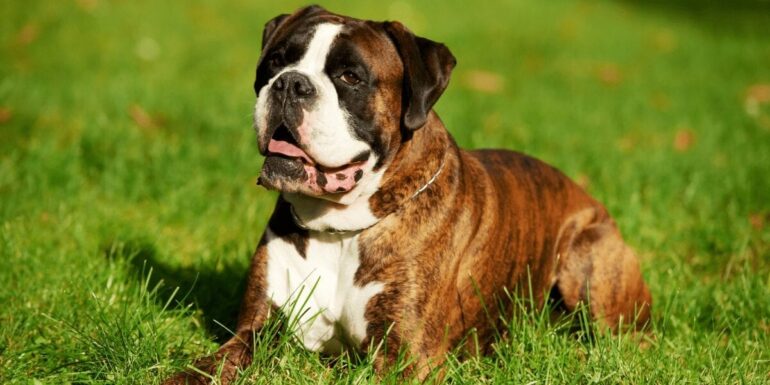 It’s hard not to love boxers. Named for their distinctive look when standing on their hindquarters’ boxing’, they are a famous mid-sized guard dog with a unique set of features. Boxers have been used as guide dogs, military dogs, cattle dogs, and athletes. And Boxers are charismatic and love to be with their people. But what sets the Boxer dog breed apart from other mid-sized canines and keeps lovers of the breed coming back for more?

Read on to discover all Boxer dog breed… 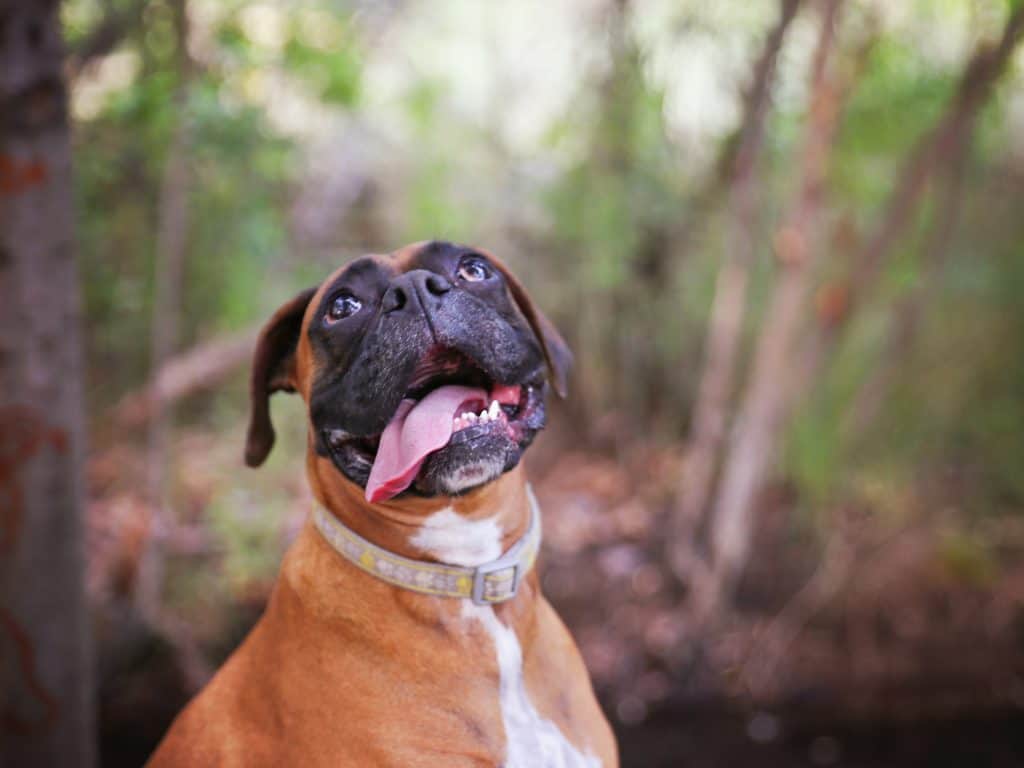 Boxers were initially much larger in appearance.

While the boxer breed as we know it has only been around since the late 1800s, they can trace their genealogy as far back as medieval Germany. Then, the now extinct Bullenbeisser was a popular breed of hunting dog for German noblemen as its large size made it able to easily hunt big game like bears, deer, and wild boar. When the feudal system eventually crumbled, there was no longer a demand for the larger canines. They were slowly crossbred with smaller breeds until they finally settled into the modern Boxer we know today. In 1895, the first boxer club was founded in Munich. They went on to publish a breed standard in 1904. 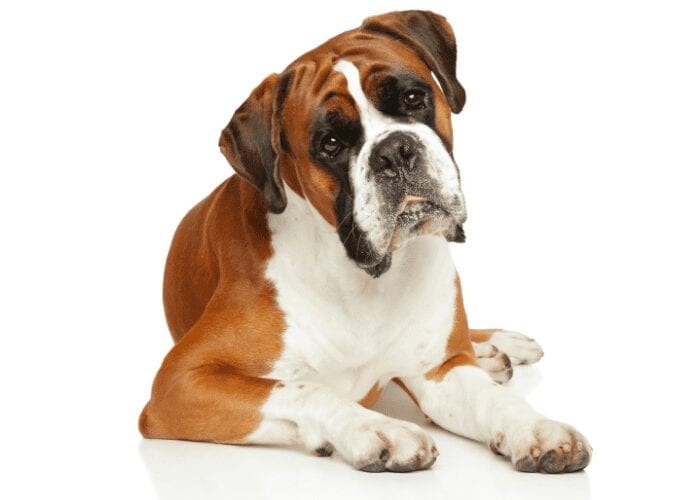 The boxer dog breed didn’t arrive in America until the late 1930s.

All American boxers can trace their lineage back to “the four Horsemen of Boxerdom.” These four male Boxers, Sigurd, Lustig, Utz, and Dorian, were all considered paragons of their breed and sired many puppies that would form the foundation of the American breed. Currently, the American Kennel Club lists Boxers as the 14th most popular dog in America, beating out Great Danes, Siberian Huskies, and Doberman Pinschers for the spot. 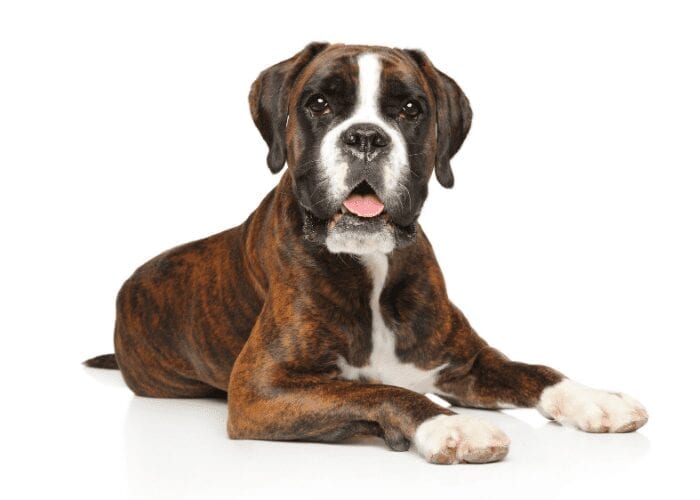 Boxers have either fawn or Brindle colored coats, often with a white underbelly and matching feet.

The Boxer’s traditional look has come under fire recently as any animal rights activists believe cosmetic procedures such as ear cropping and tail docking are an unnecessary risk. Thankfully, more and more Boxers are going ‘au natural’ as the standard changes.
When showing Boxers, the size and overall construction of the head plays a crucial role in the judging process. The ideal muzzle should be “1⁄3 the length of the head from the occiput to the tip of the nose, and 2⁄3 the width of the skull.” Unfortunately, this distinctive shape can sometimes cause difficulty breathing. Boxer owners are encouraged to monitor their dog’s on sweltering days so that they don’t accidentally overwork their airways and collapse. 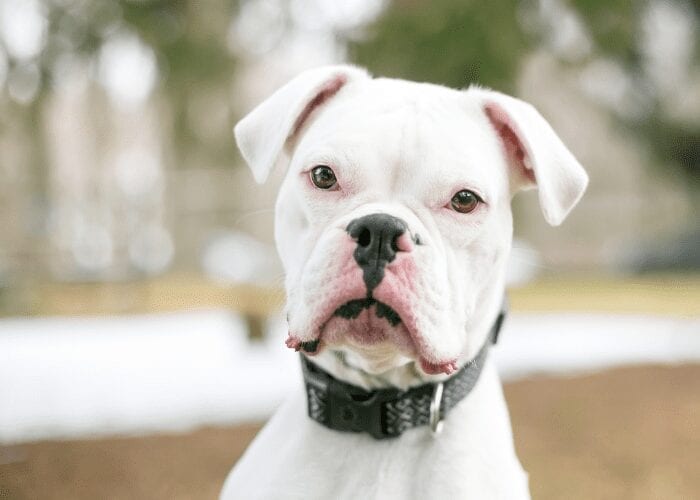 Roughly 25% of boxers are white in appearance.

This is due to an extreme piebald gene covering the existing fawn or brindle markings with a white overlay. In the past, most Breeders euthanized white Boxer pups as they were more prone to congenital deafness and carried a higher risk of skin cancer, but nowadays, most breeders chose to neuter them and adopt them out to loving homes. 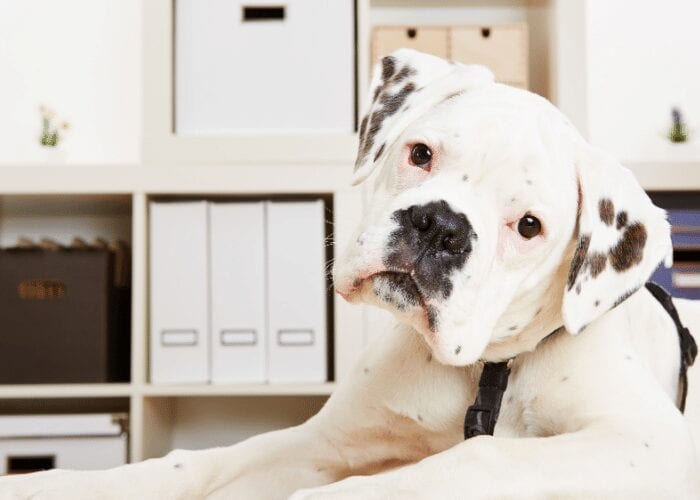 These dogs are incredibly loyal to their families and are notoriously great with children. They can be a bit defensive when meeting strangers, but can easily overcome that with proper training. Any Boxer owner will attest these dogs can be stubborn in certain situations. But, it’s all worth it to see them happily do their signature “kidney Bean” dance.

Did you learn anything new and interesting about our canine companions? Share this article with another dog lover that you know so they can learn something, too.

This website uses cookies to improve your experience while you navigate through the website. Out of these, the cookies that are categorized as necessary are stored on your browser as they are essential for the working of basic functionalities of the website. We also use third-party cookies that help us analyze and understand how you use this website. These cookies will be stored in your browser only with your consent. You also have the option to opt-out of these cookies. But opting out of some of these cookies may affect your browsing experience.
Necessary Always Enabled
Necessary cookies are absolutely essential for the website to function properly. These cookies ensure basic functionalities and security features of the website, anonymously.
Functional
Functional cookies help to perform certain functionalities like sharing the content of the website on social media platforms, collect feedbacks, and other third-party features.
Performance
Performance cookies are used to understand and analyze the key performance indexes of the website which helps in delivering a better user experience for the visitors.
Analytics
Analytical cookies are used to understand how visitors interact with the website. These cookies help provide information on metrics the number of visitors, bounce rate, traffic source, etc.
Advertisement
Advertisement cookies are used to provide visitors with relevant ads and marketing campaigns. These cookies track visitors across websites and collect information to provide customized ads.
Others
Other uncategorized cookies are those that are being analyzed and have not been classified into a category as yet.
SAVE & ACCEPT
Home » Canine 411: All About The Boxer Dog Breed