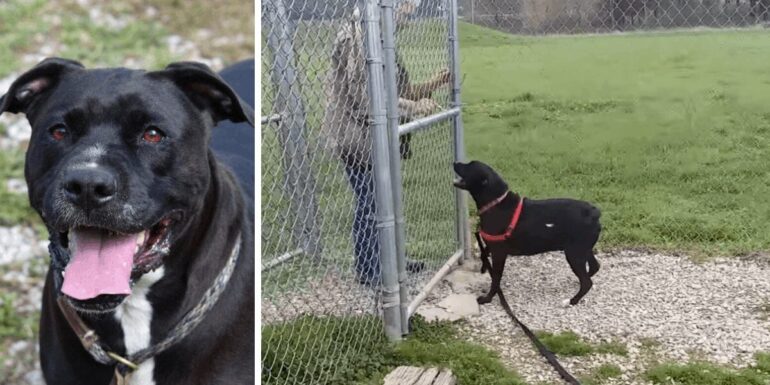 When Moby first arrived at the Brown County Humane Society in December 2017, he was terrified and confused. Details about his past aren’t clear, but rescuers know he was shot at least once and lost his previous home after his owner was arrested. Since then, the sweet dog has faced an uphill battle.

Life hasn’t always been easy, but Moby is now (finally!) on his way to a better life.

“Today was a day that our entire staff has been waiting so long for. It was bittersweet to watch Moby go off to his new home. I will miss his snaggletooth smile and goofy personality, but I could not be more excited for his future. Thank you to his new owners for giving him the chance to live his best life.”

Moby lived at the shelter for years while dedicated staff and volunteers worked to help him overcome his fear and anxiety. Due to traumatic past experiences, Moby had trouble believing that not all humans would hurt him. It wasn’t his fault, and rescuers worked with him every day to show him a different kind of life.

It took time and patience, but Moby has made incredible improvement.

He’s still wary of strangers, but his true personality is one full of love and energy. Moby loves his special friends at the shelter and enjoys going on car rides and trips to the lake. His tail wags a mile a minute when he sees someone he knows.

While everyone at the shelter loves Moby, they knew he deserved better. Thanks to continual training, he was ready for a real home. But the problem was, he isn’t your average dog. Shelter staff realized that finding Moby the ideal home wouldn’t be easy. He needed a home with no young children and a family that would understand certain limitations.
Moby will never be the dog you see socializing with strangers at the park. He will never feel comfortable at a large family gathering. But that doesn’t mean he’s less deserving of love.
For years, shelter staff looked for Moby’s perfect family. And amidst the COVID-19 lockdown, they found them!

To ensure Moby found his perfect match, his adopters visited him at the shelter several times. They spent one-on-one time getting to know him and gave him the chance to feel comfortable around them. Moby also visited his potential new home for a trial-run.
After all of that, Moby’s new family knew they wanted him to be a permanent part of their lives. They put in the work to earn his trust and are committed to showing him what life can be like outside a shelter. Moby clearly loves his new people, and he’s proof that great things come with time.
You can help more dogs like Moby by visiting the Brown County Humane Society website and by following them on Facebook.
Want more heartwarming news? Click here to read about a dog working from home to help abused and neglected kids.

This website uses cookies to improve your experience while you navigate through the website. Out of these, the cookies that are categorized as necessary are stored on your browser as they are essential for the working of basic functionalities of the website. We also use third-party cookies that help us analyze and understand how you use this website. These cookies will be stored in your browser only with your consent. You also have the option to opt-out of these cookies. But opting out of some of these cookies may affect your browsing experience.
Necessary Always Enabled
Necessary cookies are absolutely essential for the website to function properly. These cookies ensure basic functionalities and security features of the website, anonymously.
Functional
Functional cookies help to perform certain functionalities like sharing the content of the website on social media platforms, collect feedbacks, and other third-party features.
Performance
Performance cookies are used to understand and analyze the key performance indexes of the website which helps in delivering a better user experience for the visitors.
Analytics
Analytical cookies are used to understand how visitors interact with the website. These cookies help provide information on metrics the number of visitors, bounce rate, traffic source, etc.
Advertisement
Advertisement cookies are used to provide visitors with relevant ads and marketing campaigns. These cookies track visitors across websites and collect information to provide customized ads.
Others
Other uncategorized cookies are those that are being analyzed and have not been classified into a category as yet.
SAVE & ACCEPT
Home » Dog With The Longest Stay In Shelter’s History Finds New Home After 848 Days