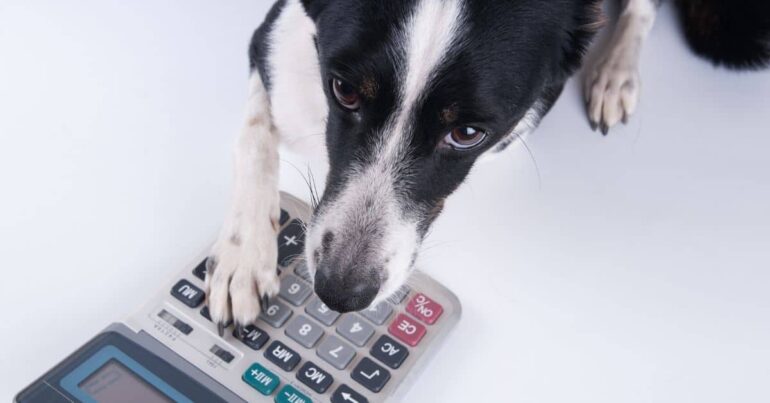 A team of researchers from Emory University has determined dogs are even smarter than we think.

Man’s best friend is a pro when it comes to learning things like “sit” and “shake.” There’s even a dog named Stella who is learning how to talk using a special sound board. It’s always been clear that canines are intelligent animals. But dogs and numbers don’t seem to go together. You don’t see your pup doing complex mathematics, after all. But neuroscientist Gregory Berns has uncovered exciting information related to canine intelligence. It turns out that even untrained dogs have an innate ability to recognize numbers and quantity. In other words, dogs can count!
For his study, Berns and his colleagues gathered 11 dogs of different breeds. There were a few pit mixes, Border Collies, and retriever mixes. Their goal was to find out if dogs experience brain activity that would indicate a knack for numbers.
Before they could get started, all the dogs were trained to voluntary enter an MRI machine and remain motionless.  This was a key part of the experiment. They were taught to enter the scanner, rest their heads on a block, and look toward a screen at the opposite end.

Check out this video showing how the dogs did it.

For the experiment, each of the dogs was shown a series of images that included any number of gray dots on a black background. The number and/or size of the dogs changed every 300 milliseconds. While the dogs were watching the images, scientists monitored their brain scans to look for activity that would be associated with numbers and quantity.
What they found is that dogs process numbers in the same area of the the brain as humans. Eight out of the eleven dogs showed brain activity when the number of dots changed—indicating they were processing the difference in quantity. When the dogs saw four large dots switch to nine large dots, their brains took notice. But when the four large dots changed to four small dots, that area of their brain remained quiet.
Krista Macpherson, a canine cognition researcher, said in Science Magazine,

Canine 411: All About The Golden Retriever

This experiment shows that while some dogs can be taught to count, the canine brain is biologically wired to have at least a basic understanding of numbers. The best way to describe it is how humans can tell the difference between one slice of pizza and a whole pie. Dogs can look at two piles of treats and know which one has the most. They can’t tell you exactly how many there are without a little training, but don’t underestimate their intelligence.

This website uses cookies to improve your experience while you navigate through the website. Out of these, the cookies that are categorized as necessary are stored on your browser as they are essential for the working of basic functionalities of the website. We also use third-party cookies that help us analyze and understand how you use this website. These cookies will be stored in your browser only with your consent. You also have the option to opt-out of these cookies. But opting out of some of these cookies may affect your browsing experience.
Necessary Always Enabled
Necessary cookies are absolutely essential for the website to function properly. These cookies ensure basic functionalities and security features of the website, anonymously.
Functional
Functional cookies help to perform certain functionalities like sharing the content of the website on social media platforms, collect feedbacks, and other third-party features.
Performance
Performance cookies are used to understand and analyze the key performance indexes of the website which helps in delivering a better user experience for the visitors.
Analytics
Analytical cookies are used to understand how visitors interact with the website. These cookies help provide information on metrics the number of visitors, bounce rate, traffic source, etc.
Advertisement
Advertisement cookies are used to provide visitors with relevant ads and marketing campaigns. These cookies track visitors across websites and collect information to provide customized ads.
Others
Other uncategorized cookies are those that are being analyzed and have not been classified into a category as yet.
SAVE & ACCEPT
Home » Science Shows Dogs Can Count… Sort Of