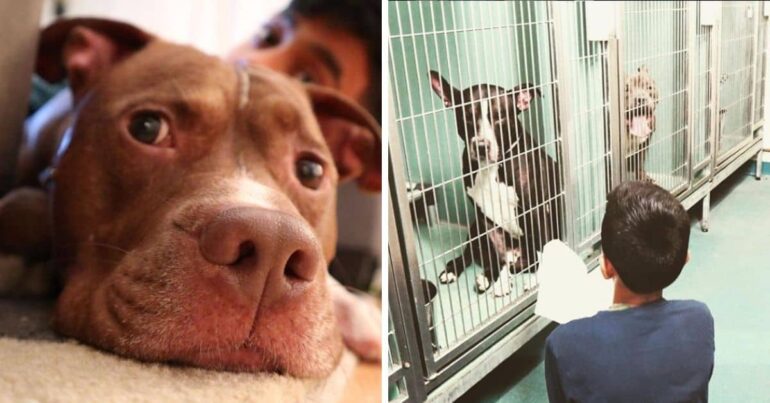 At only 10 years old, Evan B. has already learned a valuable life lesson. He knows that you don’t need to be rich, or even out of school, to make an important impact on the world. Evan has learned that all you really need is a little kindness…and maybe a book. This wise 10-year-old from the Bronx is proving that theory every weekend when he reads to rescue dogs at the Animal Care Centers of NYC. He doesn’t do it for attention, or even the occasional puppy cuddles, he does it because he wants to help rescue dogs feel safe, happy, and at home.

Listening to Evan read is soothing for the dogs.

Evan first started reading to rescues after he and his mom found a dog tied to a fence. They brought the dog to ACC and were thrilled when he was adopted. While at the shelter, Evan’s mom learned about a volunteer program that allowed kids to read to dogs in their kennels.
The program is called Books for Boroughbreds, and Evan couldn’t wait to join.
He told Buzzfeed,

“I always wanted to work with dogs and I was excited when she told me that I could read to them!”

The goal behind Books for Boroughbreds is to offer rescue dogs an opportunity to relax and be comfortable around people. Many of the dogs that enter the shelter come from worlds where they were abused or neglected. They’re stressed, scared, and worried about being in an unfamiliar environment.

By reading out loud, Evan helps the dogs relax. He sits calmly outside their kennels and reads whatever books he can find. Sometimes the dogs start the session by anxiously pacing or cowering. But by the end of the book, Evan says most dogs end up laying quietly or even snoring in their beds. The calming interaction helps the stressed out dogs feel safe as they transition into life at the shelter. And it also benefits them when they get adopted. Thanks to Evan, the dogs are more accustomed to listening and being around people.
Evan looks forward to his time volunteering as a way to make a real difference for every animal he meets. He says,

“The most rewarding experience is when I try to specifically  help an at-risk dog and I can almost immediatley see the impact and how they react to me reading to them.”

Evan and his mom share videos of the dogs to help them get adopted.

Along with reading to the rescues, Evan also helps the shelter in other ways. He shares pictures and videos of the dogs on social media in hopes of getting them adopted. He also helped raise $1,000 by selling t-shirts.
Above all, Evan wants to spread the message that every rescue dog deserves a chance at a good life.

“I think most people think that shelter dogs are not ‘good’ because they went through things and had bad things happen in their past. They are ALL good. All dogs are good–they’re just scared and they need love and they just need to know someone is on their side.”

Evan may be young, but his actions are inspiring. By doing something as simple as reading a book, he’s spreading kindness and helping dogs find the love they deserve.
If you’re inspired by Evan, follow him on Instagram.

This website uses cookies to improve your experience while you navigate through the website. Out of these, the cookies that are categorized as necessary are stored on your browser as they are essential for the working of basic functionalities of the website. We also use third-party cookies that help us analyze and understand how you use this website. These cookies will be stored in your browser only with your consent. You also have the option to opt-out of these cookies. But opting out of some of these cookies may affect your browsing experience.
Necessary Always Enabled
Necessary cookies are absolutely essential for the website to function properly. These cookies ensure basic functionalities and security features of the website, anonymously.
Functional
Functional cookies help to perform certain functionalities like sharing the content of the website on social media platforms, collect feedbacks, and other third-party features.
Performance
Performance cookies are used to understand and analyze the key performance indexes of the website which helps in delivering a better user experience for the visitors.
Analytics
Analytical cookies are used to understand how visitors interact with the website. These cookies help provide information on metrics the number of visitors, bounce rate, traffic source, etc.
Advertisement
Advertisement cookies are used to provide visitors with relevant ads and marketing campaigns. These cookies track visitors across websites and collect information to provide customized ads.
Others
Other uncategorized cookies are those that are being analyzed and have not been classified into a category as yet.
SAVE & ACCEPT
Home » The World Needs More People Like This Boy Who Reads To Rescue Dogs