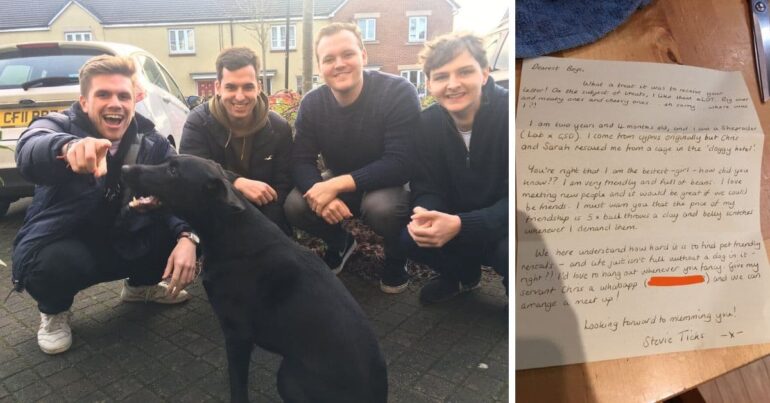 An Englishman, a Welshman, and two Scots move to an apartment in Bristol.

No, this isn’t the intro to a bad joke, it’s the start of a seriously adorable story of neighborly kindness and a dog named Stevie Ticks.
Jack McCrossan and his three friends are all engineers who moved to the city for their careers. Life was pretty good for the boys from apartment 23, but they couldn’t help be bummed about one important thing. They had all grown up with dogs, but their landlord had a strict no pets policy.

Adopting a dog of their own wasn’t an option, but that didn’t stop the boys from trying to find a best furry friend.

When they saw a cute doggo looking out the window of their neighbor’s apartment, they got an idea. They didn’t know their new neighbor personally, but they decided to reach out. They wrote a letter to the dog’s family and left it on their door. Basically, their letter was a polite plea to let them become friends with the dog they’d only seen from behind the window glass.
They wrote,

The boys weren’t sure if they’d even get a response. But soon after, they got a wonderful surprise.

Not only did they get a response, they got a personalized letter sent from the dog herself. The envelope came addressed to “The Boys” and was stamped with a paw print. Jack and his friends were thrilled to read that their neighbor dog was named Stevie Ticks, and they were right in assuming she was the goodest girl ever.
The letter started with,

“What a treat it was to receive your letter! On the subject of treats, I like them a LOT. Big ones and meaty ones and cheesy ones… oh sorry… where was I?!”

Stevie Ticks went to say how she would be thrilled to make the  boys’ acquaintance and become best buddies.

And that my dog loving friends, was all it took.

Stevie Ticks’ family, Chris and Sarah, rescued her after she was hit by a car in Cyprus. She was eventually sent to a rescue in the UK where Chris and Sarah fell in love with her. They brought her home, and she’s been their constant friend ever since.
And now she’s also friends with the boys from 23. Steveie Ticks met her new friends on December 15, and true to her word, she was ecstatic to see them. Jack said,

“Meeting Stevie was great! She was definitely as energetic as described. We got to take her for a walk and she wouldn’t stop running!”

Chris and Sarah are fully supporting Stevie’s new extra curricular activities. While some people might have ignored a random letter from strangers posted to their door, Stevie’s family is happy for the opportunity to spread some doggo love. Sarah said,

“In a day and age where people don’t really know or speak to their neighbors, it was really nice for them to break down that barrier. We obviously know that Stevie is a very special hound, but we love that she has brought so much joy and love to so many people. I think everyone just needs a reminder every now and then that humanity is found in the small things.”

Stevie and the boys have already had at least two play dates, and they’ve set up a group chat with Chris and Sarah to arrange future meetups. The dog is happy to have more friends to play with, and the boys are glad to once again have a dog in their lives.
Stevie even has her own Instagram
Featured image via Twitter/Jack McCrossan

This website uses cookies to improve your experience while you navigate through the website. Out of these, the cookies that are categorized as necessary are stored on your browser as they are essential for the working of basic functionalities of the website. We also use third-party cookies that help us analyze and understand how you use this website. These cookies will be stored in your browser only with your consent. You also have the option to opt-out of these cookies. But opting out of some of these cookies may affect your browsing experience.
Necessary Always Enabled
Necessary cookies are absolutely essential for the website to function properly. These cookies ensure basic functionalities and security features of the website, anonymously.
Functional
Functional cookies help to perform certain functionalities like sharing the content of the website on social media platforms, collect feedbacks, and other third-party features.
Performance
Performance cookies are used to understand and analyze the key performance indexes of the website which helps in delivering a better user experience for the visitors.
Analytics
Analytical cookies are used to understand how visitors interact with the website. These cookies help provide information on metrics the number of visitors, bounce rate, traffic source, etc.
Advertisement
Advertisement cookies are used to provide visitors with relevant ads and marketing campaigns. These cookies track visitors across websites and collect information to provide customized ads.
Others
Other uncategorized cookies are those that are being analyzed and have not been classified into a category as yet.
SAVE & ACCEPT
Home » Dog Named Stevie Ticks Writes The Best Letter To Four Guys Dying To Be Her Friend