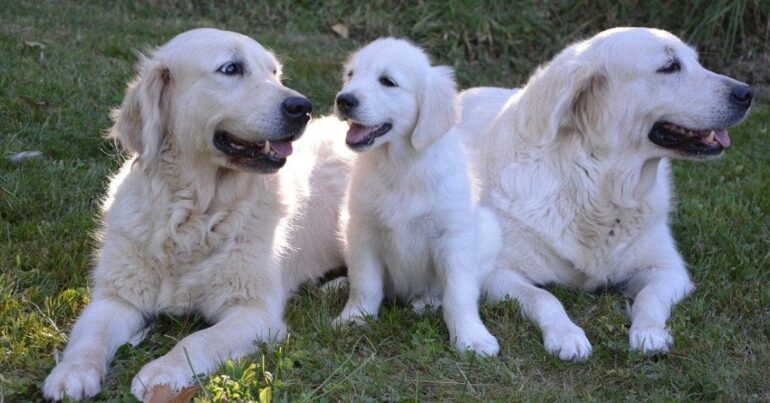 We’ve always been taught that dogs age differently than humans.

We learned when we were young little dog lovers that multiplying our dogs’ ages by seven would tell us how old they were in “human years.” It was a fun game, but it wasn’t exactly accurate. New research on how canine age compares to human age indicates we should be using an entirely different formula. I’ve never been a fan of math, but thankfully, there’s a handy new dog age calculator to help us out.
To come up with the formula, researchers analyzed genomes of 104 Labrador Retrievers of varying ages. The youngest dogs were around four weeks old, and some of the oldest had already hit the 16-year milestone. The study looked at something called DNA methylation to determine a dog’s epigentic clock.  In other words, they wanted to know at what rate dogs age and how that compares to humans. Part of the findings reflect what we already know: dogs and humans have similar life stages. Dogs go from babies, to teens, to adults, and to seniors while experiencing the same biological changes as humans. Puppies go through teething, puberty marks an important transition, and health conditions become more common with age.
Besides confirming what we already knew, the study also sheds light on that old “multiply by seven” rule. This formula was originally based on the fact that the average human lifespan is around 80 years old, and the average dog lives to be around 12. It assumes that dogs age at a consistent rate, but we now know that’s not true. One of the biggest issues with the old rule is that different dog breeds have different lifespans. Giant breeds, like Great Danes, only live to be around 8 years old. Chihuahuas, on the other hand, regularly live to be around 16. New research also shows that while dogs age in a similar trajectory as humans, the speed at which they age isn’t consistent. A dog’s biological clock ticks quickly at first, and then it gradually slows down. So dogs do a lot of aging in their younger years, and as they get older, they age more slowly.
This key discovery means the old dog age calculator is too simplified and inaccurate. The new formula is more complicated. You take the dog’s age, multiply it by 16 and then add 31. For those of us who never payed attention in math class, you can use the dog age calculator published with the original study.
The new formula is the most accurate equation we have, but it still doesn’t fully cover the issue of different breeds having different lifespans. A new project open to all dog breeds will hopefully get us even closer to learning the exact ages of our favorite furry friends.

This website uses cookies to improve your experience while you navigate through the website. Out of these, the cookies that are categorized as necessary are stored on your browser as they are essential for the working of basic functionalities of the website. We also use third-party cookies that help us analyze and understand how you use this website. These cookies will be stored in your browser only with your consent. You also have the option to opt-out of these cookies. But opting out of some of these cookies may affect your browsing experience.
Necessary Always Enabled
Necessary cookies are absolutely essential for the website to function properly. These cookies ensure basic functionalities and security features of the website, anonymously.
Functional
Functional cookies help to perform certain functionalities like sharing the content of the website on social media platforms, collect feedbacks, and other third-party features.
Performance
Performance cookies are used to understand and analyze the key performance indexes of the website which helps in delivering a better user experience for the visitors.
Analytics
Analytical cookies are used to understand how visitors interact with the website. These cookies help provide information on metrics the number of visitors, bounce rate, traffic source, etc.
Advertisement
Advertisement cookies are used to provide visitors with relevant ads and marketing campaigns. These cookies track visitors across websites and collect information to provide customized ads.
Others
Other uncategorized cookies are those that are being analyzed and have not been classified into a category as yet.
SAVE & ACCEPT
Home » There’s A New Dog Age Calculator That’s Better Than Multiplying By Seven