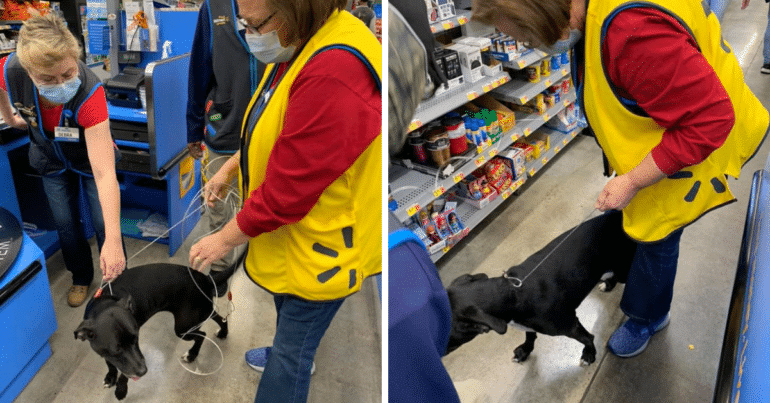 Whenever someone loses a dog, whether they get lost, are stolen, or pass away, it’s always a heartbreaking experience. That situation is even more tragic when it happens around the holidays. When June Rountree’s four-year-old rescue dog named Abby went missing in November, the Alabama native faced the real possibility of going through the holiday season without her best four-legged friend. But thanks to an incredible twist of fate and miraculous good luck, June and Abby are together once again.
When Abby first went missing, June and her husband did everything they were supposed to. They talked to neighbors, called Abby’s name, and contacted every animal shelter they could think of. Their biggest hope was to find Abby quickly safe and sound, but that’s not what happened.
Despite their search efforts, three weeks passed without any sign of Abby. June had no idea what happened after she realized Abby had slipped out of her harness and leash. She didn’t know if her beloved dog was wandering around somewhere nearby, if someone had found her, or even if she was alive. Abby’s absence and the unknowns surrounding her disappearance put a shadow over the impending holidays.
June had no leads on Abby’s whereabouts, but it turns out that she didn’t need one. While she was worried about how she was going to find Abby, Abby was the one who found her—and she did it in a way that is baffling everyone, especially June.

It happened while June was working her regular shift at Walmart a few days after Thanksgiving. There was a commotion in the store because a dog walked through the doors seemingly unaccompanied. June noticed that the dog was the same color and size as her missing Abby, but she didn’t actually think it could be her. But when she called Abby’s name, and the dog ran directly toward her, she couldn’t deny what she was seeing.
By some miracle, Abby walked into Walmart that day and was reunited with her family. A co-worker caught the amazing moment on camera, and the post has since gone viral. June told PEOPLE,

“I bent over and hugged her. I completely lost it then. I couldn’t speak. I was in complete shock and just couldn’t believe it. How she knew I worked there, I do not know.”

Does Your Dog Dream About You? A Psychologist Might Have Your Answer

Abby had been missing for weeks, but June said she looked and acted just like normal. She believes someone must have been feeding her, and for that, she’s grateful.
It doesn’t matter whether Abby showed up at Walmart because she could somehow sense that’s where she would find her family, or if it was just an incredible coincidence. The only thing that matters is that Abby is safely back home and with her family.

This website uses cookies to improve your experience while you navigate through the website. Out of these, the cookies that are categorized as necessary are stored on your browser as they are essential for the working of basic functionalities of the website. We also use third-party cookies that help us analyze and understand how you use this website. These cookies will be stored in your browser only with your consent. You also have the option to opt-out of these cookies. But opting out of some of these cookies may affect your browsing experience.
Necessary Always Enabled
Necessary cookies are absolutely essential for the website to function properly. These cookies ensure basic functionalities and security features of the website, anonymously.
Functional
Functional cookies help to perform certain functionalities like sharing the content of the website on social media platforms, collect feedbacks, and other third-party features.
Performance
Performance cookies are used to understand and analyze the key performance indexes of the website which helps in delivering a better user experience for the visitors.
Analytics
Analytical cookies are used to understand how visitors interact with the website. These cookies help provide information on metrics the number of visitors, bounce rate, traffic source, etc.
Advertisement
Advertisement cookies are used to provide visitors with relevant ads and marketing campaigns. These cookies track visitors across websites and collect information to provide customized ads.
Others
Other uncategorized cookies are those that are being analyzed and have not been classified into a category as yet.
SAVE & ACCEPT
Home » Missing Dog Wanders Into Walmart To Find Long-Lost Family