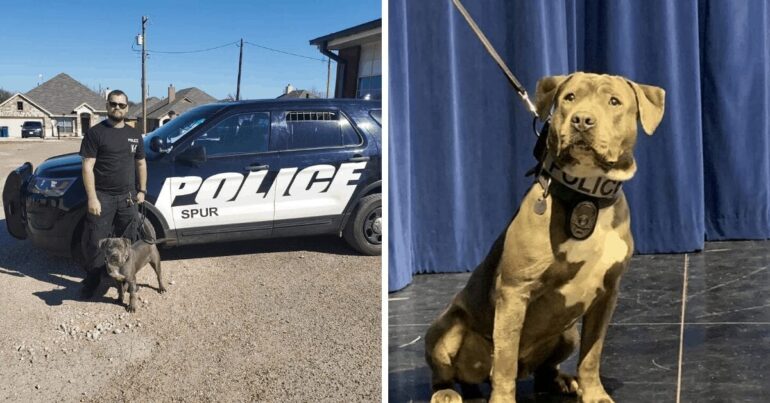 The city of Spur, TX has a new superstar helping keep their community safe. His name is K9 Dodger, and he isn’t your average drug detection dog. Dodger came from an animal shelter where his chances of finding a home weren’t great. But that was before Animal Farm Foundation recognized his potential.
The nonprofit organization chose him to be a part of their Detection Dog Grant Program, and he’s already proving that dogs don’t need a pedigree to do big things.

Facebook
Most of the K9s you see working with police or military are purebred pups that are literally born into professional roles. These detection dogs can cost a police department $10,000 – $20,000, and that puts serious limitations on small communities. They can’t afford those specially bred K9s, but that doesn’t mean they’re out of options.
Animal Farm Foundation scours animal shelters across the country looking for dogs with specific personalities. They look for dogs with high energy and work ethic. They’re often the dogs that have a harder time getting adopted, because without proper training, they can be a lot to handle. But with the right guidance and a second chance, shelter dogs can become successful working K9s. The best part is, AAF trains the dogs and sends them to police departments free of charge.
AAF believes all dogs are individuals. They shouldn’t be judged or categorized because of their breed or background, they should be valued for the unique characteristics they have to offer. Once AAF selects a dog with potential, they enroll them into an extensive training program with Sector K9. If they pass, they don’t waste any time getting to work.

Facebook
Dodger and his handler, Officer Eric Keaton, recently graduated from drug detection training in Ferris, TX. Dodger learned how to sniff out and alert to specific drugs, and now he’s an official member of the Spur Police Department. Eager to get to work, this newbie showed off his skills during his very first shift.
KCBD reports that about 7 hours into his first shift, K9 Dodger alerted to a scent coming from an abandoned camper. Officers followed the newly minted drug detection dog into the camper and saw him alert to a wooden box. With further inspection, officers uncovered 14.3 grams of methamphetamine.
In a matter of hours, K9 Dodger proved that shelter dogs have so much to offer. They aren’t purpose-bred, and they don’t have pedigrees, but that doesn’t matter. When you give them a chance, there’s no limit to what they can accomplish.
Way to go, K9 Dodger!
h/t: KCBD

This website uses cookies to improve your experience while you navigate through the website. Out of these, the cookies that are categorized as necessary are stored on your browser as they are essential for the working of basic functionalities of the website. We also use third-party cookies that help us analyze and understand how you use this website. These cookies will be stored in your browser only with your consent. You also have the option to opt-out of these cookies. But opting out of some of these cookies may affect your browsing experience.
Necessary Always Enabled
Necessary cookies are absolutely essential for the website to function properly. These cookies ensure basic functionalities and security features of the website, anonymously.
Functional
Functional cookies help to perform certain functionalities like sharing the content of the website on social media platforms, collect feedbacks, and other third-party features.
Performance
Performance cookies are used to understand and analyze the key performance indexes of the website which helps in delivering a better user experience for the visitors.
Analytics
Analytical cookies are used to understand how visitors interact with the website. These cookies help provide information on metrics the number of visitors, bounce rate, traffic source, etc.
Advertisement
Advertisement cookies are used to provide visitors with relevant ads and marketing campaigns. These cookies track visitors across websites and collect information to provide customized ads.
Others
Other uncategorized cookies are those that are being analyzed and have not been classified into a category as yet.
SAVE & ACCEPT
Home » Shelter Dog Makes Impressive Drug Bust During His First Day As A K9 Officer