Volunteers Help Stolen Dog Travel 2,000 Miles To Make It Home For The Holidays 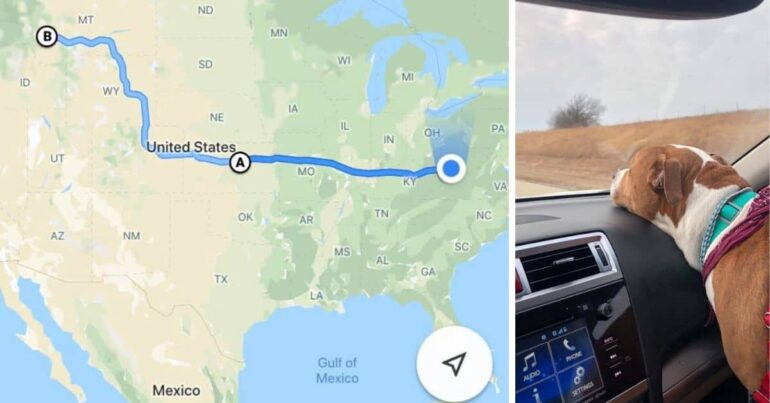 A friendly pit bull mix named Zeus has had a whirlwind past few days.

Zeus has met dozens of new friends, traveled through nine new states, and posed for countless pictures. He even made it on to the evening news. His adventure has been both exciting and exhausting, but everything that’s happened has been for one important purpose. Stolen from his home back in October, Zeus’ family didn’t think they’d ever see their sweet dog again. But thanks to a microchip and an incredible network of volunteers, this happy dog has finally made it home for the holidays.

When Zeus was first taken from his home in Butte, Montana, his family was devastated. He belongs to a single mom with two little girls, and Zeus was stolen from them along with money and other valuables. The thief was eventually apprehended all the way across the country in Nitro, West Virginia.  He still had Zeus, and the dog was taken to the Kanawha-Charleston Humane Association. At first, no one knew Zeus’s story. But thanks to a microchip, shelter officials put the pieces together. They contacted Zeus’s family 2,000 miles away and started planning his safe return.

Reuniting a dog with a family on the other side of the country was a big plan.

They needed volunteers willing to drive different legs of the journey along with money for gas, overnight stays, food, and other travel supplies. Even with all that, organizing the trip and coordinating with volunteers was a huge effort. To make it happen, KCHA joined forces with Many Paws Volunteer Transport. Zeus’s future was in the hands of these volunteers, and no one was willing to let him down.

Despite the commitment and work, letting the stolen dog spend Christmas in a shelter simply wasn’t an option. It took about two weeks to organize a cross-country road trip that would take Zeus from Charleston, West Virginia to Butte, Montana. When the big day of his departure finally came, shelter staff were overjoyed to help make this happy ending happen. Before he left, Tiffany Steele, KCHA playgroup monitor, said,

“We are so happy for you Zeus we are going to dearly miss you here but we are happy to get you’ll get the best Christmas gift ever and that’s to be reunited with your family.”

Zeus traveled hundreds of miles that first day and spent the night safely in St. Louis.

From there, he was back in the car for a trip across the Midwestern states. Dozens of volunteers from across the country worked together to complete the 30-leg journey. They drove through snow, rain, and rush-hour traffic before handing Zeus off to his next transporter.

Through it all, the shelter says Zeus never got tired of thanking his helpers with warm kisses. He enjoyed meeting new people and watching the scenery, but it all came down to the final hand off.
After weeks away from home and four days in the car, the stolen dog was finally reunited with his family on December 17. The last of the volunteers chauffeured Zeus 450 miles from Laramie, Wyoming to Butte, Montana. When he burst through the doors, his entire family surrounded him with hugs. Zeus jumped up in joy and covered his mom and sisters in sloppy kisses. It was the moment everyone had waited for.
Zeus is finally at home where he belongs just in time for the holidays. His happy ending wouldn’t have been possible without the many generous volunteers from KCHA and Many Paws Transport. His family thanks everyone involved for making their biggest Christmas wish come true.
Watch the heartwarming video of Zeus’s reunion below.

This website uses cookies to improve your experience while you navigate through the website. Out of these, the cookies that are categorized as necessary are stored on your browser as they are essential for the working of basic functionalities of the website. We also use third-party cookies that help us analyze and understand how you use this website. These cookies will be stored in your browser only with your consent. You also have the option to opt-out of these cookies. But opting out of some of these cookies may affect your browsing experience.
Necessary Always Enabled
Necessary cookies are absolutely essential for the website to function properly. These cookies ensure basic functionalities and security features of the website, anonymously.
Functional
Functional cookies help to perform certain functionalities like sharing the content of the website on social media platforms, collect feedbacks, and other third-party features.
Performance
Performance cookies are used to understand and analyze the key performance indexes of the website which helps in delivering a better user experience for the visitors.
Analytics
Analytical cookies are used to understand how visitors interact with the website. These cookies help provide information on metrics the number of visitors, bounce rate, traffic source, etc.
Advertisement
Advertisement cookies are used to provide visitors with relevant ads and marketing campaigns. These cookies track visitors across websites and collect information to provide customized ads.
Others
Other uncategorized cookies are those that are being analyzed and have not been classified into a category as yet.
SAVE & ACCEPT
Home » Volunteers Help Stolen Dog Travel 2,000 Miles To Make It Home For The Holidays