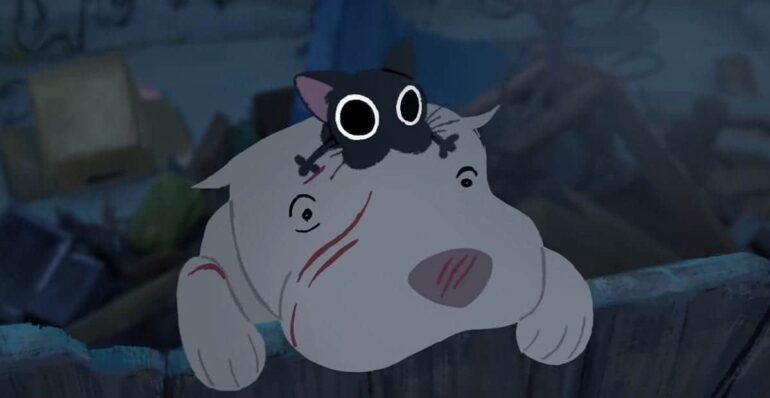 Pixar has done it again.

They’re responsible for our favorite animated films, and we’re ready to add their short film, “Kitbull” to that esteemed list. The tear-jerking production is part of Pixar’s new SparkShorts program. Pixar introduced the program to “discover new storytellers, explore new storytelling techniques, and experiment with new production workflows.” “Kitbull” is only 9 minutes long, but Pixar managed to make us feel everything from heartbreak to happiness in these few short scenes.

The story is about a fiercely independent, yet vulnerable, stray kitten who ends up meeting a pit bull. Chained outside and obviously abused, the poor pup is desperate for a friend. Director Rosana Sullivan said in a companion video,

“To be fully honest, it started from a cat video. I loved watching cat videos in times of stress. At first, I just wanted to draw something that made me feel good and was fun, but it evolved into something more personal to me eventually.”

“Kitbull” shows how an unlikely friendship can evolve and create something truly heartwarming. The short film takes two vulnerable characters through experiences that everyone watching can relate to. It’s about kindness and friendship, and it also touches on the serious issue of how society treats animals.  We won’t give any spoilers, but you’ll definitely want to watch this short film all the way to the end.

It doesn’t matter if you have a rescue pet in your house or not, this Pixar short film is sure to pull at your heartstrings. The film has started a conversation about breed stereotypes, animal abuse, and animal rescue. It’s also a testament to the power of friendship and what can happen if you step out of your comfort zone and embrace kindness. You’ll want to pull your pets in close after this one.

This website uses cookies to improve your experience while you navigate through the website. Out of these, the cookies that are categorized as necessary are stored on your browser as they are essential for the working of basic functionalities of the website. We also use third-party cookies that help us analyze and understand how you use this website. These cookies will be stored in your browser only with your consent. You also have the option to opt-out of these cookies. But opting out of some of these cookies may affect your browsing experience.
Necessary Always Enabled
Necessary cookies are absolutely essential for the website to function properly. These cookies ensure basic functionalities and security features of the website, anonymously.
Functional
Functional cookies help to perform certain functionalities like sharing the content of the website on social media platforms, collect feedbacks, and other third-party features.
Performance
Performance cookies are used to understand and analyze the key performance indexes of the website which helps in delivering a better user experience for the visitors.
Analytics
Analytical cookies are used to understand how visitors interact with the website. These cookies help provide information on metrics the number of visitors, bounce rate, traffic source, etc.
Advertisement
Advertisement cookies are used to provide visitors with relevant ads and marketing campaigns. These cookies track visitors across websites and collect information to provide customized ads.
Others
Other uncategorized cookies are those that are being analyzed and have not been classified into a category as yet.
SAVE & ACCEPT
Home » Pixar’s Short Film About An Abused Dog And A Stray Cat Pulls At All The Heartstrings