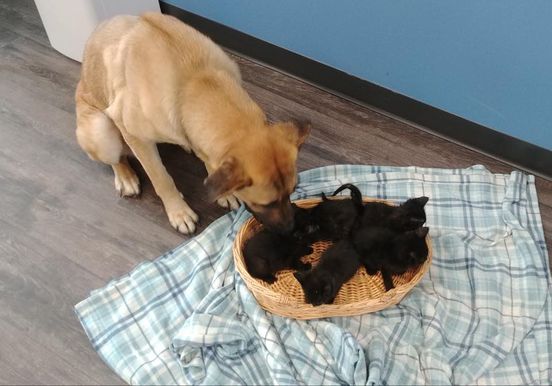 Animal shelters see a lot of heartbreak in their work, but this story comes with a happy ending.
Winter is always a dangerous time for any animal that finds itself outside without a home. That’s especially true for animals in Ontario where cold weather can kill. So when a Good Samaritan spotted a shivering dog on the side of a snowy road, they had to do something. They approached the dog hoping to help, and they learned the sad stray wasn’t alone. She was curled up around five kittens trying to keep them warm.

There’s no way to know how long the unlikely family had been out in the snow. We don’t even know if they knew each other before that night or if the dog found them all on her own. Either way, it was clear that the stray dog was trying her best to protect the helpless kittens.
Unwilling to leave them in the cold, the surprised Good Samaritan gathered all the kittens and the dog into their car. The Pet and Wildlife Rescue shelter in Chatham, Ontario took them in, and rescuers could hardly believe their story. The dog could have found a warmer, safer place to spend the night, but she refused to leave the kittens. A shelter spokesperson told The Dodo,

“It’s truly heartwarming. It had been a very cold night so these kittens would have had a very hard time surviving.”

The caring dog kept the kittens alive out in the snow, and she wasn’t willing to give them up once they were safe inside. It was clear to shelter workers that the dog had formed a special bond with the kittens she saved.  Now safe at the shelter, she’s kept up her role of  kitten caretaker.  She visits the liter regularly and looks over them like a proud mother.
Besides fleas and worms, the kittens and their adopted mama were all in good health. The shelter hopes someone will recognize them and take them home. But if not, the family will be put up for adoption.

This website uses cookies to improve your experience while you navigate through the website. Out of these, the cookies that are categorized as necessary are stored on your browser as they are essential for the working of basic functionalities of the website. We also use third-party cookies that help us analyze and understand how you use this website. These cookies will be stored in your browser only with your consent. You also have the option to opt-out of these cookies. But opting out of some of these cookies may affect your browsing experience.
Necessary Always Enabled
Necessary cookies are absolutely essential for the website to function properly. These cookies ensure basic functionalities and security features of the website, anonymously.
Functional
Functional cookies help to perform certain functionalities like sharing the content of the website on social media platforms, collect feedbacks, and other third-party features.
Performance
Performance cookies are used to understand and analyze the key performance indexes of the website which helps in delivering a better user experience for the visitors.
Analytics
Analytical cookies are used to understand how visitors interact with the website. These cookies help provide information on metrics the number of visitors, bounce rate, traffic source, etc.
Advertisement
Advertisement cookies are used to provide visitors with relevant ads and marketing campaigns. These cookies track visitors across websites and collect information to provide customized ads.
Others
Other uncategorized cookies are those that are being analyzed and have not been classified into a category as yet.
SAVE & ACCEPT
Home » Stray Dog Saves Orphaned Kittens From Freezing, And Now She’s One Proud Mom