Home » Meet Taylor: A Dog Working To Save Koalas In Australia

Meet Taylor: A Dog Working To Save Koalas In Australia 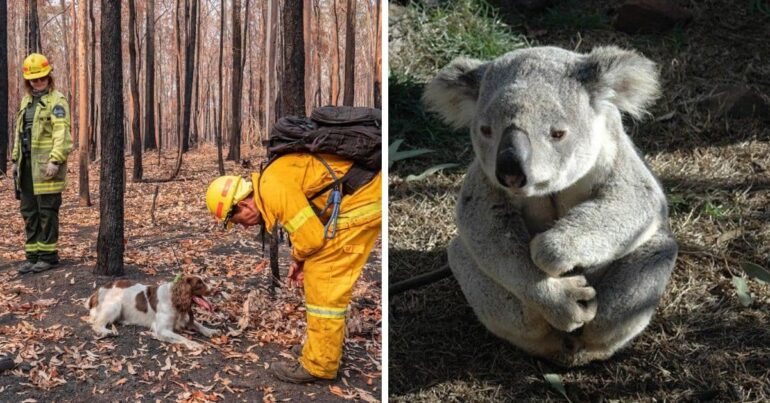 As the world mourns millions of animals that have lost their lives in Australian wildfires, dogs are playing an important role in wildlife conservation. One of those dogs is a four-year-old English Springer Spaniel named Taylor. She’s part of the effort to save koalas and other animal species unique to Australia.
For three years, Taylor has worked alongside professional dog trainer Ryan Tate as a wildlife detection dog. She is trained to sniff out a long list of animals including koalas, foxes, cats, rats, and rabbits. Her work has taken her up and down the eastern coast of Australia.

Taylor’s role in wildlife conservation has never been more important.

Reports indicate that fires have destroyed one third of the koala’s habitat.

Flames have devastated the koala population in a horrific way. It’s believed that 33% of the world’s koalas have already died in the wildfires. The fires are weeks away from being extinguished, and there’s no way to know how many more animals will suffer due to burned habitats, smoke inhalation, and lack of food.
Taylor has the important task of finding these animal in distress. Once she locates an animal, wildlife professionals determine if they need medical attention or need to be moved to a safer area. She is trained to detect koala fur and droppings and to point upward so wildlife experts can safely locate the animals hidden in the trees.
Her nose is powerful enough to detect an injured koala from 125 meters away.

Watch a video about Taylor below.

Tate explains that when the air is still, a koala’s scent descends from the treetops to the ground where Taylor can pick it up. And if there’s wind, Taylor finds fresh droppings to let conservationists know that there are koalas somewhere nearby.
In her three-year career, Taylor has located 50 koalas and thousands of koala droppings. She is also personally responsible for saving eight koalas (including one joey) from the ongoing wildfires. Conservationists transported some of those animals to a koala hospital.
As Taylor works diligently on the job, one of her current missions is to scour scorched bushland looking for any sign of life. Her ability to detect wildlife is a crucial part of Australia’s wildlife conservation efforts. She knows exactly what she needs to do to save lives.
If you’d like to help the animals and people affected by the Australian wildfires, click here.

This website uses cookies to improve your experience while you navigate through the website. Out of these, the cookies that are categorized as necessary are stored on your browser as they are essential for the working of basic functionalities of the website. We also use third-party cookies that help us analyze and understand how you use this website. These cookies will be stored in your browser only with your consent. You also have the option to opt-out of these cookies. But opting out of some of these cookies may affect your browsing experience.
Necessary Always Enabled
Necessary cookies are absolutely essential for the website to function properly. These cookies ensure basic functionalities and security features of the website, anonymously.
Functional
Functional cookies help to perform certain functionalities like sharing the content of the website on social media platforms, collect feedbacks, and other third-party features.
Performance
Performance cookies are used to understand and analyze the key performance indexes of the website which helps in delivering a better user experience for the visitors.
Analytics
Analytical cookies are used to understand how visitors interact with the website. These cookies help provide information on metrics the number of visitors, bounce rate, traffic source, etc.
Advertisement
Advertisement cookies are used to provide visitors with relevant ads and marketing campaigns. These cookies track visitors across websites and collect information to provide customized ads.
Others
Other uncategorized cookies are those that are being analyzed and have not been classified into a category as yet.
SAVE & ACCEPT
Home » Meet Taylor: A Dog Working To Save Koalas In Australia