Home » Dalmatian Sings While Playing Piano—But Only When No One Is Watching!

Dalmatian Sings While Playing Piano—But Only When No One Is Watching! 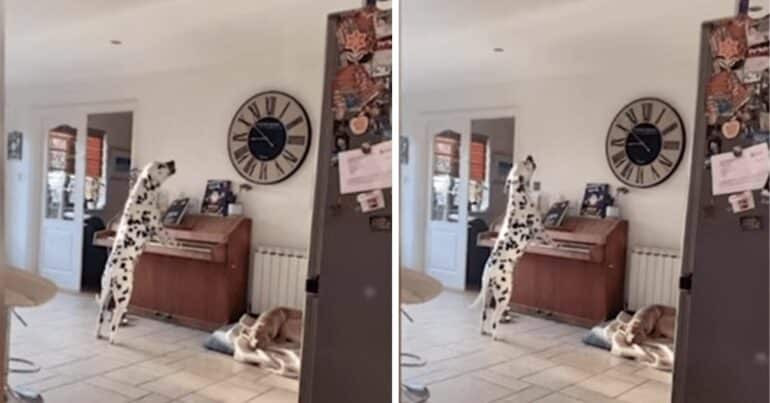 Esther and Rob Mason have always known their 2-year-old Dalmatian named Dexter is a star. And thanks to some sneaky recording, the rest of the world now agrees with them. The charming dog’s secret talents have been exposed, and we can’t help but fall in love with his passion for making music.
Esther told Metro that her family got their piano when her daughter started learning how to play. They never expected their dog to end up being the most talented piano player in the family, but video evidence doesn’t lie.
The video Esther recently shared shows Dexter standing on his two back legs while hitting the piano keys with his front paws. He enthusiastically plays different notes, but the best part is that he can’t help but sing along. He barks and howls along with his original song, and as Esther puts it, “You can tell he’s really passionate about it.”

The Mason family first realized Dexter had musical talents when they woke up one night to someone playing the piano. They were confused at first, but their questions were answered when they snuck into the room. They saw Dexter, all on his own, lost in his song. They have no idea what inspired their dog to start up this musical hobby, but Esther thinks it might have something to do with the Cats musical soundtrack she likes so much.
Dexter has been playing the piano for a while, but getting to see him in action is a rare treat. His family says he only plays and sings when he’s alone. As soon as someone enters the room, he gets stage fright and has to stop. It could also be that has a short attention span, but who knows.
What we do know is that Dexter is one special pup.

This website uses cookies to improve your experience while you navigate through the website. Out of these, the cookies that are categorized as necessary are stored on your browser as they are essential for the working of basic functionalities of the website. We also use third-party cookies that help us analyze and understand how you use this website. These cookies will be stored in your browser only with your consent. You also have the option to opt-out of these cookies. But opting out of some of these cookies may affect your browsing experience.
Necessary Always Enabled
Necessary cookies are absolutely essential for the website to function properly. These cookies ensure basic functionalities and security features of the website, anonymously.
Functional
Functional cookies help to perform certain functionalities like sharing the content of the website on social media platforms, collect feedbacks, and other third-party features.
Performance
Performance cookies are used to understand and analyze the key performance indexes of the website which helps in delivering a better user experience for the visitors.
Analytics
Analytical cookies are used to understand how visitors interact with the website. These cookies help provide information on metrics the number of visitors, bounce rate, traffic source, etc.
Advertisement
Advertisement cookies are used to provide visitors with relevant ads and marketing campaigns. These cookies track visitors across websites and collect information to provide customized ads.
Others
Other uncategorized cookies are those that are being analyzed and have not been classified into a category as yet.
SAVE & ACCEPT
Home » Dalmatian Sings While Playing Piano—But Only When No One Is Watching!