Home » Canine 411: All About The French Bulldog

Canine 411: All About The French Bulldog 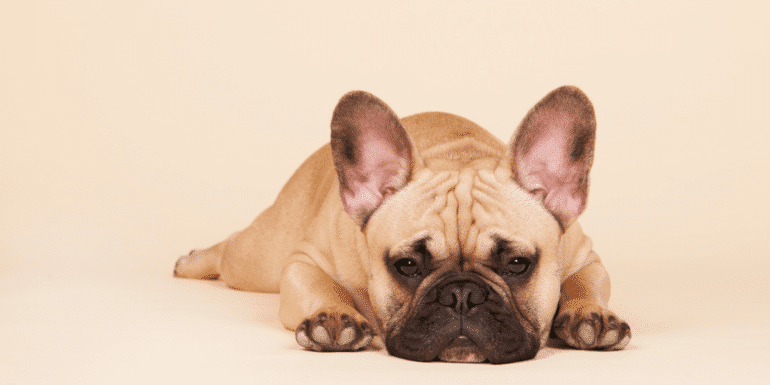 If we had to choose the most fashionable dog breed, it would be the French Bulldog. It’s quite possible that the entire world is obsessed with Frenchies. Just one stroll down the street in any city and you’ll probably run into at least one French Bulldog. We wouldn’t be surprised if you are a Frenchie owner yourself!
We can’t blame you – this breed is truly one of a kind. With all the love for Frenchies, we wanted to dive into all the fun facts about them. They are super fascinating pups. 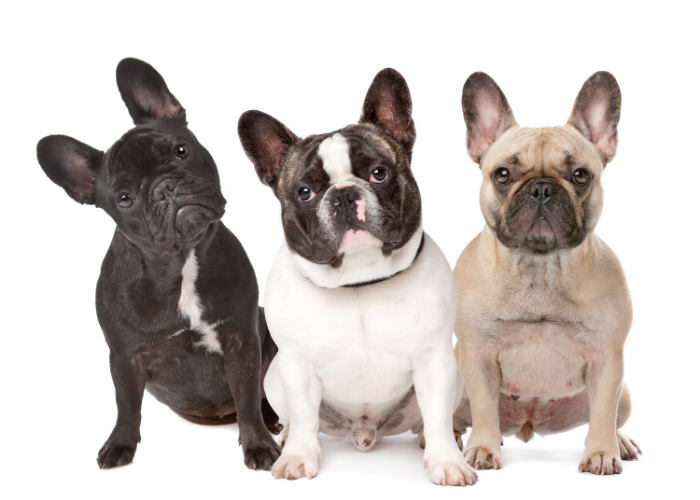 Let’s learn some cool facts about the French Bulldog!

Yup – the name of this breed is misleading everyone! French bulldogs are in fact from England. More precisely, they originated in Nottingham. Frenchies are directly related to British bulldogs.
The French are the ones responsible for breeding French bulldogs to be much smaller in size (compared to their British bulldog ancestors.) History also tells us that they were the main companions of French prostitutes, who were reportedly the ones who named them!
The ironic part is – the French bulldogs’ size made them very attractive to the British. So, the new breed soon returned to its origins, as a very popular English lap dog. 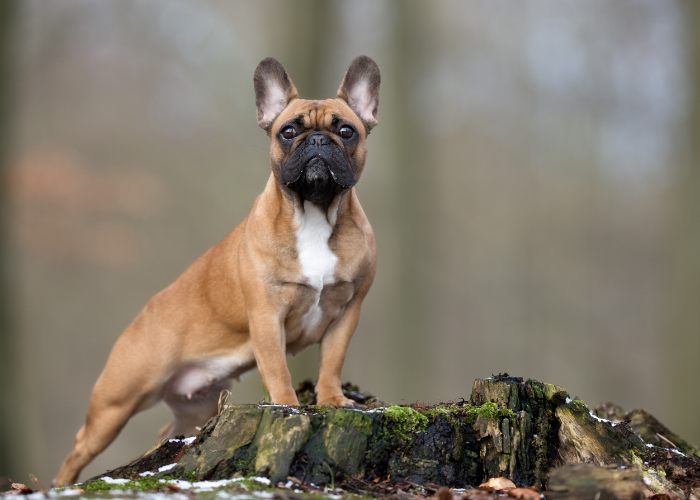 According to AKC, they are the 2nd Most Popular Breed

Back in 2015, Frenchies were the AKC’s 11th most popular breed. Six years later, they’ve managed to move up 9 spots to become the 2nd most popular breed!
We aren’t surprised – these pups are ridiculously cute and have a lot of pretty awesome qualities. Let’s see if they take first place next year…

You would assume that any dog can swim. But, not French Bulldogs – due to their body shape, swimming is a very difficult task.
French bulldogs have something called brachycephaly syndrome, which means they have shorter snouts and flatter faces than other breeds. While this syndrome contributes to a Frenchies charm, it, unfortunately, causes breathing issues. Their brachycephaly also makes it much more difficult to keep their heads about water, making swimming dangerous.

They are one of the Most Family-Friendly Dogs

French bulldogs love children! That’s probably one of the main reasons this breed continues to be so popular. No matter if it’s a toddler or teenager, Frenchies get along wonderfully with kids.
Why? Frenchies have a great temperament compared to many other breeds. Even when kids get rowdy, French Bulldogs typically stay calm and gentle. Frenchies are also pretty small in size, making them a friendly breed for younger kids too. 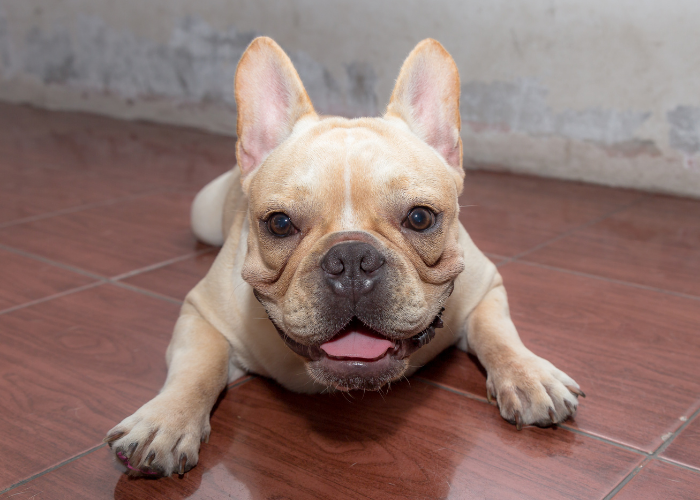 They are Very Chatty

While Frenchies may not be barkers, they definitely love to talk. They are adored for all the little noises they tend to make. They express themselves with all kinds of sounds, from snorting to whining. Many owners believe their Frenchies basically speak their own language.
French Bulldogs definitely use sounds to get exactly what they want, whether it’s a treat or cuddles. Who wouldn’t give it to them? It’s hard to resist a Frenchie’s sweet eyes!

What You Need To Know About Mange In Dogs, Including How To Treat It

French bulldogs make other kinds of noises, too…  You may hear many French bulldog owners complaining about their pup’s farts. That’s because they are small and very susceptible to stomach issues. This includes flatulence.
According to many owners, Frenchie farts can be pretty stinky. The smells can thankfully be controlled by a good diet and exercise. 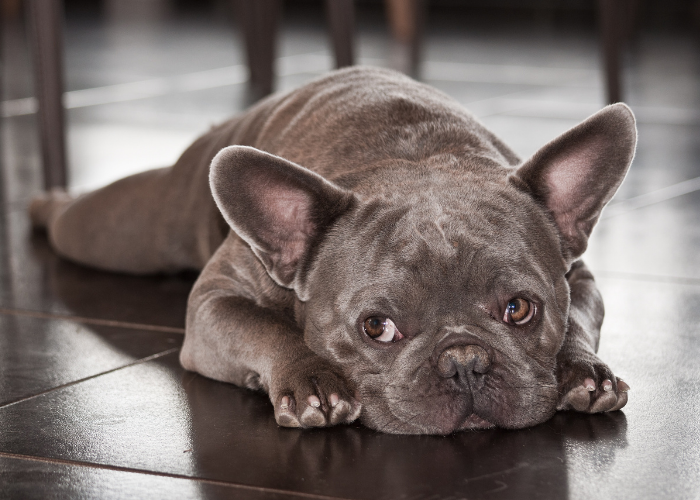 Their Ears Come in Not One, But Two Shapes!

The first French bulldogs did not have the ‘bat’ ears that we know them for today. In fact, Frenchies originally had ‘rose’ ears. These are the type English bulldogs have – where the ears fold down, sort of like a rose petal.
So, how did the French bulldog’s ears change? As the breed gained more popularity, American breeders saw ‘bat’ ears to be more unique than the ‘rose’ ears. This stuck as the standard for the breed, so much so that this ear type is now part of the American Kennel Club’s standard for French bulldogs.
Whether you’re a Frenchie owner or not, we hope you discovered something new about this unique breed. Don’t forget to share this article with other French Bulldog lovers – they will absolutely adore any of these Frenchie facts! 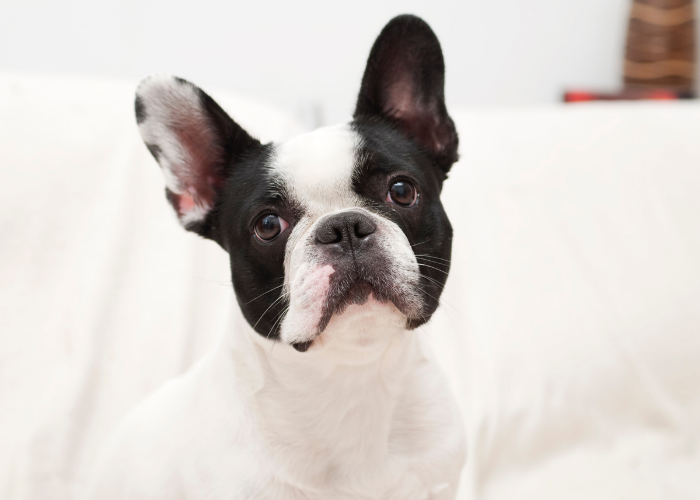 This website uses cookies to improve your experience while you navigate through the website. Out of these, the cookies that are categorized as necessary are stored on your browser as they are essential for the working of basic functionalities of the website. We also use third-party cookies that help us analyze and understand how you use this website. These cookies will be stored in your browser only with your consent. You also have the option to opt-out of these cookies. But opting out of some of these cookies may affect your browsing experience.
Necessary Always Enabled
Necessary cookies are absolutely essential for the website to function properly. These cookies ensure basic functionalities and security features of the website, anonymously.
Functional
Functional cookies help to perform certain functionalities like sharing the content of the website on social media platforms, collect feedbacks, and other third-party features.
Performance
Performance cookies are used to understand and analyze the key performance indexes of the website which helps in delivering a better user experience for the visitors.
Analytics
Analytical cookies are used to understand how visitors interact with the website. These cookies help provide information on metrics the number of visitors, bounce rate, traffic source, etc.
Advertisement
Advertisement cookies are used to provide visitors with relevant ads and marketing campaigns. These cookies track visitors across websites and collect information to provide customized ads.
Others
Other uncategorized cookies are those that are being analyzed and have not been classified into a category as yet.
SAVE & ACCEPT
Home » Canine 411: All About The French Bulldog