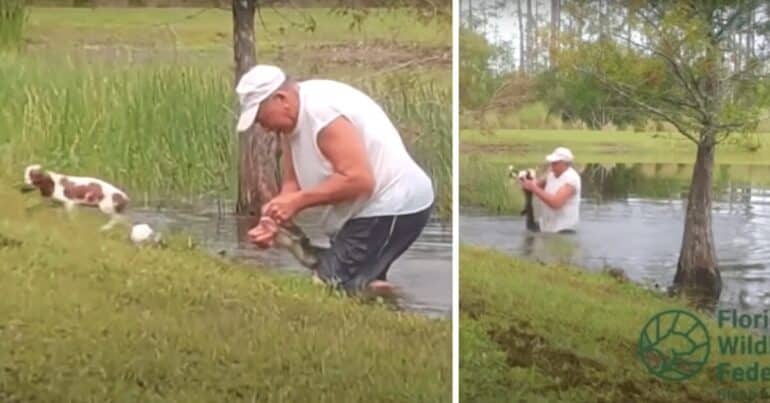 When it came to saving his dog’s life, 74-year-old Richard Wilbanks didn’t hesitate. His three-month-old Cavalier King Charles Spaniel named Gunner was trapped between the jaws of an alligator, but the puppy is now alive and safe thanks to his dad’s fast and fearless actions. The Florida man says the attack happened quickly, and his story is now a cautionary tale for every pet owner out there.
Wilbanks and his wife fell in love with Florida wildlife as soon as they moved to the area four years ago. They chose their house on the privacy of a dead-end street partly because of its proximity to a natural environment. Wilbanks has seen all kinds of animals including deer, turkey, and bobcats, and he’s always known that the nearby pond is the perfect environment for alligators. That knowledge, however, didn’t prepare him for how sneaky and fast those alligators can really be.

Gunner and his devoted dad were out walking near the pond when the attack happened. Wilbanks said he had no idea the gator was there until it already had the puppy between its teeth. The four-foot gator sprang about three feet out of the water to grab Gunner.
Without thinking, Wilbanks jumped into the water, his cigar still in his mouth, and grabbed the gator by the jaws. With a lot of effort and muscle, he managed to pry the teeth far enough apart to allow Gunner to wiggle out and make it to shore. With the puppy safe, Wilbanks then had to extract his own hands from the alligator’s mouth.
By the time the pair made it back to their house, they were both shaken and bleeding. Wilbanks did a quick repair to his battered hands and then rushed Gunner to the emergency vet. Thankfully, the exam showed that while Gunner had a puncture wound and some water in his lungs, he had no internal injuries. He stayed at the vet for a few days to recover, but he’s now safely back at home.
The attack on Gunner and the heroic rescue were captured on video thanks to wildlife cameras that had been set up by Florida Wildlife Federation and the fstop Foundation. And while Wilbanks said he and Gunner will stay far away from the pond from now on, he doesn’t blame the gator. The gator in question is still out in the pond, and Wilbanks hopes he stays there. He respects the wildlife around him and hopes other people learn from his story.
h/t: USA Today

This website uses cookies to improve your experience while you navigate through the website. Out of these, the cookies that are categorized as necessary are stored on your browser as they are essential for the working of basic functionalities of the website. We also use third-party cookies that help us analyze and understand how you use this website. These cookies will be stored in your browser only with your consent. You also have the option to opt-out of these cookies. But opting out of some of these cookies may affect your browsing experience.
Necessary Always Enabled
Necessary cookies are absolutely essential for the website to function properly. These cookies ensure basic functionalities and security features of the website, anonymously.
Functional
Functional cookies help to perform certain functionalities like sharing the content of the website on social media platforms, collect feedbacks, and other third-party features.
Performance
Performance cookies are used to understand and analyze the key performance indexes of the website which helps in delivering a better user experience for the visitors.
Analytics
Analytical cookies are used to understand how visitors interact with the website. These cookies help provide information on metrics the number of visitors, bounce rate, traffic source, etc.
Advertisement
Advertisement cookies are used to provide visitors with relevant ads and marketing campaigns. These cookies track visitors across websites and collect information to provide customized ads.
Others
Other uncategorized cookies are those that are being analyzed and have not been classified into a category as yet.
SAVE & ACCEPT
Home » Florida Man Wrestles Alligator To Save Puppy