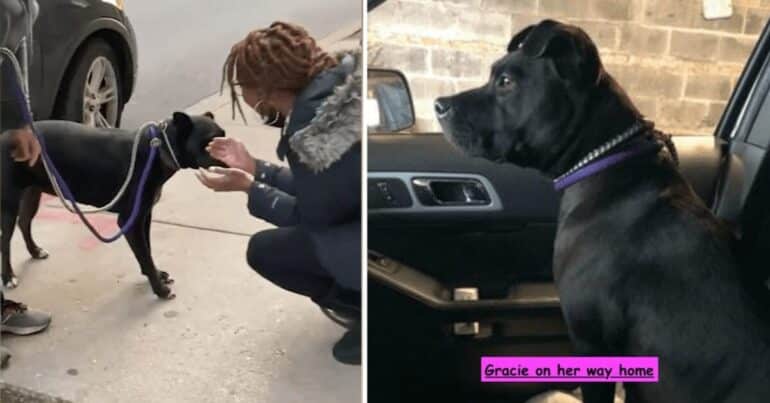 Two weeks before Christmas 2019, Kelly Shade’s dog, Gracie, darted out an open door. The friendly pit bull disappeared down the street, and her family did everything they could to bring her back. They were devastated by the loss, but they never gave up hope. Eleven months passed with no sign of their dog, but all that hope paid off just in time for the 2020 holidays.
When Gracie first went missing, Kelly and her family did all the right things to bring her back. They searched their neighborhood, made signs, contacted shelters, and posted to Lost Dog Illinois. Despite their efforts, they were forced to spend Christmas without an important member of their family.

The 2019 holidays came and went, and Kelly knew the chances of finding Gracie diminished with each week. What she didn’t know, however, was that her beloved dog wasn’t that far away. Over the summer, neighbors from only two miles away spotted a beautiful, but scared, dog. The dog was hanging out in the neighborhood, but she was too nervous to let people get too close.
The neighbors didn’t know it was Gracie, but fellow pet owner and animal lover Polly Ellison was determined to help. She saw Gracie on multiple occasions, and she decided to gain her trust. Polly spent months leaving food for Gracie and slowly trying to get closer and closer. Gracie remained timid, but she started to recognize Polly as someone who could help.
As the months passed and Gracie stayed in the area, Polly contacted another animal lover, Katie Campbell. Katie rescues stray dogs in her spare time, and together, the two women devised a routine and plan to bring Gracie in.
Thanks to their determination, compassion, and skill, their plan worked. Polly and Katie finally got their hands on Gracie on November 18. And they didn’t waste any time. That same day, they scanned Gracie for a microchip and were thrilled to see that she had one. They immediately contacted the phone number associated with the chip, and Kelly picked up the phone.
She told ABC News,
“I just started crying all over again.”

When Gracie and Kelly finally reunited, there was no sign of the scared dog that took months to catch. Instead, Gracie’s tail started wagging as soon as she saw her family. She was ecstatic to see those familiar faces, and their reunion is exactly what holiday miracles are made of.
Now that Gracie is finally home, her family is looking forward to spending the holidays all together. Kelly said Gracie has not left her side, and she is in surprisingly good health for living on her own for almost a year. Katie says,
“People need to realize the ability of a dog to survive and just never give up on them. That’s really the biggest thing you can teach people is never give up.”

This website uses cookies to improve your experience while you navigate through the website. Out of these, the cookies that are categorized as necessary are stored on your browser as they are essential for the working of basic functionalities of the website. We also use third-party cookies that help us analyze and understand how you use this website. These cookies will be stored in your browser only with your consent. You also have the option to opt-out of these cookies. But opting out of some of these cookies may affect your browsing experience.
Necessary Always Enabled
Necessary cookies are absolutely essential for the website to function properly. These cookies ensure basic functionalities and security features of the website, anonymously.
Functional
Functional cookies help to perform certain functionalities like sharing the content of the website on social media platforms, collect feedbacks, and other third-party features.
Performance
Performance cookies are used to understand and analyze the key performance indexes of the website which helps in delivering a better user experience for the visitors.
Analytics
Analytical cookies are used to understand how visitors interact with the website. These cookies help provide information on metrics the number of visitors, bounce rate, traffic source, etc.
Advertisement
Advertisement cookies are used to provide visitors with relevant ads and marketing campaigns. These cookies track visitors across websites and collect information to provide customized ads.
Others
Other uncategorized cookies are those that are being analyzed and have not been classified into a category as yet.
SAVE & ACCEPT
Home » Dog Lost For 11 Months Reunites With Family Just In Time For Holiday Season