Home » Canine 411: All About The Doberman Pinscher Dog Breed

Canine 411: All About The Doberman Pinscher Dog Breed 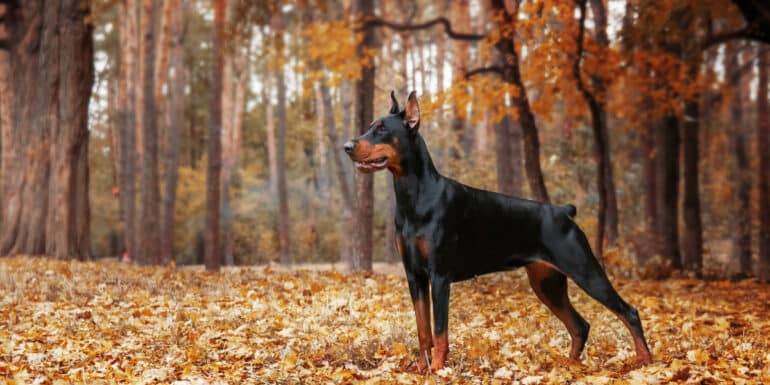 Big and burly, no one can miss a Doberman Pinscher. These large dogs have long been depicted as highly aggressive and scary guard dogs. But, don’t judge a Doberman by its cover – these dogs are quite kind, smart, and loving dogs. Let’s put all the stereotypes aside and learn all the facts about the Doberman Pinscher! 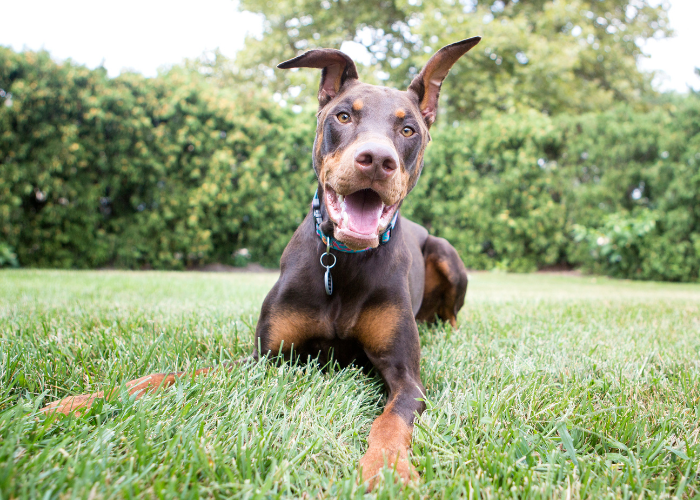 If a mixtape were a dog, it would be a Doberman

A Doberman didn’t result from a centuries-long evolution or random cross-breeding. The Doberman Pinscher was created by breeding multiple kinds of dogs. The types are still not known for certain. But, many believe that there’s at least a German Pinscher in there somewhere.
Why? Well, the Doberman is in fact a German dog. A tax collector by the name of Karl Frederick Louis Dobermann is the known mastermind who crossbred all different breeds to create the Doberman. Dobermann wanted to create the ideal guard dog. Clearly, he was very successful, which meant he should name the new dog breed after himself, of course!

These dogs have some major brains

What is remarkable about Dobermans is just how intelligent these dogs are. They are considered one of the top 10 smartest dog breeds, taking 5th place according to PetMd.
What makes Doberman’s so witty? Dobermans are very fearless and quick-witted dogs. They are always ready to learn something new, no matter how daunting the challenge. They will think strategically to figure it out and help their human companion with whatever problem lays in from of them. Sometimes, it can help that Dobermans are frankly very large, but these dogs know just how to use their size to achieve any goal! 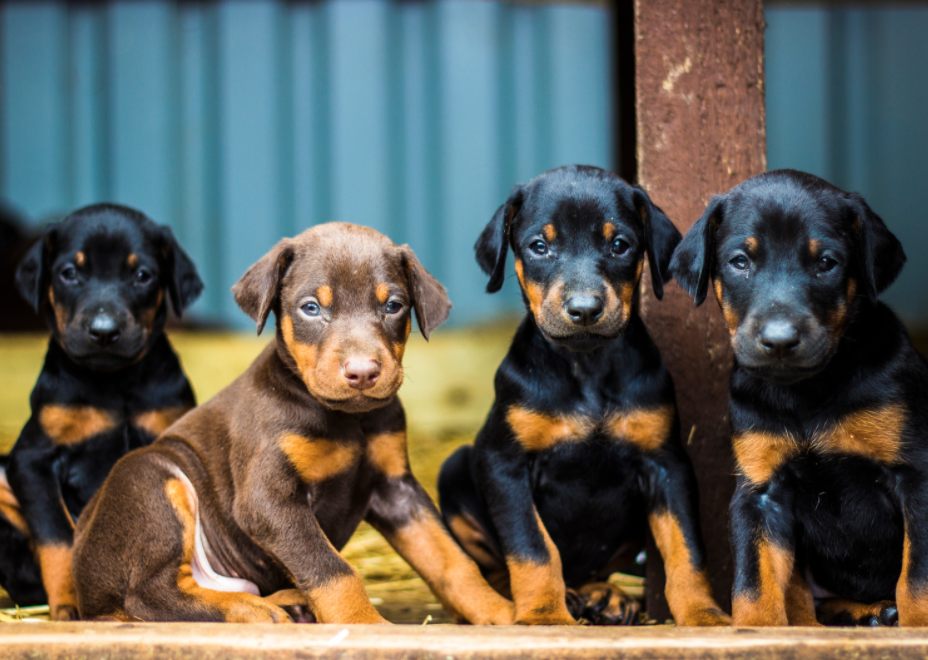 A Doberman can do any job

The intelligence of a Doberman makes them excellent at getting jobs done. This breed was created to perform a job, aka be a guard dog. Therefore, being reliable is basically in a Doberman’s genes!
Dobermans actually love to be trained.  Their incredible brains make them more interesting in learning.  In fact, Dobermans are part of the Working Group of dogs, as classified by the American Kennel Club. This category is for dogs who are naturally inclined to protect, assist, and rescue. It makes sense, as the Doberman is one of the original police and military dogs.

These dogs have a lot of love to give!

Yes, Dobermans are born guard dogs. But, that doesn’t mean they dislike humans and are aggressive all the time. Dobermans are very loyal and loving dogs, especially towards their owners. They adore being around humans, as long as they get to know them. Being that a Doberman is bred to protect, they always need to have a good sense of who they’re engaging with. After that, a Doberman is ready to give all the love and play outside for hours with you. 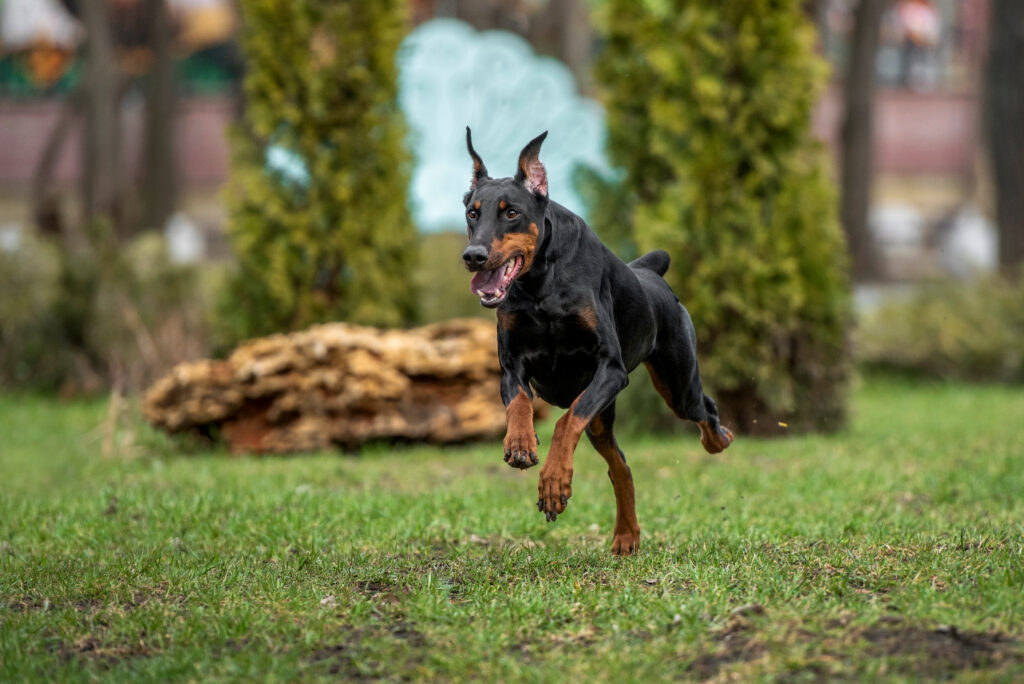 What makes Dobermans so majestic is their lean and strong bodies. These dogs were built for strength and speed. I mean, it’s not surprising that a guard dog can run super-fast – incredible speed is definitely a way to intimidate anybody!

Human Foods That Are Toxic To Dogs

The Doberman has naturally floppy ears

Many images of Dobermans show these pups with ears that stand upright. Yet, this isn’t the natural form of a Dobermans ear. This breed actually has ears that are floppy, similar to a Labrador Retriever.
Why Dobermans’ ears look differently has to do with something called ear-cropping. This practice started as a way to perfect a Doberman’s ability to be a guard dog. For instance, cropped ears typically have stronger hearing capabilities.
While being a guard dog might be a Doberman’s job, ear-cropping is an unethical practice. Modifying a dog’s ears when they are puppies can cause harm and potential disabilities. Still, ear cropping remains ‘part of the accepted standards’ for the American Kennel Club. 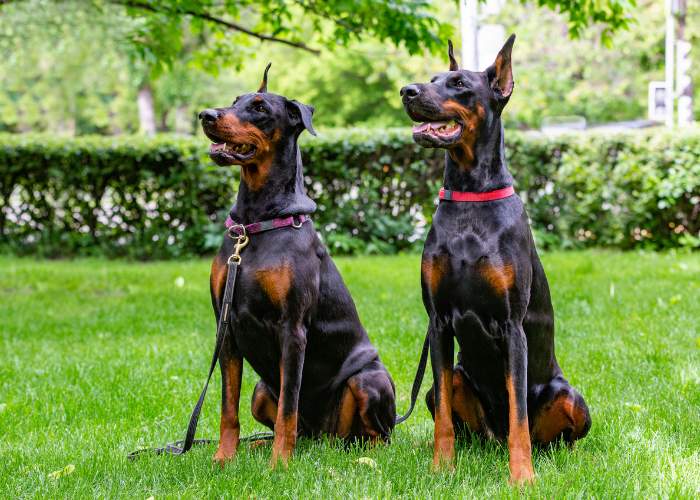 Like most breeds, Dobermans are susceptible to certain illnesses. Unfortunately, Dobermans have very sensitive hearts. This breed is known to develop congestive heart failure and, more commonly,  dilated cardiomyopathy. This genetic disorder is the most common in Dobermans. Dilated cardiomyopathy is one that does shorten their lifespans, although Dobermans can live a few more years after a diagnosis.
Doberman Pinschers may be natural guard dogs, but they are loyal lovers at heart. There are a ton of fascinating facts about the Doberman to learn and share with our other dog-loving friends. If you have or know a Doberman, we’d love to hear all your thoughts on this beautiful breed in the comments below!

This website uses cookies to improve your experience while you navigate through the website. Out of these, the cookies that are categorized as necessary are stored on your browser as they are essential for the working of basic functionalities of the website. We also use third-party cookies that help us analyze and understand how you use this website. These cookies will be stored in your browser only with your consent. You also have the option to opt-out of these cookies. But opting out of some of these cookies may affect your browsing experience.
Necessary Always Enabled
Necessary cookies are absolutely essential for the website to function properly. These cookies ensure basic functionalities and security features of the website, anonymously.
Functional
Functional cookies help to perform certain functionalities like sharing the content of the website on social media platforms, collect feedbacks, and other third-party features.
Performance
Performance cookies are used to understand and analyze the key performance indexes of the website which helps in delivering a better user experience for the visitors.
Analytics
Analytical cookies are used to understand how visitors interact with the website. These cookies help provide information on metrics the number of visitors, bounce rate, traffic source, etc.
Advertisement
Advertisement cookies are used to provide visitors with relevant ads and marketing campaigns. These cookies track visitors across websites and collect information to provide customized ads.
Others
Other uncategorized cookies are those that are being analyzed and have not been classified into a category as yet.
SAVE & ACCEPT
Home » Canine 411: All About The Doberman Pinscher Dog Breed