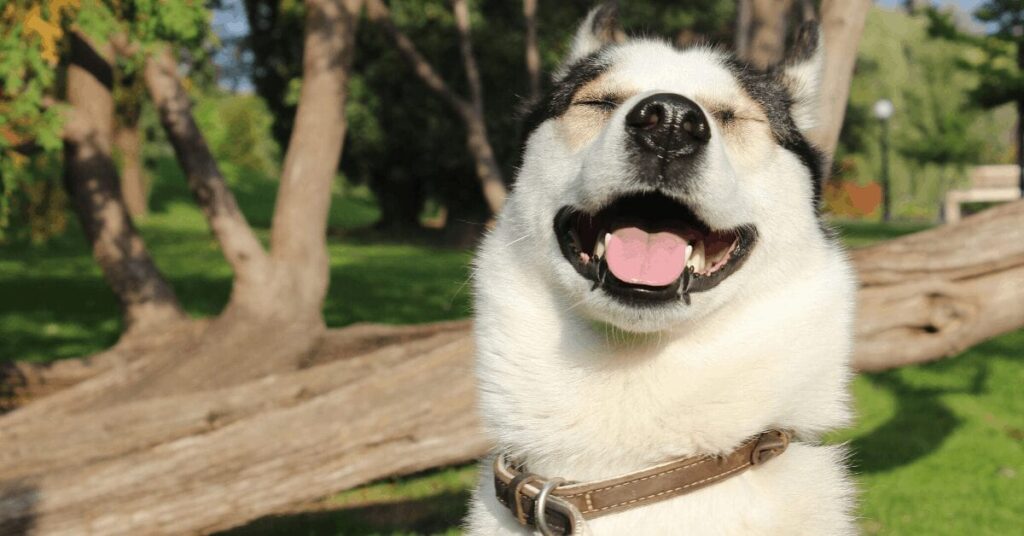 We all know dogs love a good belly rub and butt scratch. They lean into our pets like it’s the best thing in the world, and we do our best not to disappoint. But have you ever wondered if your dog is ticklish? Most humans have a love-hate relationship with being tickled. It can feel good and make us laugh, but after a while, it can also turn painful. Tickling has even been used throughout history as a form of torture.
So how do we know if our well-intentioned scratches aren’t actually tickles that our dogs don’t like? 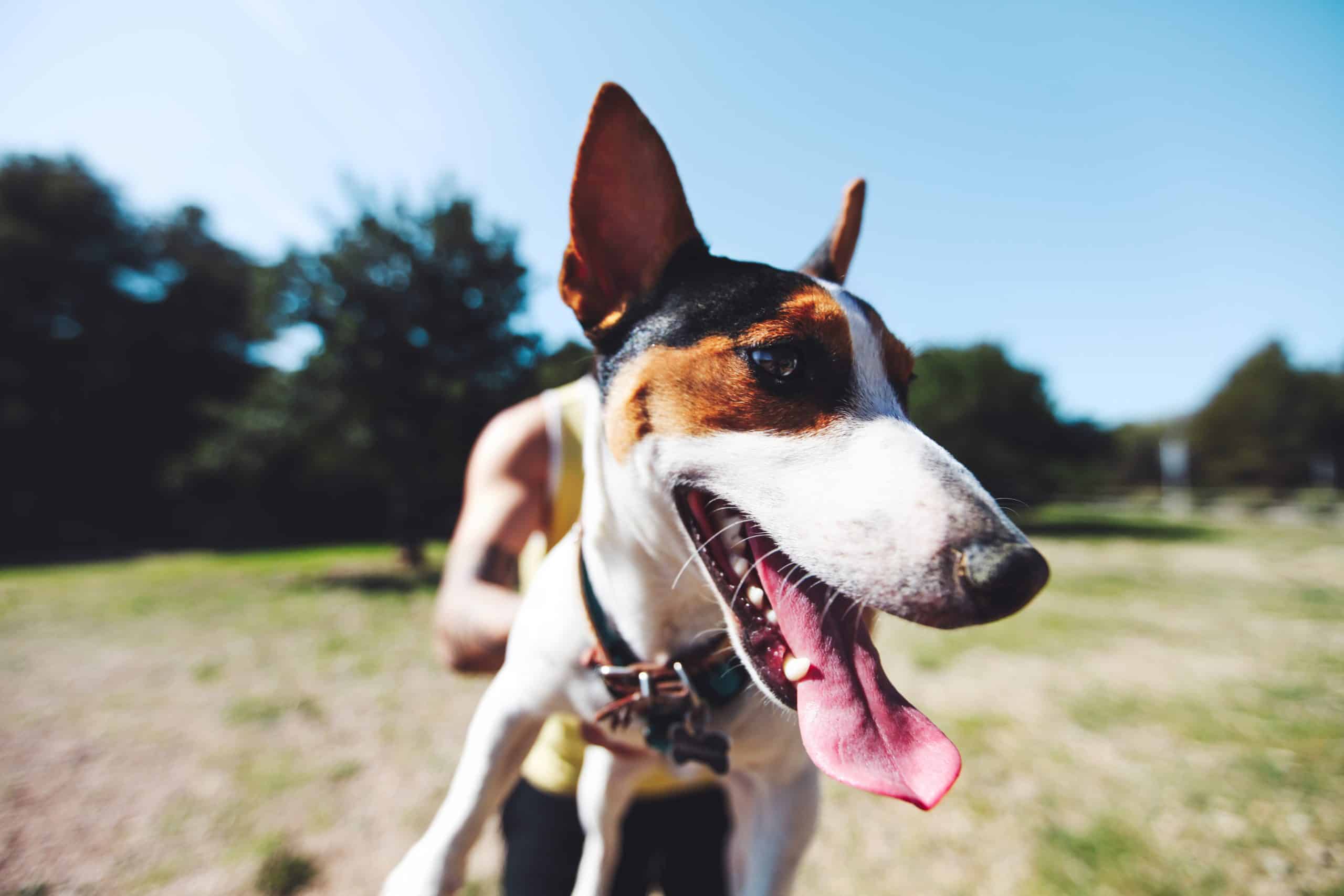 Before we can determine if dogs are ticklish, we have to decide what being ticklish actually means. Most people consider being ticklish to be having an involuntary reaction to a specific kind of touch. That reaction could be pleasurable or irritating.
Under this definition, it’s pretty clear that dogs can indeed be ticklish. They don’t burst out with laughter, but they do have an involuntary physical response.
Think about this…
Has your dog ever started kicking their leg while you’re giving them a belly rub? That leg twitch is called a scratch reflex. It happens when your touch sends a nerve impulse to your dog’s spinal cord. That impulse tells the leg to start kicking as a way to rid the body of an irritant.
Calling your belly rub an “irritant” doesn’t sound great, but that doesn’t mean your dog doesn’t like it. It’s just like when someone tickles your feet. Sometimes it feels good, and sometimes it doesn’t. 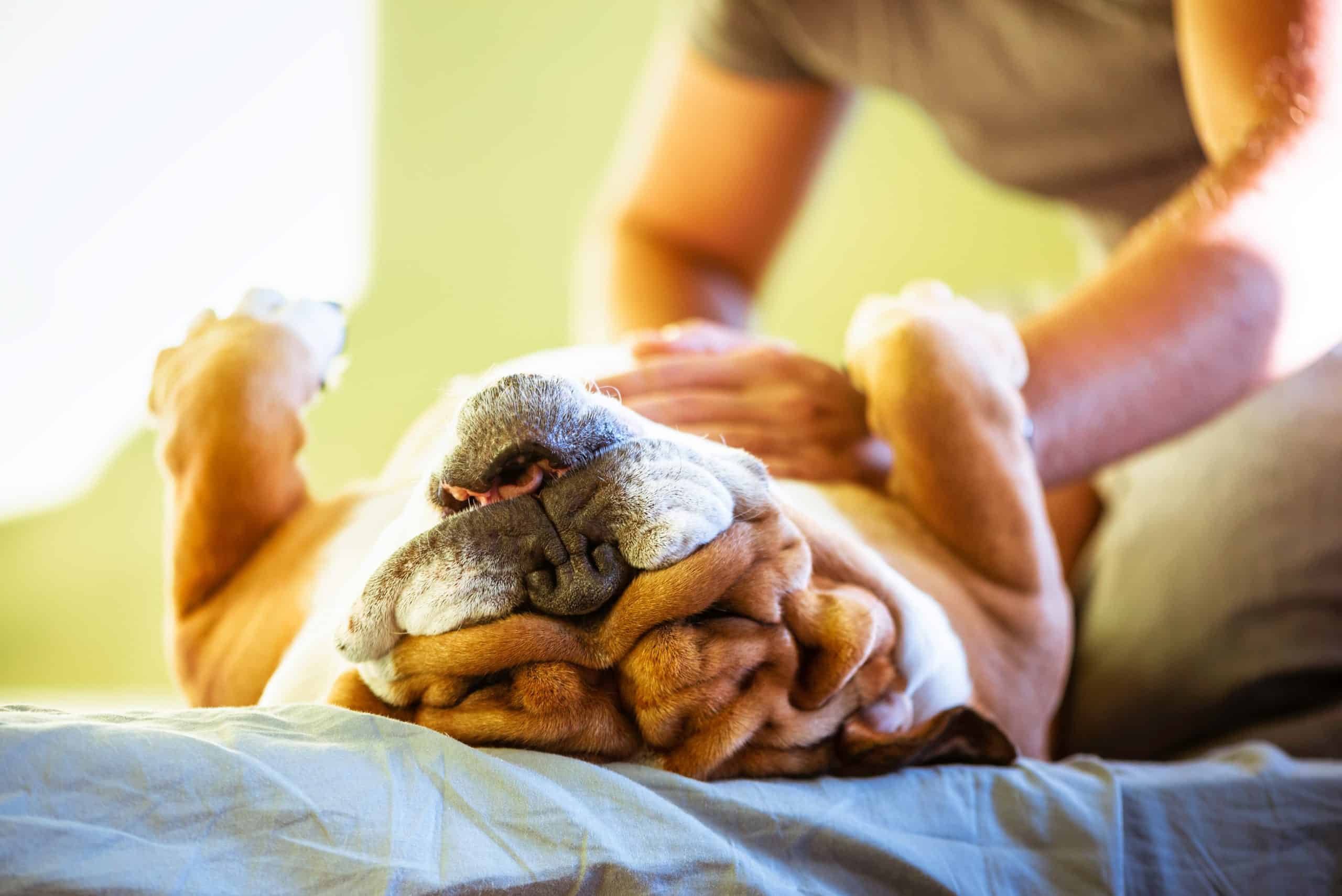 The Science of Tickling

Scientists have coined two different terms to refer to different kinds of tickles. There’s “knismesis” for light touches, and “gargalesis” for the laughter-inducing heavier tickles.
Knismesis most likely evolved as an animal’s way to protect themselves from harmful insects. Dogs do this by shaking or itching.  To test it for yourself, try lightly touching or blowing on the tips of your dog’s ears. When they twitch or shake their head, that’s knismesis.
Gargalesis has so far not been observed in dogs. This is the kind of intense tickling that has potential to turn into a full-blown tickle fight between humans. It’s associated with “social joy” and for an unknown reason elicits uncontrollable laughter.  Some people say their dogs make laughter-like sounds when they’re tickled in sensitive areas, but there’s no scientific evidence that shows dogs experience this form of tickling in the same way as humans. There are other animals (mostly primates), however, that have been observed tickling each other as a way of playing. 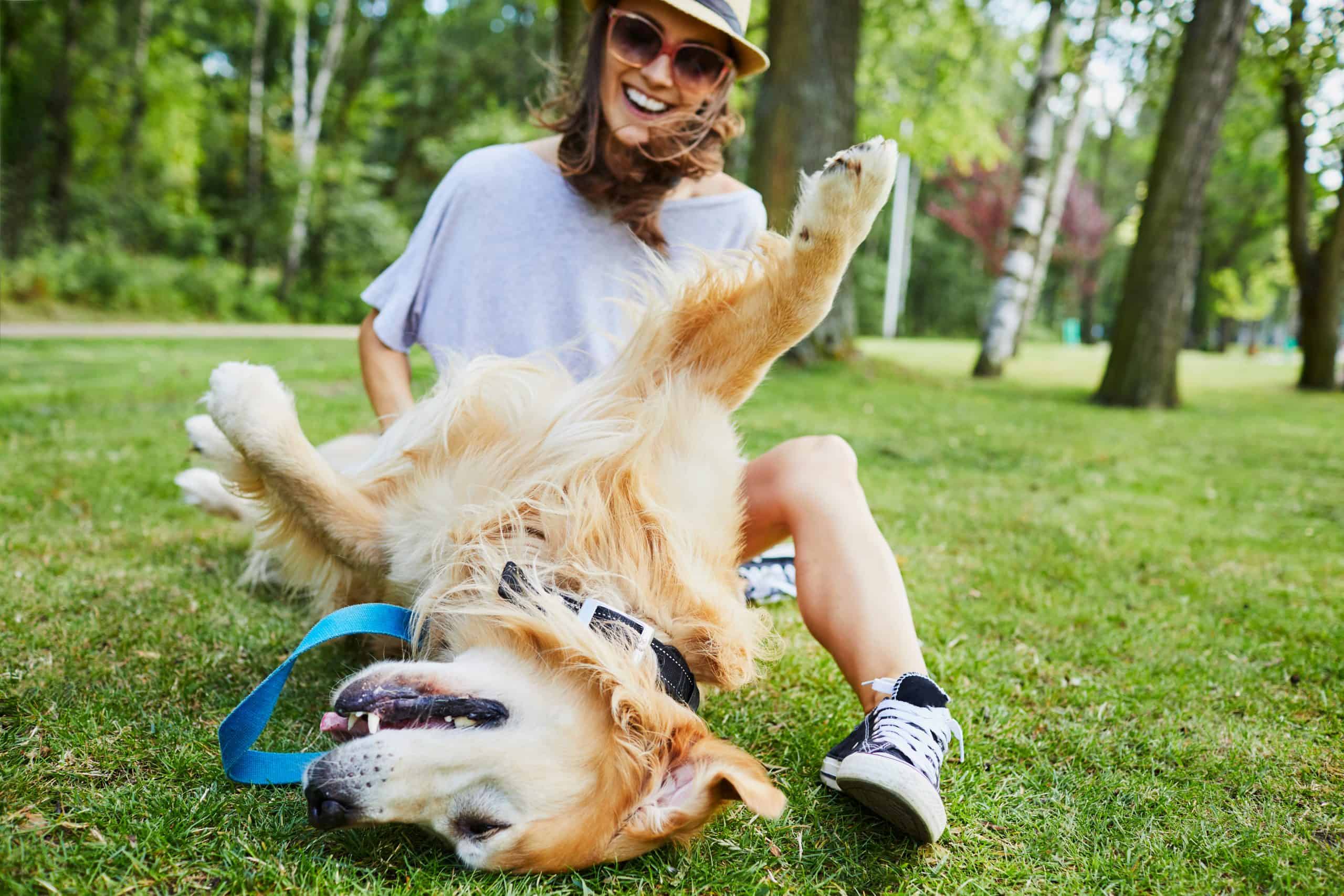 There’s some debate in the dog world about whether or not dogs can laugh, but the general consensus is that dogs don’t laugh in the way humans do. They don’t giggle at good jokes or chuckle when they’re having fun.
A study done in 2005, however, shows that dogs make a vocalization that is similar to human laughter. It sounds more like a pant or heavy breathing, but animal behaviorist Patricia Simonet theorizes it only happens during intense playtime, and it’s a dog’s way of laughing with joy.
Simonet says,

If you listen closely at a dog park, you might hear this “dog laugh” for yourself. But so far, there’s no evidence to show dogs make this sounds when they’re tickled–it’s strictly reserved for super fun playtime. 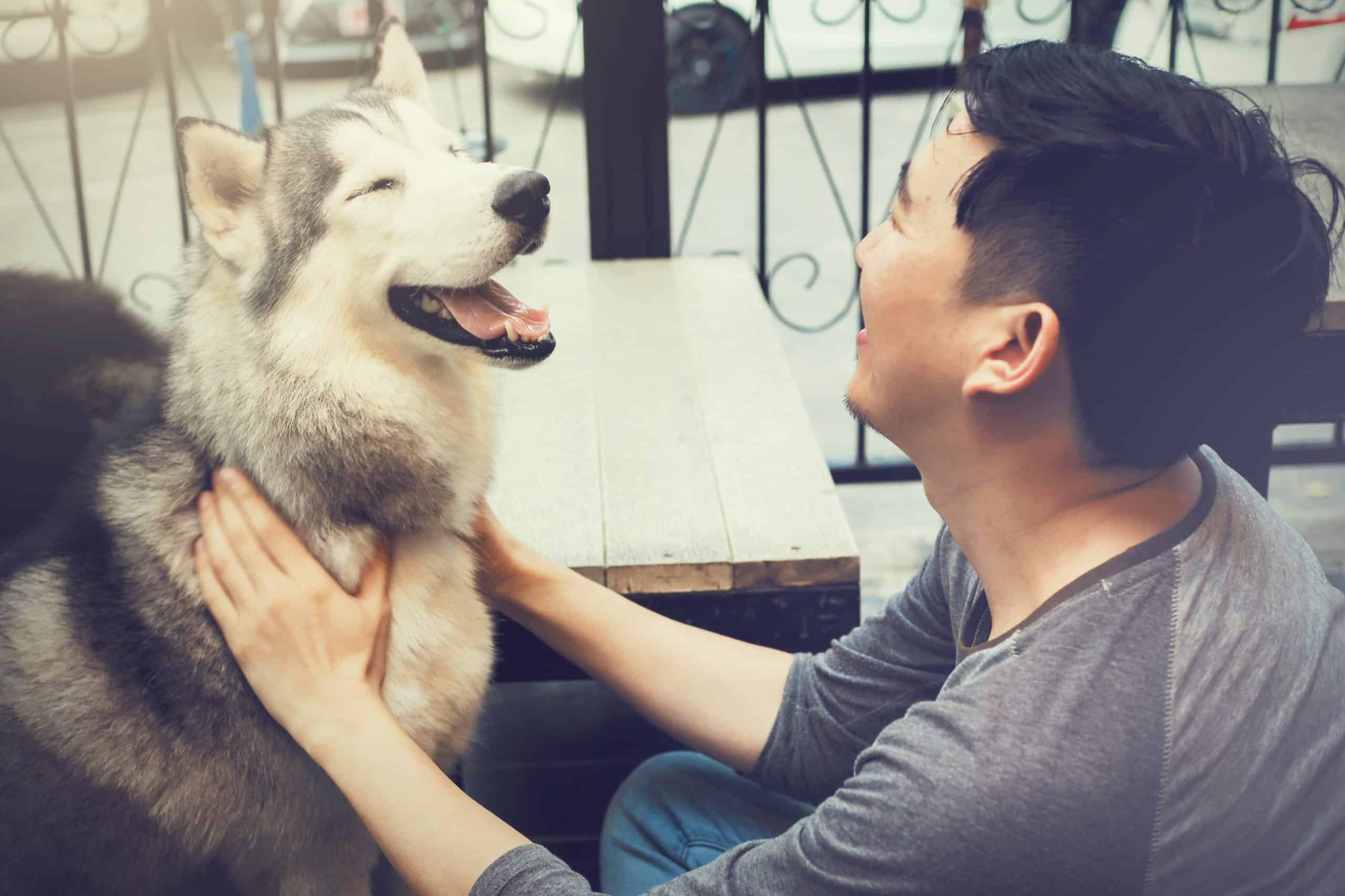 How To Tell If Your Dog Likes To Be Tickled

If you consider your dog’s scratch reflex or knesmesis response to be equivalent to tickling, you’ll want to know if your dog enjoys it.
Dogs are typically efficient communicators, even despite the fact they don’t speak our language. They use body language to convey their thoughts and feelings, and if you pay attention, it should be easy to tell whether or not your dog enjoys being “tickled.”
A lot of dogs roll onto their backs to give humans easy access to their bellies. If they’re voluntarily showing their most sensitive area, that’s a good sign they’re loving your rubs, pets, and tickles. They might also lean into your hand, give a nice big stretch, or “smile.”
If your dog gets annoyed or irritated with your touches, the signs are fairly obvious. Look for raised hair along their back, snarling, snapping, or general avoidance behaviors. If your dog is trying to move away from you, respect their boundaries and stop what you’re doing. You should also remember that some tickling starts off pleasurable, but it can become irritating or painful if it goes on for too long.
But for the dogs that enjoy scratches, don’t hold back! Being scratched, rubbed, or tickled can be a relaxing experience. It can also strengthen your bond.
Do you know why your dog stares at you? Find out here. 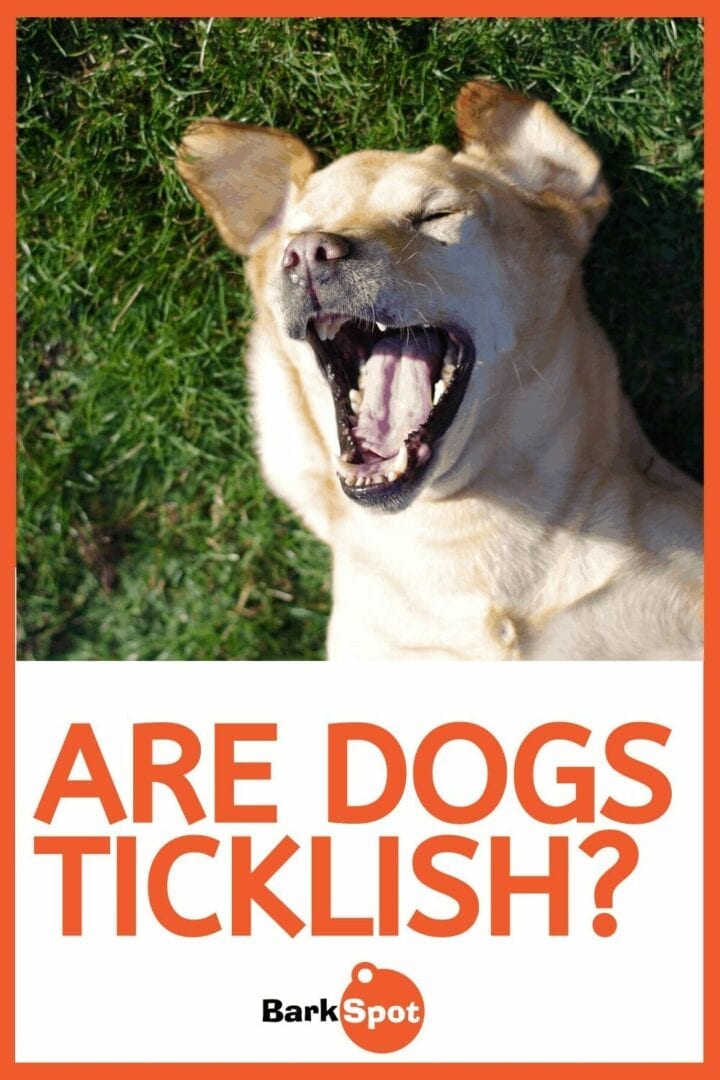 How Do Dogs Get Parvo?

Can Dogs Have Bell Peppers?

Why Do Dogs Get Car Sick?

Can Dogs Have Applesauce?