Why Do Dogs Love Peanut Butter? 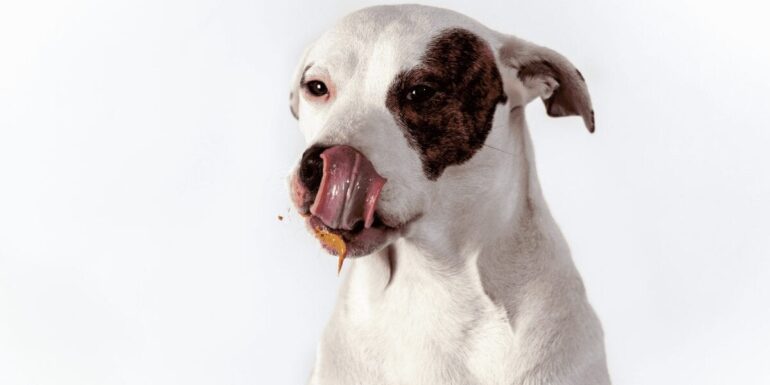 Does your dog love peanut butter? If so, they are not alone. Peanut butter seems to be the pumpkin spice latte of the canine world, almost universally adored. But why is this nutty spread so appealing to our canine companions, and is it healthy or harmful? Read on to find out. 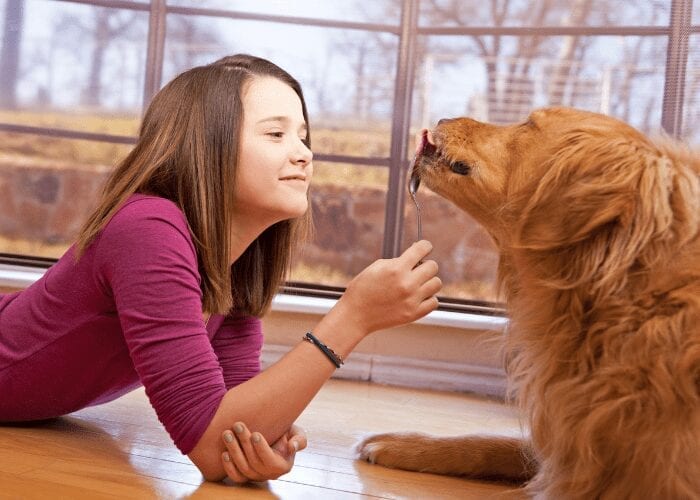 Dogs have a secret sweet tooth.

Unlike cats, dogs have the taste buds needed to appreciate the sweeter things in life, and sugar is no exception. Many common peanut butter brands contain added sugar in addition to its high levels of fat and sodium, making a spoon of peanut butter an extra indulgent treat.
According to veterinarian Dr. Christy Michael, “Dogs and cats are more likely to treasure food that is heavy in sodium and fat because these factors would be less commonly encountered in their ‘wild’ diet.” Since even organic peanut butter is chock full of tasty natural fat and sodium, it’s no wonder your pooch is clamoring for a spoonful.

It’s also one of the few foods we are willing to share with our canine companions.

Since so much of the foods we regularly enjoy are unhealthy for our dogs, many dogs relish the chance to eat the same food as their alpha. According to Dr. Michael, “dogs are fully aware that” peanut butter “is one of the few food items that the leader of the pack will share with them freely.” So it’s an exciting exception to the general rule. 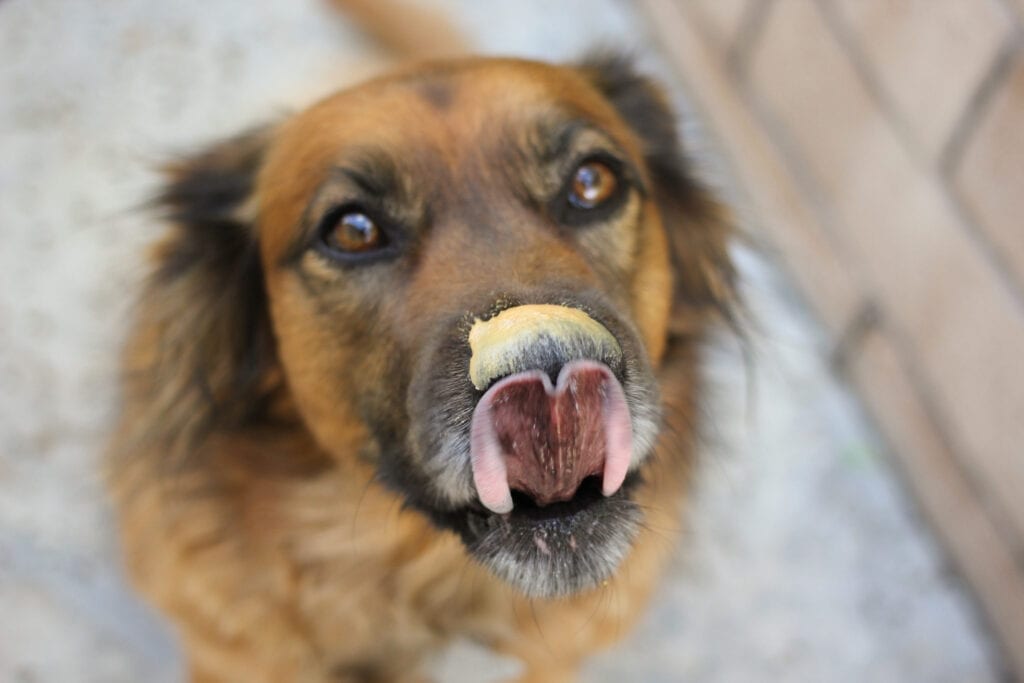 Before giving your pup a taste, make sure to check the ingredient label.

Recently some brands have been including Xylitol in their peanut butter formula. This substitute sweetener is safe for human consumption but is highly toxic for dogs. Ingesting it causes hypoglycemia, an extreme decrease in blood sugar levels, which can be fatal if left untreated. If you believe your dog has ingested Xylitol, contact a vet as soon as possible. Symptoms of Xylitol poisoning include: staggering, lack of coordination, and seizures, and can show up as early as 10 minutes after ingesting the product. So be safe and check your labels before sharing.
For a list of other foods that are highly toxic to dogs, click here. 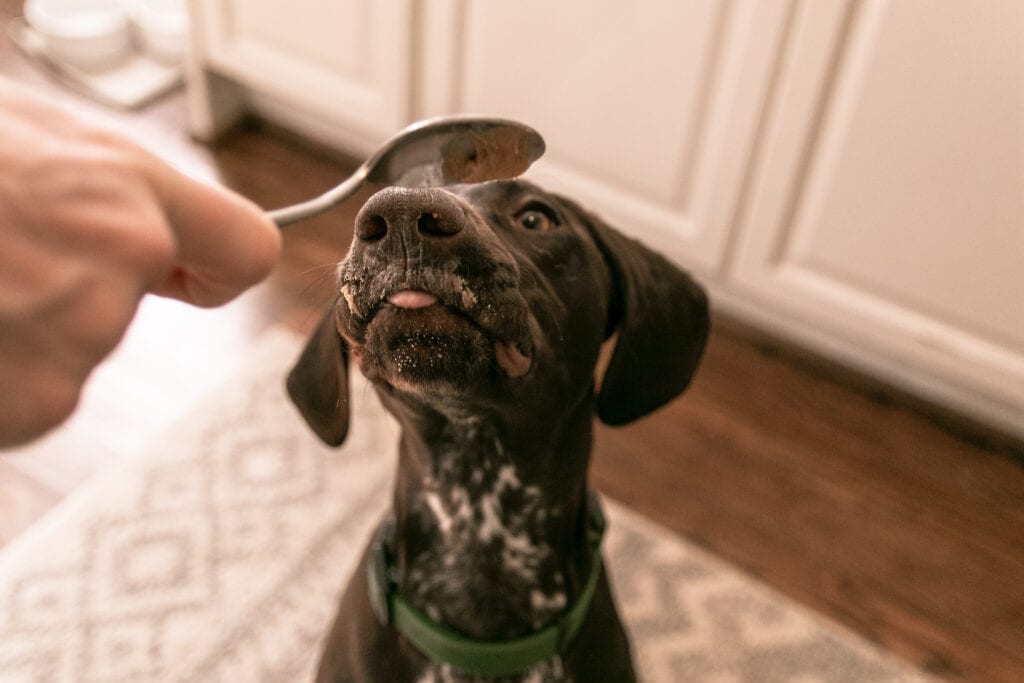 Can Dogs Eat Rice? Everything You Need To Know!

Peanut butter is excellent in small doses as a healthy treat.

But giving your dog large amounts of peanut butter can seriously affect their quality of life. You can talk to your vet for more personalized instruction on how much to feed your pooch, but the general rule is that treats should make up no more than ten percent of your dog’s daily calories. Since peanut butter is particularly dense in calories, making it an occasional reward rather than a daily indulgence may be the key to keeping your dog happy and healthy. In search of peanut butter to spoil you dog with that’s safe for them? They even make peanut butter just for dogs!

This website uses cookies to improve your experience while you navigate through the website. Out of these, the cookies that are categorized as necessary are stored on your browser as they are essential for the working of basic functionalities of the website. We also use third-party cookies that help us analyze and understand how you use this website. These cookies will be stored in your browser only with your consent. You also have the option to opt-out of these cookies. But opting out of some of these cookies may affect your browsing experience.
Necessary Always Enabled
Necessary cookies are absolutely essential for the website to function properly. These cookies ensure basic functionalities and security features of the website, anonymously.
Functional
Functional cookies help to perform certain functionalities like sharing the content of the website on social media platforms, collect feedbacks, and other third-party features.
Performance
Performance cookies are used to understand and analyze the key performance indexes of the website which helps in delivering a better user experience for the visitors.
Analytics
Analytical cookies are used to understand how visitors interact with the website. These cookies help provide information on metrics the number of visitors, bounce rate, traffic source, etc.
Advertisement
Advertisement cookies are used to provide visitors with relevant ads and marketing campaigns. These cookies track visitors across websites and collect information to provide customized ads.
Others
Other uncategorized cookies are those that are being analyzed and have not been classified into a category as yet.
SAVE & ACCEPT
Home » Why Do Dogs Love Peanut Butter?