Home » Why Do Dogs Get The Zoomies?

Why Do Dogs Get The Zoomies? 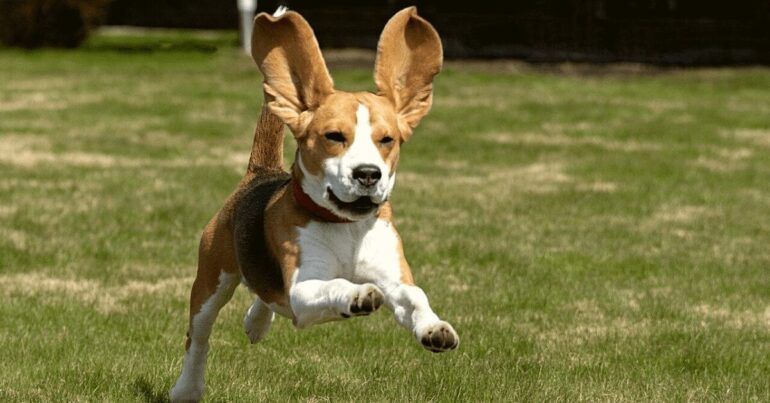 If you’ve ever seen your dog sprint in circles, spin endlessly, or dash around the yard at random, you know exactly what zoomies are.
When the zoomies take over, dogs turn into these crazy energetic blurs of fluff that can also be pretty hilarious.
They’re fun to watch, but have you ever wondered why this dog behavior occurs?
And if your dog doesn’t get the zoomies, is there something different about them?
Understanding dog zoomies is part of being a dog person, and we have all the answers you need.

Even though different dogs express their zoomies in different ways, identifying a case of these crazy bursts of energy isn’t hard.
Some dogs will run in near-perfect circles for no apparent reason. Others will jump and spin like they’re chasing invisible bugs around their heads.
My dog, Bailey, hops into a dramatic play bow before sprinting about 20 feet, bowing again, and then sprinting back the way she just came.
Most of the time, zoomies involve some kind of frantic and repetitive action. It usually happens at top speed and can last anywhere from a few seconds to several minutes.

What is The Zoomies Exactly?

Now that you can identify the zoomies in your dog, you need to know what’s really going on. There’s even a technical term for it: frenetic random activity periods (FRAPs).
This phrase relates to the way dogs get sudden bursts of energy. And that’s exactly what the zoomies are.
When a dog starts running around at full speed, all of their pent-up energy is exploding at the surface. For one reason or another, they suddenly can’t help but let loose and allow that energy to escape in whatever way feels best. When Do Zoomies Happen?

Animal behaviorist Jill Goldman, Ph.D. tells AKC (The American Kennel Club) that these bursts of energy usually happen after a dog is physically contained (like when they’ve been crated) or after bathtime, because it’s a quick way to get rid of nervous energy that’s been pent up.
Like many experts, Andrea Y. Tu, DVM, medical director of Behavior Vets of New York, believes that zoomies are a playful behavior, and, indeed, they’re sometimes preceded or punctuated by play bows.
They were forced to suppress their energy for an extended period of time, and when they finally get a chance to exert that buildup of excess energy, they do so in a spectacular way.
Dogs can also run around like crazy when they get suddenly excited by something.
Bailey almost always gets a case of the zoomies when she’s allowed to play in the snow. Her excitement bubbles over, and she just can’t help herself.
Other dogs get excited when their humans come home from work or when they know dinner is on its way. All they need is a little spark of excitement to push their energy level over the edge.

Everything To Know About Bloat in Your Yorkiepoo

Do All Dogs Get the Zoomies?

While zoomies are common in dogs of all ages, it doesn’t happen with all of our furry friends.
For example, sudden bursts of energy are more likely to happen with younger dogs than senior dogs.
As a dog matures, they’re better at self-control, and they’re usually less hyper. But that doesn’t mean older dogs can’t get a case of the crazies.
Bailey is eight and still zooms alongside her younger friends.
Dogs with generally low energy are also less likely to get the zoomies. Some dog breeds are naturally less energetic than others. They still get excited, but their chill personalities don’t usually result in running around like crazy.
If you’ve never seen your doggy get the zoomies, it’s nothing to worry about. In fact, it could mean that you’re doing a great job at giving your dog enough exercise and keeping it mentally stimulated. Should You Be Worried?

As long as your dog isn’t at risk of hurting themselves, zoomies are perfectly normal and safe. They can happen to any dog, and there’s generally nothing to worry about.
But before you take out your phone to catch the crazies on camera, you should try to steer your dog to a safe place. A wide-open room or fenced-in yard will be best.
You don’t want your dog bashing their head against the coffee table or falling off the couch. It’s also important to realize that when your dog is caught in this spiral of high energy, they’re not likely to remember their basic training.
You can call their name and yell out commands, but there’s a good chance they either won’t hear you or won’t want to listen. For this reason, you don’t want your dog to get the zoomies in an area where they could run away or run into other kinds of trouble, like traffic.
On another note, getting the zoomies too often could mean your dog needs more physical exercise or mental stimulation. A longer walk, dog run, dog park visit, or mental puzzle toy will do them good.
When dogs get zoomies, the best thing you can do as a dog owner is let the episode run its course. As long as you have a fenced yard with a well-maintained lawn and or a safe space for the zoomie to commence.
You can join in and play or watch in amusement as your maniac pooch has the best time of its life.

This website uses cookies to improve your experience while you navigate through the website. Out of these, the cookies that are categorized as necessary are stored on your browser as they are essential for the working of basic functionalities of the website. We also use third-party cookies that help us analyze and understand how you use this website. These cookies will be stored in your browser only with your consent. You also have the option to opt-out of these cookies. But opting out of some of these cookies may affect your browsing experience.
Necessary Always Enabled
Necessary cookies are absolutely essential for the website to function properly. These cookies ensure basic functionalities and security features of the website, anonymously.
Functional
Functional cookies help to perform certain functionalities like sharing the content of the website on social media platforms, collect feedbacks, and other third-party features.
Performance
Performance cookies are used to understand and analyze the key performance indexes of the website which helps in delivering a better user experience for the visitors.
Analytics
Analytical cookies are used to understand how visitors interact with the website. These cookies help provide information on metrics the number of visitors, bounce rate, traffic source, etc.
Advertisement
Advertisement cookies are used to provide visitors with relevant ads and marketing campaigns. These cookies track visitors across websites and collect information to provide customized ads.
Others
Other uncategorized cookies are those that are being analyzed and have not been classified into a category as yet.
SAVE & ACCEPT
Home » Why Do Dogs Get The Zoomies?