Home » What Is The Rarest Eye Color In Dogs?

What Is The Rarest Eye Color In Dogs? 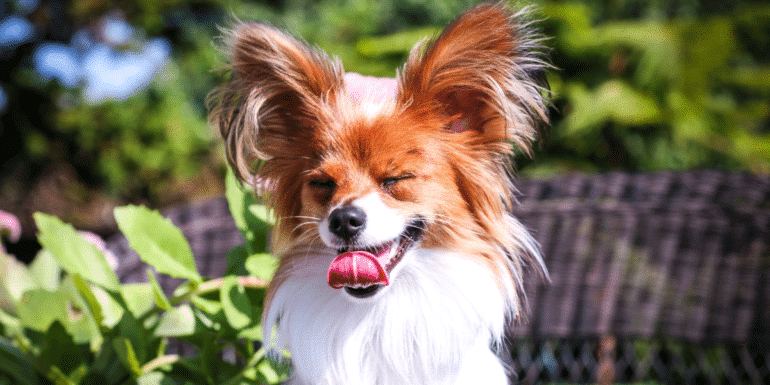 Everyone's heard the saying that the eyes are the windows to the soul. This saying holds true for dogs as well. One thing that stands out about canines is their eyes. It’s hard to resist a dog’s sweet look, especially when their eyes have a striking color such as a deep ocean blue or a forest green. While most dogs are born with a neutral eye color, some dogs do win the gene lottery and are born with a rare eye color.

From ocean blue to emerald green, what is the rarest eye color in dogs? 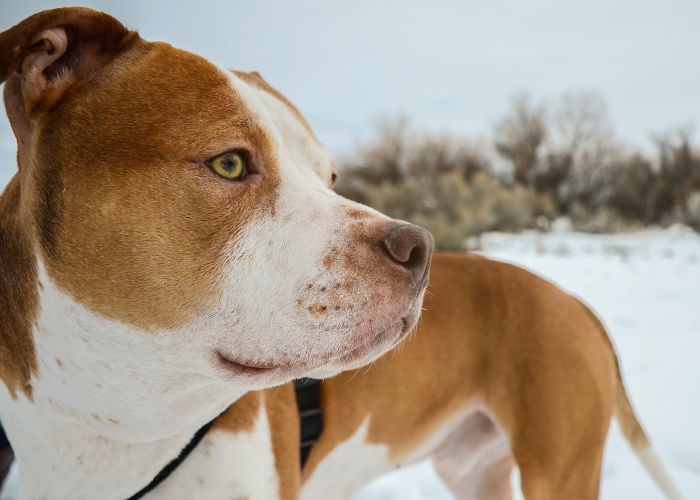 The Rarest Eye Color in Dogs Is Green

Dogs with green eyes are very rare. If you've ever seen a person with green eyes, you know just how enchanting this color can be! As far as dogs are concerned, this unique eye color occurs through simply lucky genetics.

Typically, a dog who has green eyes has the merle gene. This gene affects the way a dog’s coat and eyes look. It’s also the reason why dogs may have mottled patches of color on their coat. It’s important to note that the merle gene doesn’t only cause green pigment in a dog’s eyes. It also produces blue and amber eyes as well.

Although less rare, blue and amber eyes are still not that commonly found in dogs. The merle gene isn’t bound to one breed or dog type. The gene can occur in purebreds or mixed breeds. Yet, the chances of green eyes appearing, in general, is slim to none.

Breeders continue to try to selectively breed pups to keep the merle gene. While green eyes seem nearly impossible to control, breeders have managed to create merle pups with other eye colors.

One perfect example is the French Bulldog. What you may not know is that all French Bulldogs are born with blue eyes, which change as the puppy matures. But, recently, breeders have controlled the merle gene to produce the Blue Merle Frenchie, to make those blue eyes more permanent! 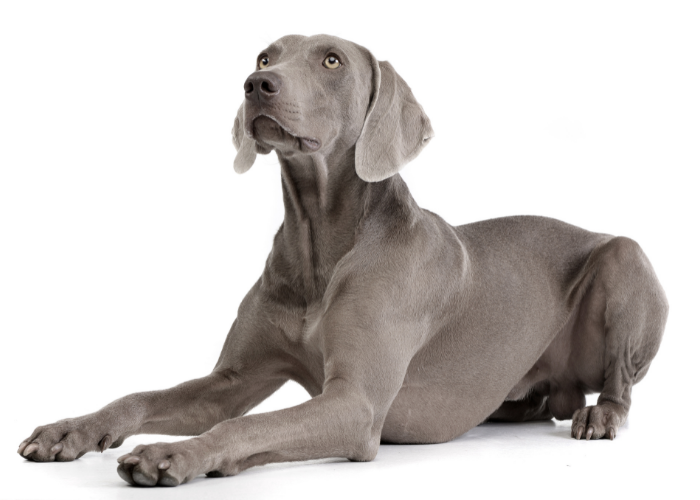 Which Dog Breeds Can Have Green Eyes?

To this day, there is only one purebred dog that has naturally occurring green eyes.

That’s the American Pit Bull Terrier. This dog's eye color isn’t always guaranteed so if you spot a sweet Pit Bull with blue eyes, you know that this puppy is special.

Other breeds can have gorgeous green eyes. Dachshunds, Border Collies, and Australian Shepherds are fantastic examples of green eyes in dogs. These three breeds are known for having multi-colored coats, with those mottled patches the merle gene is responsible for. Paired with green eyes, this gene makes these pups stunners!

A few other breeds that can have captivating green eyes are Dachshunds, Weimaraners, Great Danes, Cocker Spaniels, and Chihuahuas. Unlike the Pit Bull, all of these breeds have green eyes from crossbreeding in their past, rather than from natural occurrences.

I’m sure you’re wondering — why wasn't Siberian huskies and their dazzling eyes mentioned? Well, huskies’ green or blue eyes are caused by a totally different gene. You can tell by how huskies can have lighter-colored eyes yet still maintain a dark, even coat color. Other breeds, like the Welsh Corgi and Beagle, have a recessive and rarely-seen gene marker for baby blue eyes. 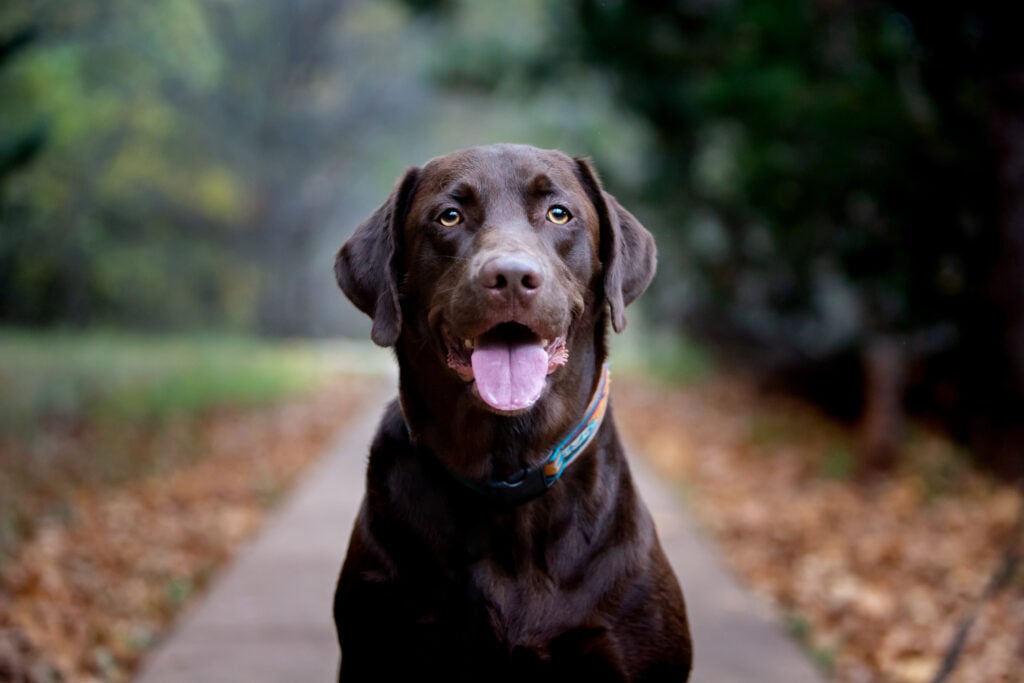 Having green eyes doesn’t mean your dog will have a ton of eye health problems.

The merle gene responsible for green pigment does come with a few potential vision issues, though. There is one particular issue that can arise with the merle gene, called coloboma. This is a missing part of a dog’s iris, something that can result from this specific gene.

The merle gene can also increase a dog’s risk of glaucoma. Dogs with more than one eye color, like Dalmatians, have the highest percentage of deafness in a single breed, making up over eight percent bilaterally and 22 percent unilaterally — which are outstanding numbers.

If you notice your dog’s eye color is changing to blue, this might signal a problem. With cataracts and other eye diseases, the eye may take on a cloudy blue hue. Get your dog to the veterinarian right away as leaving it untreated can cause permanent blindness.

What Is the Most Common Eye Color in Dogs?

Brown eyes are the most common eye color in dogs.

Most puppies are born with fairly light eyes. This is because the melanin in the iris has not yet been fully deposited into the eye. The eye has also not had any exposure to UV rays, which darken the melanin. As the puppy ages, their eyes slowly change colors. At about three or four months, their eyes will reach their adult color. To view a comparison of puppy eyes vs. their true adult colors, check out animal specialist Shelly Hollen's work.

When there is a major increase in melanin, it produces different shades of neutral browns. Higher levels of melanin make eyes darker. Most dogs have brown eyes. Which exact shade, from dark to light brown, varies from breed to breed. Very dark brown eyes can sometimes even appear black, depending on the lighting. 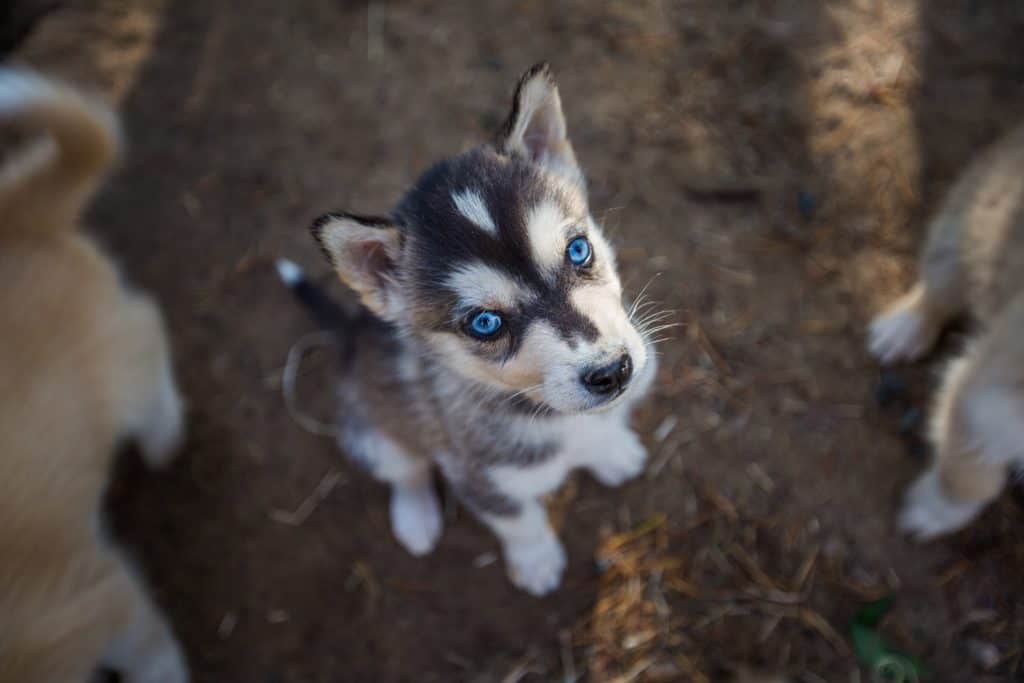 Why Do Some Dogs Have Two Different Colored Eyes?

The merle gene causes more than just green eyes. There are plenty of dogs with this gene that have either amber or blue color eyes.

Hound dogs, retrievers, and Spaniels are adored for their charming amber eyes. Amber eyes come from diluted eumelanin, which is a pigment. It can also come from recessive B or D genes.

What is also pretty fascinating about dogs is that they can have more than one eye color. This is called heterochromia. It’s a condition that is most popular in pups with the merle gene. Heterochromia is most common in Dalmatians, Huskies, Australian Shepherds, and Australian Sheepdogs (Aussies).

It’s also important to mention that dogs with two-toned eyes aren’t more susceptible to vision impairments. Strangely, these dogs are more likely to have hearing issues than eye issues. Nonetheless, it is so cool to see a dog with one blue and one green eye. It makes for one attractive pup! 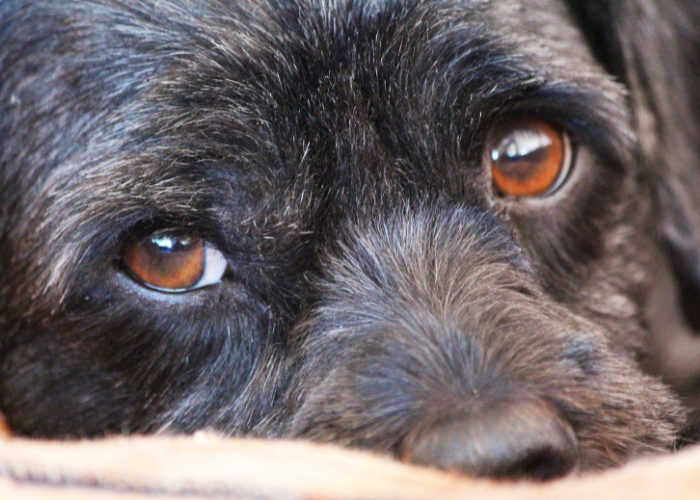 While on the subject of dogs and eye color, you may also be wondering just how much color your pup can see.

The answer is yes, but not on the same level as humans. Scientists discovered that dogs have two cones — compared to humans' three — that limits them to only two colors, blue and yellow. This is also sometimes referred to as dichromatic. So, peoples' third cone allows them to see red, dogs do not see red.

Dogs do have an advantage over humans when it comes to seeing in the dark. Doctor Jerry Klein, AKC's chief veterinary officer, explains that "For the purpose of hunting in the dark, canine eyes have a larger lens and corneal surface and a reflective membrane, known as a tapetum, that enhances night vision. They also have more rods, which improves low-light vision, in the retina."

At some point in your dog's life, you may find that they need some eye protection.

Whether you have them riding in a vehicle and are worried about something lodging in their eye, or they are hitting the slopes with you on your winter vacation, you're probably wondering if there are some type of caps or goggles that you can purchase for your pup.

There are a wealth of options — besides the typical Elizabethan collar you get from the vet. There are goggles, visors, and types of glasses. Whatever you decide to purchase, though, make sure it fits snuggly that it won't wiggle or fall off.

In Your Dog's Eyes

Despite the color of your pup's irises, in your eyes, they're a pretty special canine!

As any pet owner knows, dogs have an abundance of personality and love to give. They also come with their own quirks and preferences — whether that's a silly tippy-toe dance every time you give them a treat or absolutley insisting on licking your face when you walk in the front door.

Eye color certainly isn't the only thing that makes a dog special!

This website uses cookies to improve your experience while you navigate through the website. Out of these, the cookies that are categorized as necessary are stored on your browser as they are essential for the working of basic functionalities of the website. We also use third-party cookies that help us analyze and understand how you use this website. These cookies will be stored in your browser only with your consent. You also have the option to opt-out of these cookies. But opting out of some of these cookies may affect your browsing experience.
Necessary Always Enabled
Necessary cookies are absolutely essential for the website to function properly. These cookies ensure basic functionalities and security features of the website, anonymously.
Functional
Functional cookies help to perform certain functionalities like sharing the content of the website on social media platforms, collect feedbacks, and other third-party features.
Performance
Performance cookies are used to understand and analyze the key performance indexes of the website which helps in delivering a better user experience for the visitors.
Analytics
Analytical cookies are used to understand how visitors interact with the website. These cookies help provide information on metrics the number of visitors, bounce rate, traffic source, etc.
Advertisement
Advertisement cookies are used to provide visitors with relevant ads and marketing campaigns. These cookies track visitors across websites and collect information to provide customized ads.
Others
Other uncategorized cookies are those that are being analyzed and have not been classified into a category as yet.
SAVE & ACCEPT
Home » What Is The Rarest Eye Color In Dogs?