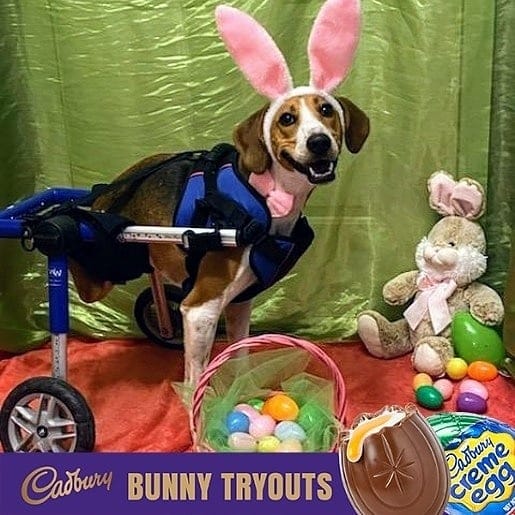 We have a winner! Cadbury announced on March 24 that Lt. Dan is officially this year’s Cadbury Easter Bunny! The sweet two-legged dog posted on Instagram to thank the thousands of people that came together to vote for him. Isn’t he just the cutest Easter bunny?

Easter just wouldn’t be the same without the Cadbury Easter Bunny, but in recent years, the multi-national confectionery company has gotten pretty casual with their definition of “bunny.”
Last year, Cadbury opened up mascot tryouts to all our fluffy friends, and they’re back at it again this year. While all the finalists are adorable, there’s one bunny hopeful that caught our eye.

His name is Lieutenant Dan, and he’s a two-legged dog who wants to be your next Cadbury Easter Bunny.

Laura and Justin Person adopted Lt. Dan from a rescue in Florida when he was only five months old.
Laura says she and her husband fell in love with the Treeing Walker Coonhound after seeing his picture on social media. Even without meeting him, they knew adopting Lt. Dan wouldn’t be like taking in the average dog.
Lt. Dan was born with a birth defect that caused severe deformity in his two hind legs and tail. The shelter did everything they could to care for the cute pup, but they couldn’t guarantee his future. Luckily, Laura and Justin aren’t afraid of making tough decisions and important sacrifices.
With a career in veterinary medicine and experience in the dog rescue world, Laura has a soft spot for dogs in need. She told BarkSpot,

“I love being able to provide homes to dogs that might not otherwise get one.”

Determined to give Lt. Dan the home he deserved, Laura and her husband made the adoption official.

Their new pup hitched a ride on a transport to make it from Florida all the way to his new home in Ohio.
After the introductions, Laura’s first mission was to learn more about Lt. Dan’s birth defect. He was unable to use his hind legs, and he couldn’t move without dragging his legs on the ground. Laura took him to multiple veterinary specialists, and after several evaluations and tests, it was determined that the best thing for Lt. Dan was to have his back legs amputated.
The friendly puppy underwent the surgery when he was six months old. Shortly after, he also had his tail amputated. Now that Lt. Dan isn’t dragging his two back legs, Laura says it’s much easier for him to get around both in and out of his specially-made wheelchair. She describes him as a “go go go dog” who is always up for the next adventure.
She says,

“He is such an expressive dog, and he has so much spunk and happiness for life! He is always running around smiling.”

Lt. Dan wears a diaper because he cannot control his bowels and has a special diet for his sensitive stomach. But none of that matters to him or his family. He’s a happy dog that loves to go on hikes, swims, and visits the park to play with friends. Above all, he never let his disability slow him down or interfere with his love of life.

Ready to make a real impact on the world, Lt. Dan is one of hundreds of pets who tried out to be the 2020 Cadbury Easter Bunny.

Cadbury accepted applications for the coveted position throughout February, and they recently announced their 10 finalists. Lt. Dan is in the running along with nine other impressive contenders.
There’s Conswala, a therapy llama, a celebrity duck named Dilly Bar Dabbler, and a foster cat named Lunchbox who’s looking for a new home. We can’t help but love them all, but there can only be one winner. Our friend Lt. Dan is running with the hope he can spread a message of perseverance and resilience.

“Lieutenant Dan wants to become the next Cadbury Bunny to help inspire others with disabilities. Anyone can accomplish their goals and shouldn’t let being different hold them back!”

The winner of the competition will be featured in Cadbury’s Easter commercial and will receive a prize of $5,000. Everyone is encouraged to vote every day for their favorite Cadbury Easter Bunny.
You can vote for Lt. Dan here! And don’t forget to follow him on Instagram!
Do you have a soft spot for resilient dogs? Read this story of how a dog in wheelchair found the perfect new family.

This website uses cookies to improve your experience while you navigate through the website. Out of these, the cookies that are categorized as necessary are stored on your browser as they are essential for the working of basic functionalities of the website. We also use third-party cookies that help us analyze and understand how you use this website. These cookies will be stored in your browser only with your consent. You also have the option to opt-out of these cookies. But opting out of some of these cookies may affect your browsing experience.
Necessary Always Enabled
Necessary cookies are absolutely essential for the website to function properly. These cookies ensure basic functionalities and security features of the website, anonymously.
Functional
Functional cookies help to perform certain functionalities like sharing the content of the website on social media platforms, collect feedbacks, and other third-party features.
Performance
Performance cookies are used to understand and analyze the key performance indexes of the website which helps in delivering a better user experience for the visitors.
Analytics
Analytical cookies are used to understand how visitors interact with the website. These cookies help provide information on metrics the number of visitors, bounce rate, traffic source, etc.
Advertisement
Advertisement cookies are used to provide visitors with relevant ads and marketing campaigns. These cookies track visitors across websites and collect information to provide customized ads.
Others
Other uncategorized cookies are those that are being analyzed and have not been classified into a category as yet.
SAVE & ACCEPT
Home » UPDATE: Two-Legged Dog Named Lieutenant Dan Is This Year’s Cadbury Easter Bunny