Home » This Dog Survived Cancer, So His Dad Made A Super Bowl Ad To Raise Funds For Canine Cancer Research

This Dog Survived Cancer, So His Dad Made A Super Bowl Ad To Raise Funds For Canine Cancer Research 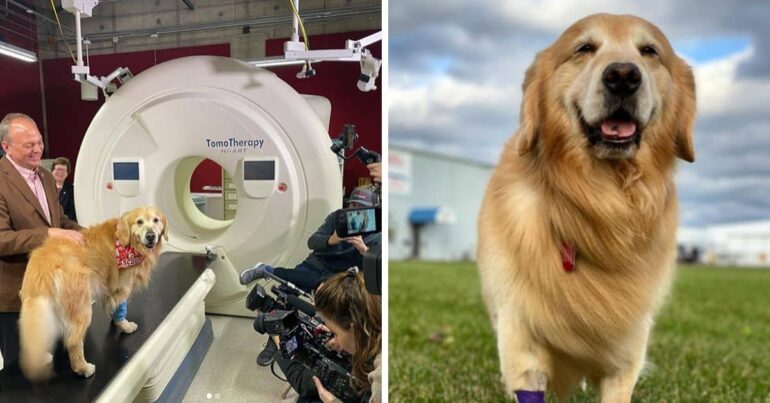 Canine cancer is the number one cause of illness and death in dogs. This devastating diagnosis affects dogs of all ages and breeds. And for too many of our precious pups, there’s not much we can do about it. Cancer is hard to beat, but a Super Bowl ad will support further research.
When David MacNeil, CEO of WeatherTech, got the news that his beloved 7-year-old Golden Retriever had an aggressive form of cancer, he was crushed. Scout was given just a month to live, but those odds didn’t stop him from fighting the disease with everything he had.

Instagram
Even with a bleak prognosis, MacNeil chose to move forward with treatment. Scout underwent chemotherapy last summer along with radiation and immunotherapy. They were fighting a tumor in his heart, and today, UM-Madison says that tumor has all but disappeared.

We’re happy to report that after incredible treatment from the University of Wisconsin’s veterinary program, Scout is not only still with us, he’s kicking cancer’s tail!

Instagram
MacNeil, who is a long-time dog lover, is thrilled to still have his best friend by his side. And to show his appreciation, he’s giving back to Scout’s veterinarians in a big way. He bought a Super Bowl ad and is using those thirty seconds of spotlight to spread awareness about canine cancer and raise money for canine cancer research, treatments, and equipment.
The ad, entitled ‘Lucky Dog,’ will star Scout himself. MacNeil told UM-Madison,

“We wanted to use the biggest stage possible to highlight Scout’s story and these incredible breakthroughs, which are not just limited to helping dogs and pets. This research will help advance cancer treatments for humans as well, so there’s the potential to save millions of lives of all species.”

Get a first glimpse of the Super Bowl ad here!

Instagram
All money raised from the ad will go toward the University of Wisconsin School of Veterinary Medicine.  MacNeil’s goal is to support the ground-breaking research that helped saved his dog’s life and make those treatments more available to other pets.
Scout’s Instagram shows him looking happy and healthy as the WeatherTech official spokescanine. His Super Bowl ad will air during the second quarter of the 2020 Super Bowl. You won’t want to miss it!

This website uses cookies to improve your experience while you navigate through the website. Out of these, the cookies that are categorized as necessary are stored on your browser as they are essential for the working of basic functionalities of the website. We also use third-party cookies that help us analyze and understand how you use this website. These cookies will be stored in your browser only with your consent. You also have the option to opt-out of these cookies. But opting out of some of these cookies may affect your browsing experience.
Necessary Always Enabled
Necessary cookies are absolutely essential for the website to function properly. These cookies ensure basic functionalities and security features of the website, anonymously.
Functional
Functional cookies help to perform certain functionalities like sharing the content of the website on social media platforms, collect feedbacks, and other third-party features.
Performance
Performance cookies are used to understand and analyze the key performance indexes of the website which helps in delivering a better user experience for the visitors.
Analytics
Analytical cookies are used to understand how visitors interact with the website. These cookies help provide information on metrics the number of visitors, bounce rate, traffic source, etc.
Advertisement
Advertisement cookies are used to provide visitors with relevant ads and marketing campaigns. These cookies track visitors across websites and collect information to provide customized ads.
Others
Other uncategorized cookies are those that are being analyzed and have not been classified into a category as yet.
SAVE & ACCEPT
Home » This Dog Survived Cancer, So His Dad Made A Super Bowl Ad To Raise Funds For Canine Cancer Research