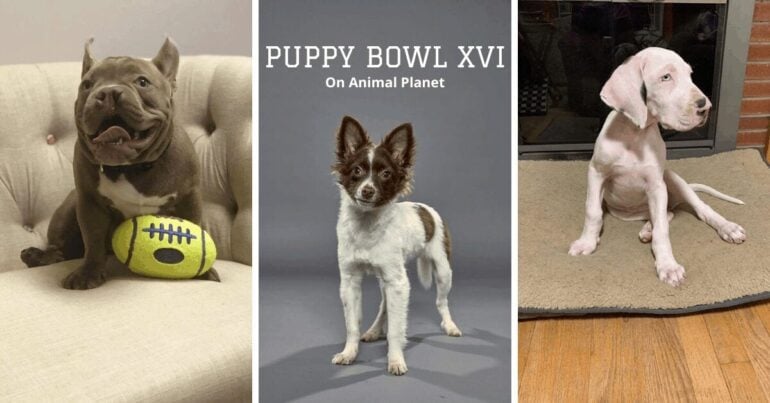 In some houses, Super Bowl Sunday isn’t complete without a mountain of wings and a fountain of beer. In my house, however, it’s all about the Puppy Bowl.

This year, Team Fluff will take on Team Ruff in a head-to-head match of cuteness. There’s not doubt the pups will leave it all on the field, and they’ll hopefully end their season with something better than a trophy or a ring—they’re playing for forever homes! For 16 years, Animal Planet has hosted the Puppy Bowl with a few goals in mind. They want to spread awareness about the importance of animal adoption, and they also want to find their puppy players the perfect new homes.
Puppy Bowl XVI will feature 96 dogs from 61 animal shelters. There are dogs of all breeds, sizes, and personalities. Among the canine competitors, this year’s teams will feature five puppies with special needs.

Facebook
At only 18 weeks old (he was younger in this picture), Filbert is already a star player. He is blind and hearing impaired, but that doesn’t slow him down. Filbert doesn’t think he’s any different than his Puppy Bowl teammates, and he’ll take the field for Team Ruff.
His friends at Double J Dog Ranch in Hauser Lake, Idaho will be cheering him on.

Facebook
Coaches are confident 14-week-old Rooster will fly down the field to secure a victory for Team Fluff. This big-eared cutie is a Bulldog/Staffordshire Terrier mix. He also happens to have a cleft palate. But this guy was born for the spotlight, and his disability doesn’t affect his talent for stealing hearts.
Rooster is from Sanctuary Rescue in Virginia, and you can bet they’re extremely proud of their special pup.

Facebook
There are no days off for this Puppy Bowl super star. Ferris joins the 2020 roster in hopes of finding a family that knows three legs are just as good as four. He’s 20 weeks old and ready to rumble.
Ferris hails from AHenZ57 Pet Rescue in De Soto, Iowa.

Facebook
Three-month-old Kismet brings the bulk and muscle to the Puppy Bowl field. She’s all Great Dane, and she still has a lot of growing to do. This sweet girl is hearing impaired, but she has learned to live with her disability with few difficulties.
Her friends at Green Dogs Unleashed in Virginia say she’s a mellow girl who loves long walks and cuddles on the couch. She’s with a foster family now, but she can’t wait to head to a forever home.

Facebook
Small but mighty, Paprika will see Puppy Bowl field time with Team Ruff. He is hearing impaired and was found wandering the streets with his mother when he was only a few weeks old. It took a while for this pint-sized player to build up his confidence, but now he’s an energetic athlete who never slows down.
The staff and volunteers at Young-Williams Animal Center can’t wait to cheer him on as he makes a name for himself both on and off the field.
Each of these special needs puppies will have their time to shine during the biggest Puppy Bowl yet. In the past, the event has led to 100% of the furry footballers finding new homes. The odds are good for these five pups and the dozens of others looking for adopters.
Puppy Bowl XVI will air Sunday at 3 p.m. ET on Animal Planet.
Will you be watching?

This website uses cookies to improve your experience while you navigate through the website. Out of these, the cookies that are categorized as necessary are stored on your browser as they are essential for the working of basic functionalities of the website. We also use third-party cookies that help us analyze and understand how you use this website. These cookies will be stored in your browser only with your consent. You also have the option to opt-out of these cookies. But opting out of some of these cookies may affect your browsing experience.
Necessary Always Enabled
Necessary cookies are absolutely essential for the website to function properly. These cookies ensure basic functionalities and security features of the website, anonymously.
Functional
Functional cookies help to perform certain functionalities like sharing the content of the website on social media platforms, collect feedbacks, and other third-party features.
Performance
Performance cookies are used to understand and analyze the key performance indexes of the website which helps in delivering a better user experience for the visitors.
Analytics
Analytical cookies are used to understand how visitors interact with the website. These cookies help provide information on metrics the number of visitors, bounce rate, traffic source, etc.
Advertisement
Advertisement cookies are used to provide visitors with relevant ads and marketing campaigns. These cookies track visitors across websites and collect information to provide customized ads.
Others
Other uncategorized cookies are those that are being analyzed and have not been classified into a category as yet.
SAVE & ACCEPT
Home » Meet The 5 Special Needs Puppies That Will Take The Field For Puppy Bowl XVI