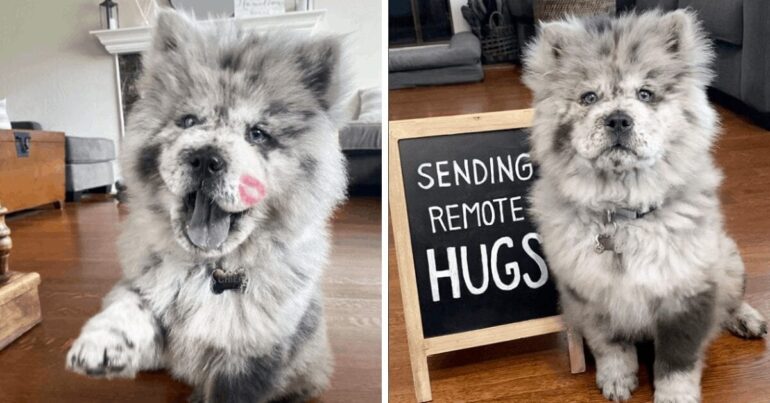 There’s no such thing as a puppy that isn’t cute. Whether they have long hair, short hair, floppy ears, or whatever else, I fall in love with every little pup I lay eyes on.  Even I have to admit, however, that this tiny Oreo cloud named Chief has something special in terms of extreme cuteness.

Just look at his face!

And all that fluff!

When Chief’s mom, Sarah Hamilton, posted pictures of her new puppy online, it didn’t take long for basically the entire Internet to fall in love. Sarah posted in the giant Facebook group called Dogspotting Society. She received thousands of likes and comments, and now it seems everyone wants their own cookies n’ cream puppy.
Chief is a growing ball of fluff now, but the blue-eyed puppy won’t be little for long. Sarah told Bored Panda that she and her husband named the puppy Chief because they know he’ll grow up to be a strong, impressive dog. He’s described as being a “merle Chow,” and Sarah is also awaiting DNA test results to get an exact breakdown of his genetics.

Regardless of his breed, this Oreo cloud is a 100% good boy.

While his official name is Chief, it’s safe to say the Internet will forever recognize him by his appropriate nickname—Oreo cloud. Chief’s unique coloring obviously makes him stand out. And his blue eyes, black tongue, and insanely soft fluff complete his adorable package.
We could stare at pictures of this puppy for hours, but Chief is more than just his good looks. Sarah reports that he is extremely smart. And even at a young age, he already has a big personality. He loves bath time, snuggles, and helping out with household chores.

Chief is busy learning important puppy skills, but Sarah also plans to train him to be a therapy dog. Current training opportunities are limited due to the pandemic, but Chief is receiving a lot of at-home training and attention. Sarah watches dog training videos on YouTube, and her little pup is already proving to be a star student.
Once the world opens back up, Sarah says she plans to enroll Chief in classes with the goal to pass an official therapy certification test. From there, she wants to take her sweet pup on weekly trips to children’s hospitals to share the joy that comes with meeting a real-life Oreo cloud.
Follow Chief on Facebook and Instagram for more adorable pictures!
Need more cute puppies in your life? Meet a Dalmatian who wears his heart (literally) on his nose! Click here

This website uses cookies to improve your experience while you navigate through the website. Out of these, the cookies that are categorized as necessary are stored on your browser as they are essential for the working of basic functionalities of the website. We also use third-party cookies that help us analyze and understand how you use this website. These cookies will be stored in your browser only with your consent. You also have the option to opt-out of these cookies. But opting out of some of these cookies may affect your browsing experience.
Necessary Always Enabled
Necessary cookies are absolutely essential for the website to function properly. These cookies ensure basic functionalities and security features of the website, anonymously.
Functional
Functional cookies help to perform certain functionalities like sharing the content of the website on social media platforms, collect feedbacks, and other third-party features.
Performance
Performance cookies are used to understand and analyze the key performance indexes of the website which helps in delivering a better user experience for the visitors.
Analytics
Analytical cookies are used to understand how visitors interact with the website. These cookies help provide information on metrics the number of visitors, bounce rate, traffic source, etc.
Advertisement
Advertisement cookies are used to provide visitors with relevant ads and marketing campaigns. These cookies track visitors across websites and collect information to provide customized ads.
Others
Other uncategorized cookies are those that are being analyzed and have not been classified into a category as yet.
SAVE & ACCEPT
Home » Meet This Adorable Oreo Cloud Who Is Training To Be A Therapy Dog