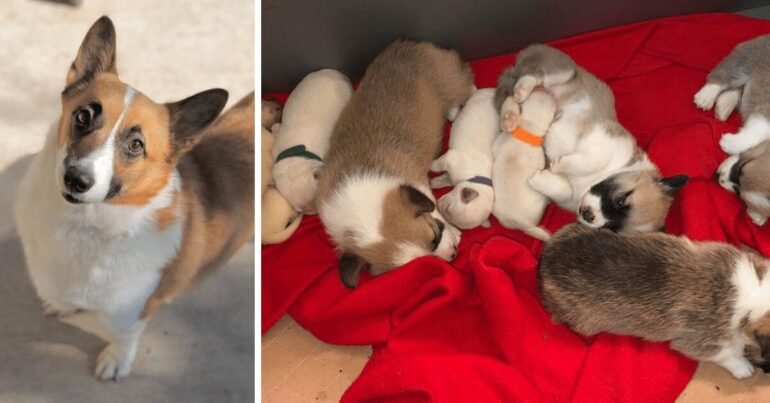 Animal rescuers from Lone Star Dog Ranch & Dog Ranch Rescue in Texas are calling what happened between a mama Corgi and four newborn Lab puppies “magical.’ After the Lab puppies’ mother died shortly after giving birth, shelter staff was faced with a serious problem. They were prepared to bottle feed the babies by hand, but they knew nothing could replace a mother’s love and care. That’s where a rescued Corgi named Angela came into the picture, and she brought about the sweetest kind of happy ending. Angela was rescued from a puppy mill when she was already pregnant. The mom-to-be spent time with Lone Star Dog Ranch staff and fosters while she prepared to give birth, and she eventually welcomed four adorable puppies into the world. Angela proved herself to be a caring and devoted mother, and the plan was for them to live with a foster until they were ready to be adopted.
Everything was on track until the newly rescued mama Lab passed away. Her four helpless babies needed a mother’s love, so rescuers had an idea. Angela was doing so well with her own puppies, they decided to introduce the new litter and see what happened. It’s not uncommon for nursing mothers to “adopt” puppies that aren’t their own, but Angela’s situation was a little more difficult. She already had four puppies that were three-weeks old, and there was no knowing how she would react to four new babies that were much younger.
Renee Eden with Lone Star Dog Ranch told Fox 4,

“Angela’s puppies were 3 weeks old, so to introduce some newborn puppies to a mama who’s got 3-week-old pups can be a little tricky, and most of the time they kind of turn their back on that.”

They called it a long shot, but they were in for the best kind of surprise. Despite the age difference, Angela was immediately interested in the orphaned pups. Rescuers started with only one Lab puppy, and when Angela let that puppy start to nurse, they added in the other three. They watched as Angela amazingly treated the new puppies just like her own.
When the four Labs were finished nursing, rescuers thought they would move them back to their own incubator to give Angela a break. Angela, however, had different plans. She started jumping and barking at the incubator while clearly sending the message that those puppies were now hers. Rescuers returned the puppies to her, and the Corgi mama started grooming and cuddling them as if they had been hers all along.

Since that first day, the rescue reports Angela has been a devoted mother to all eight puppies, including the four Labs. She sleeps with them every night and makes sure every pup nurses as much as they want. The rescue wrote on Facebook,

“We could not have been any more blessed with this terrible situation.”

Thanks to Angela, the four orphaned puppies will grow up with all the benefits that come from a mother’s love. Angela and all eight of her puppies have already been claimed for adoption, and they’ll head to their new homes when they’re fully ready. While Angela’s adoption is being delayed while she continues to care for her younger adopted puppies, her new family completely understands. They’re proud of their future dog for taking care of those pups, and Angela will go to her new home after showing everyone what the power of a mother’s love can really do.
All images via Facebook/Lone Star Dog Ranch & Dog Ranch Rescue

This website uses cookies to improve your experience while you navigate through the website. Out of these, the cookies that are categorized as necessary are stored on your browser as they are essential for the working of basic functionalities of the website. We also use third-party cookies that help us analyze and understand how you use this website. These cookies will be stored in your browser only with your consent. You also have the option to opt-out of these cookies. But opting out of some of these cookies may affect your browsing experience.
Necessary Always Enabled
Necessary cookies are absolutely essential for the website to function properly. These cookies ensure basic functionalities and security features of the website, anonymously.
Functional
Functional cookies help to perform certain functionalities like sharing the content of the website on social media platforms, collect feedbacks, and other third-party features.
Performance
Performance cookies are used to understand and analyze the key performance indexes of the website which helps in delivering a better user experience for the visitors.
Analytics
Analytical cookies are used to understand how visitors interact with the website. These cookies help provide information on metrics the number of visitors, bounce rate, traffic source, etc.
Advertisement
Advertisement cookies are used to provide visitors with relevant ads and marketing campaigns. These cookies track visitors across websites and collect information to provide customized ads.
Others
Other uncategorized cookies are those that are being analyzed and have not been classified into a category as yet.
SAVE & ACCEPT
Home » Rescued Corgi Mama Adopts Four Orphaned Lab Puppies