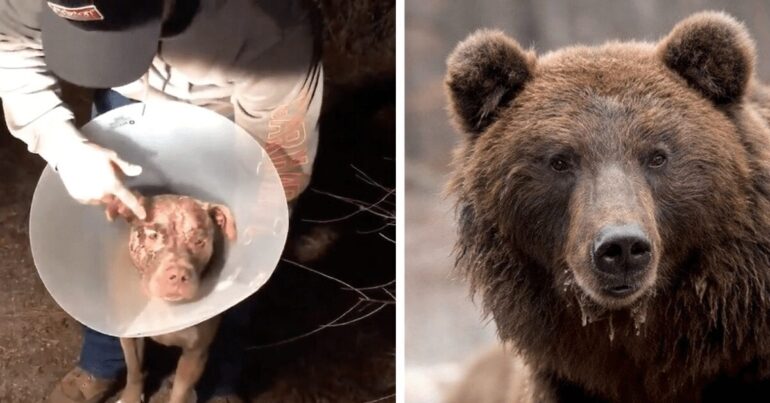 When dog people say they consider their pups to be part of the family, they’re not joking. That claim comes with all the love and devotion you’d expect them to show for a child or sibling. Protectiveness is a part of that love, and most dog people would do absolutely anything to keep their pups from harm. That’s exactly what Kaleb Benham of California proved when he saved his beloved rescue dog from the jaws of a hungry 350-pound  bear.
Kaleb rescued his pal Buddy from a shelter several years ago. The two became fast friends, and they enjoy spending time together exploring outside. Weighing in at 90 pounds, Buddy is a big dog with an adventurous spirit. He was outside his house right before Thanksgiving when Kaleb started to hear growling and strange sounds. When the dog dad looked around, he was shocked to see a huge bear about 100  yards away. Even more shocking, the bear was dragging Buddy away.

A man’s love for man’s best friend is a powerful force. Kaleb Benham from Grass Valley took on a 350 pound bear that was attacking his rescue dog, “Buddy.” Kaleb said he heard a growl the saw the bear dragging buddy “by his head.” So he tackled the bear and punched it pic.twitter.com/XAhTrS2AEC

Without hesitating, Kaleb ran to help. He says the bear had Buddy’s head in its mouth as it was trying to subdue the struggling dog and take him farther from the house. With his mind focused on saving his best friend, Kaleb did the only thing he could think of–he tackled the bear and started swinging his fists. He told CBS Sacramento,

“I just ran down there, plowed into the bear, tackled it and grabbed it by the throat and started hitting it in the face and the eye until it let go.”

Kaleb’s attack worked to free Buddy from the bear’s teeth, but the dog was in bad shape. As the bear retreated, Kaleb could see Buddy needed immediate help. The problem was, the closest vet was closed due to the pandemic. He thought he would lose his dog, but Mother Lode Veterinary Hospital was open and ready to perform emergency surgery.
The surgery lasted three and half hours while Buddy needed staples, stitches, and tubes inserted into his head. Kaleb waited anxiously the entire time and was filled with relief when Buddy pulled through. Buddy is now recovering at home, and Kaleb is happy to still have his best friend by his side. He says the bear is still out there, and has even returned to the house since the attack. Buddy, however, is staying close to Kaleb, the man who rescued him not once, but twice.

This website uses cookies to improve your experience while you navigate through the website. Out of these, the cookies that are categorized as necessary are stored on your browser as they are essential for the working of basic functionalities of the website. We also use third-party cookies that help us analyze and understand how you use this website. These cookies will be stored in your browser only with your consent. You also have the option to opt-out of these cookies. But opting out of some of these cookies may affect your browsing experience.
Necessary Always Enabled
Necessary cookies are absolutely essential for the website to function properly. These cookies ensure basic functionalities and security features of the website, anonymously.
Functional
Functional cookies help to perform certain functionalities like sharing the content of the website on social media platforms, collect feedbacks, and other third-party features.
Performance
Performance cookies are used to understand and analyze the key performance indexes of the website which helps in delivering a better user experience for the visitors.
Analytics
Analytical cookies are used to understand how visitors interact with the website. These cookies help provide information on metrics the number of visitors, bounce rate, traffic source, etc.
Advertisement
Advertisement cookies are used to provide visitors with relevant ads and marketing campaigns. These cookies track visitors across websites and collect information to provide customized ads.
Others
Other uncategorized cookies are those that are being analyzed and have not been classified into a category as yet.
SAVE & ACCEPT
Home » Man Saves Rescue Dog By Tackling 350-Pound Bear