Home » It Took 2 Years Of Trying, But This Lost Dog Is Finally Safe

It Took 2 Years Of Trying, But This Lost Dog Is Finally Safe 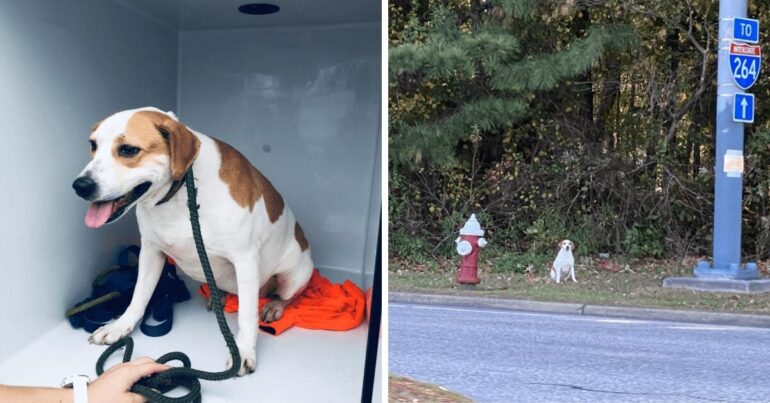 A rescue dog named Lucy has been putting Virginia Beach animal rescuers to the test for the past two years. This street savvy canine has managed to avoid all human contact and elude capture despite several attempts to bring her in. Lucy is fearful of strangers and nervous in most situations. In her mind, it was much safer to accept food from afar and run whenever someone got too close. But with busy roadways and nighttime temperatures dropping, getting Lucy to safety has always been a priority. Thankfully, the long-lost rescue dog is FINALLY off the streets and in safe hands.

Lucy first went on the run two years ago only a few days after she was adopted from a local Virginia Beach animal rescue. The nervous dog was spooked, and because she didn’t have time to bond with her new family, she had no intention of going back. Instead, the scared pup took to the streets and did her best to stay away.
For years, Lucy lived life as a stray. She stayed in what was known as her territory and was often spotted near a popular intersection. Residents and animal control knew she was there, but no one could manage to bring her in. With time, kind-hearted residents started leaving food for Lucy and tossing her treats every time they passed.
While the intentions were kind, the easy and regular access to food most likely contributed to Lucy’s elusive nature. She never went hungry, and no amount of food could convince her to get too close to either a potential savior or humane trap.

It was starting to look like Lucy would be a stray forever, but then Virginia Beach Animal Control made an exciting Facebook announcement. Lucy had been caught!
The shelter posted that Virginia Beach resident Regina Quinn had successfully done what so many others had tried. For about three months, Quinn had taken to visiting Lucy’s territory with her own dog by her side. With every visit, she would wait patiently and never pushed past Lucy’s boundaries. Her objective was to get Lucy used to her presence without ever making her feel like she was losing control. Quinn’s dog likely helped Lucy feel comfortable, and she eventually approached the kind woman and allowed herself to finally be brought in.

Lucy is now safe and warm with Virginia Beach Animal Control. A veterinary exam proved she had never gone hungry, and is actually overweight, but she is otherwise in good health. Lucy will eventually be available for adoption, but rescuers want to give her time to decompress. She has been through a lot, and the goal is to improve her confidence so that when she does find the right family, she won’t want to run away again.

This website uses cookies to improve your experience while you navigate through the website. Out of these, the cookies that are categorized as necessary are stored on your browser as they are essential for the working of basic functionalities of the website. We also use third-party cookies that help us analyze and understand how you use this website. These cookies will be stored in your browser only with your consent. You also have the option to opt-out of these cookies. But opting out of some of these cookies may affect your browsing experience.
Necessary Always Enabled
Necessary cookies are absolutely essential for the website to function properly. These cookies ensure basic functionalities and security features of the website, anonymously.
Functional
Functional cookies help to perform certain functionalities like sharing the content of the website on social media platforms, collect feedbacks, and other third-party features.
Performance
Performance cookies are used to understand and analyze the key performance indexes of the website which helps in delivering a better user experience for the visitors.
Analytics
Analytical cookies are used to understand how visitors interact with the website. These cookies help provide information on metrics the number of visitors, bounce rate, traffic source, etc.
Advertisement
Advertisement cookies are used to provide visitors with relevant ads and marketing campaigns. These cookies track visitors across websites and collect information to provide customized ads.
Others
Other uncategorized cookies are those that are being analyzed and have not been classified into a category as yet.
SAVE & ACCEPT
Home » It Took 2 Years Of Trying, But This Lost Dog Is Finally Safe