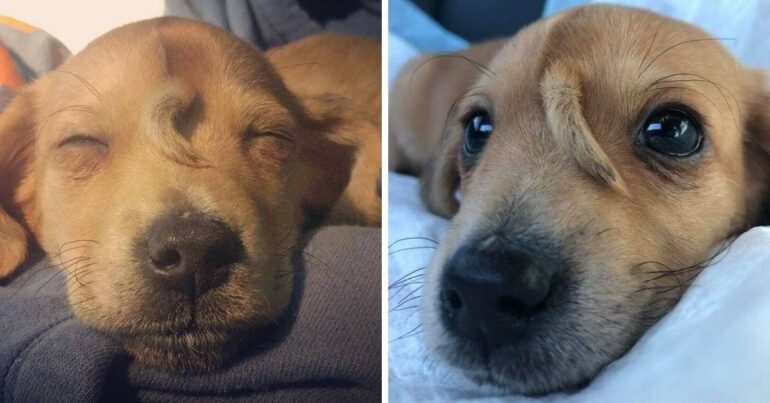 Scammers have once again proven that some people just don’t deserve dogs.

We all fell in love with Narwhal, a puppy with a tail growing out of his face, the second his picture went online. The unique rescue puppy captured the world’s attention in a matter of days. Mac’s Mission Animal Rescue, the organization that rescued and is caring for Narwhal, was thrilled that the attention was also highlighting other rescue animals. Narwhal’s story was doing a lot of good to promote animal adoption, but then scammers got an idea. Mac’s Mission recently discovered people are trying to profit off the unicorn puppy. And they’ve already made a lot of money.

TMZ reported that a number of fake Narwhal accounts have surfaced on social media. They’re asking for donations to pay for Narwhal’s medical care. Rochelle Steffen, founder of Mac’s Mission, has reported several of these accounts in an effort to shut them down.
So far, these fake accounts have collected hundreds of dollars. They look legitimate by sharing pictures of the unicorn puppy, but the scammers behind them have no association to Mac’s Mission. They’re only interested in taking advantage of a viral story with a cute face.
While Mac’s Mission works on making the public aware of the scams and shutting them down, they want everyone to know that they’re not interested in making a profit off of Narwhal. Their only goal is to do what’s best for the rescue puppy—the same as they do for every dog in their care. They want to be clear that Narwhal is not for sale, but he will eventually be available for adoption.

Steffen reported that someone even offered to pay $7,000 for the unicorn puppy. The shelter turned them down. Mac’s Mission wants to make sure their new celebrity goes to a home that will truly love and care for him. When he’s ready to be adopted, his adoption fee will be the standard $150. Everyone interested is also required to fill out an application. Steffen knows that she and her team have a big job ahead of them. They’ll sift through applications to find an adopter that wants Narwhal for the right reasons.
If you’re interested in supporting Mac’s Mission Animal Rescue (or any other non-profit organization), do your research to make sure your money goes to the right place. Steffen said that while Narwhal’s medical bills have been covered, any donations they receive through the official donation link on their website will go toward other deserving rescue dogs.
Featured image via Facebook/Mac the Pitbull

This website uses cookies to improve your experience while you navigate through the website. Out of these, the cookies that are categorized as necessary are stored on your browser as they are essential for the working of basic functionalities of the website. We also use third-party cookies that help us analyze and understand how you use this website. These cookies will be stored in your browser only with your consent. You also have the option to opt-out of these cookies. But opting out of some of these cookies may affect your browsing experience.
Necessary Always Enabled
Necessary cookies are absolutely essential for the website to function properly. These cookies ensure basic functionalities and security features of the website, anonymously.
Functional
Functional cookies help to perform certain functionalities like sharing the content of the website on social media platforms, collect feedbacks, and other third-party features.
Performance
Performance cookies are used to understand and analyze the key performance indexes of the website which helps in delivering a better user experience for the visitors.
Analytics
Analytical cookies are used to understand how visitors interact with the website. These cookies help provide information on metrics the number of visitors, bounce rate, traffic source, etc.
Advertisement
Advertisement cookies are used to provide visitors with relevant ads and marketing campaigns. These cookies track visitors across websites and collect information to provide customized ads.
Others
Other uncategorized cookies are those that are being analyzed and have not been classified into a category as yet.
SAVE & ACCEPT
Home » Scammers Are Taking Advantage Of Adorable Unicorn Puppy Named Narwhal