Home » After 500 Days In A Shelter, This Dog Has A Home For The Holidays

After 500 Days In A Shelter, This Dog Has A Home For The Holidays 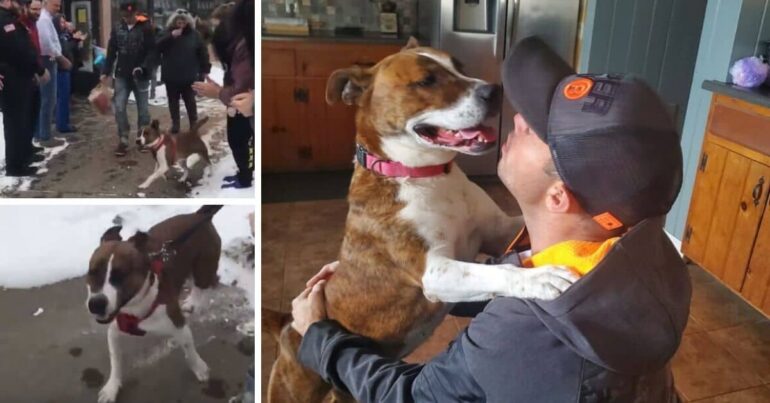 With all the sad news stories taking up our feeds, this is exactly what we want to see so close to the holidays. Bonita spent over 500 days at the Niagara SPCA in New York. She was the shelter’s longest resident, but all that waiting has paid off. She just met her perfect person and received the best Christmas gift a rescue dog could ever get—a home!

As a large breed dog, Bonita was was one of the shelter’s harder dogs to get adopted.

She needed to go to a home with no small children or other dogs. She wants her people all to herself, and those requirements were tough to match. For almost two years, potential adopters walked right past her kennel. Bonita watched all the other dogs find forever homes, but it never seemed to be her turn.
Then one day, the exact right person walked into the shelter. He instantly fell in love with Bonita, and he knew it was meant to be. After talking about all of Bonita’s specific needs, the man decided he could give her the perfect home. He made the adoption official, and the entire shelter was overjoyed to see one of their favorite dogs finally get exactly what she deserved.
Bonita left the shelter for the last time with all her friends lined up to say goodbye. They threw confetti and cheered her name while the ecstatic pup jumped with joy. Her tail never stopped wagging as she eagerly followed her new dad into her new life.
Watch the heartwarming video below.  It’s impossible to watch this without smiling!

Bonita’s story is a perfect example of how important no-kill animal shelters are. Bonita is a good dog who has had a rough past. Humans failed her in the past, and without Niagara SPCA, her future could have been much different. They gave her a temporary home while she waited for this one special day. Every rescue dog deserves a loving home, and we’re SO happy that Bonita’s wish came true right in time for the holidays.
Featured image via Facebook/Ray Kinz

This website uses cookies to improve your experience while you navigate through the website. Out of these, the cookies that are categorized as necessary are stored on your browser as they are essential for the working of basic functionalities of the website. We also use third-party cookies that help us analyze and understand how you use this website. These cookies will be stored in your browser only with your consent. You also have the option to opt-out of these cookies. But opting out of some of these cookies may affect your browsing experience.
Necessary Always Enabled
Necessary cookies are absolutely essential for the website to function properly. These cookies ensure basic functionalities and security features of the website, anonymously.
Functional
Functional cookies help to perform certain functionalities like sharing the content of the website on social media platforms, collect feedbacks, and other third-party features.
Performance
Performance cookies are used to understand and analyze the key performance indexes of the website which helps in delivering a better user experience for the visitors.
Analytics
Analytical cookies are used to understand how visitors interact with the website. These cookies help provide information on metrics the number of visitors, bounce rate, traffic source, etc.
Advertisement
Advertisement cookies are used to provide visitors with relevant ads and marketing campaigns. These cookies track visitors across websites and collect information to provide customized ads.
Others
Other uncategorized cookies are those that are being analyzed and have not been classified into a category as yet.
SAVE & ACCEPT
Home » After 500 Days In A Shelter, This Dog Has A Home For The Holidays