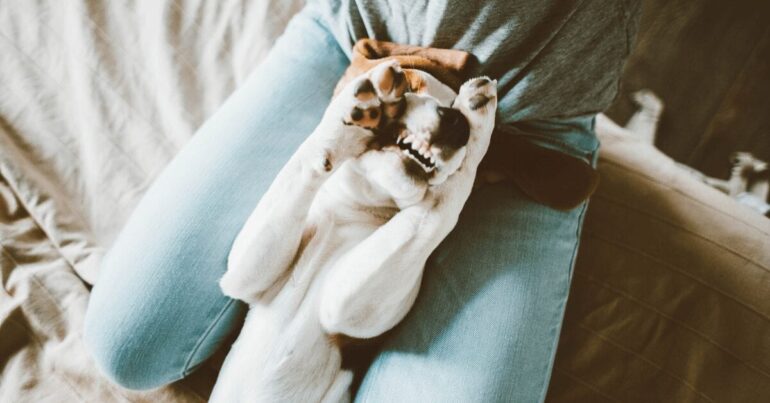 Dogs have been man’s best friend for centuries, and I’m willing to bet some of the dog myths on this list have been around for just as long. Some are innocent inaccuracies, but they can also lead to harmful misunderstandings. No one is quite sure how they got started, but for one reason or another, these falsities have turned into common knowledge. Thanks to veterinary scientists and animal behaviorists, we now have the evidence to debunk these myths for good. My childhood dog was 14 years old when he learned to fetch the paper from the end of the driveway and bring it to our door. It took maybe three days of training, and after that, he brought in the paper every day, without fail.
The myth that you can’t teach old dog new tricks was officially debunked by researchers from the Messerli Research Institute. The study looked at 95 dogs ranging in age from five months to 13 years. They found that age wasn’t a factor when it came to an individual dog’s learning ability. Both young dogs and old learned the same tricks and remembered those tricks six months later.

MYTH: Dogs can only see in black and white. It was once a common understanding that dogs are completely colorblind, and they see the world in shades of black, gray, and white. Thanks to more advanced science, however, we now know that’s not true.
Dogs have a kind of red-green colorblindness, and they see in shades of blue, yellow, and gray. We know this based on the types of cones and rods in the canine eye. Dogs might have trouble distinguishing between a red Kong when it’s on green grass, but they definitely see more than black and white.

MYTH: Dogs only eat grass when they feel sick. The belief that dogs only eat grass when they feel sick has a lot of anecdotal evidence to back it up. How many times have you seen your dog throw up after grazing on grass in the yard? It’s true that grass can sometimes make dogs throw up, but there’s nothing that says dogs eat grass to induce vomiting.
There are several studies that effectively debunk this popular dog myth. Fewer than 10% of dogs observed eating grass show signs of being sick. A more likely explanation is that they simply like the taste, and the occasional vomiting is an unintended consequence. We’ve probably all seen what happens when a male dog gets “the urge.” They can mount other dogs, your leg, or even your favorite pillow. And while there’s no doubt that males are more likely to exhibit humping behavior, that doesn’t mean female dogs are immune.
Whole Dog Journal states that humping isn’t always a sexual behavior. Female dogs often hump because they’re extra excited or even stressed out. It’s an outlet for all their energy, and spaying is not likely to change the behavior.

MYTH: You can determine your dog’s age in “human years” by multiplying by seven. This dog myth has been around for as long as we can remember. It probably got started because when you look at the average lifespan of a dog versus that of a human, you could say humans live an average of seven times longer than dogs. But that’s an extremely rough estimate, and it doesn’t make a whole lot of sense when you think about it.
Saying one human year equals seven dog years doesn’t account for the fact that different dog breeds have different lifespans. While it’s not uncommon for Chihuahuas to live to be 15, even 20, years old, Great Danes have an average lifespan of only about 10 years. Dogs also age at different rates than humans. They age quickly early in life, and that rate slows down as they get older. Multiplying by seven simply doesn’t work. As much as I want to believe this dog myth when my pups cover my face in kisses, it’s not true. The idea that dogs have clean mouths probably comes from the fact that dogs that lick their wounds sometimes heal faster than normal. But that healing power doesn’t have anything to do with the cleanliness of their mouths. Instead, researchers believe it’s because licking can remove dead tissue and stimulate circulation.
In most cases, licking a wound is the worst thing a dog could do. That’s because a dog’s mouth is full of bacteria that could get under the skin and cause infection. Dr. Carly Fox, a veterinarian at the Animal Medical Center, told Business Insider that both human and canine mouths have over 200 types of bacteria. That’s far from clean!

MYTH: If your dog has a dry nose, it means they’re sick. If you ever boop your dog’s snoot to find it dry and warm, don’t panic. Contrary to popular belief, a dry nose is not a direct sign that a dog is sick. First off, some dogs naturally have drier noses than others. Also, a dry nose could mean that your dog was just laying out in the sun or near a heater.
If anything, a dog’s dry nose could indicate that they’re slightly dehydrated and could use a drink. A dry and cracked nose, on the other hand, does warrant your attention. It could mean your dog has a slight skin condition, and they could use some moisturizing balm to be more comfortable.

MYTH: Fluffy dogs should be shaved in summer so they don’t get too hot. It’s easy to look at a fluffy dog and worry about them overheating. But regardless of what it looks like, a dog having a fluffy fur coat isn’t the same as a human wearing a bulky sweater in the middle of summer. Most dogs with long hair have what’s called an undercoat. These double-coated dogs shed their undercoat in warmer months, and the outer hairs serve as insulation to protect them from heat.
Shaving a double-coated dog during summer will most likely make them feel hotter, not cooler. Without that protective fur, their skin is exposed to heat.

MYTH: When a dog pees on the carpet, rubbing their nose in the mess will teach them not to do it again. House training isn’t easy, and rubbing a dog’s nose into the carpet will make it harder. Some people think that the only way to show a dog that they did something wrong is to scold them and literally shove their face in it. But trainers have long since proven that this training method is ineffective.
Instead of showing a dog the error of their ways, rubbing their nose in the carpet will only scare them. It will also convince your pup that the next time they need to pee, they need to find a sneakier spot to lift their leg. It doesn’t show them what they did wrong or what they’re supposed to do instead. All it does is cause confusion. If you’ve ever seen a dog get really into a game of tug, it’s easy to see how this dog myth got started. Some dogs get so excited that they growl and pull with all their strength. Tug-of-war can sometimes make a dog sound aggressive, and some people think playing this game can actually encourage aggressive behavior in everyday life.
Canine behaviorists have debunked this myth, however, saying the game of tug is a healthy way for dogs to exercise their bodies and minds. That growling that you sometimes hear typically has nothing to do with a dog being aggressive. Dogs have a different type of growl that they use when they’re having fun. Playing tug is a great way to play one-on-one with your dog, and it can reinforce your friendship.
Do you have any dog myths to add to the list? Let us know in the comments!
Do you know why dogs bark at strangers? Click here to find out. This website uses cookies to improve your experience while you navigate through the website. Out of these, the cookies that are categorized as necessary are stored on your browser as they are essential for the working of basic functionalities of the website. We also use third-party cookies that help us analyze and understand how you use this website. These cookies will be stored in your browser only with your consent. You also have the option to opt-out of these cookies. But opting out of some of these cookies may affect your browsing experience.
Necessary Always Enabled
Necessary cookies are absolutely essential for the website to function properly. These cookies ensure basic functionalities and security features of the website, anonymously.
Functional
Functional cookies help to perform certain functionalities like sharing the content of the website on social media platforms, collect feedbacks, and other third-party features.
Performance
Performance cookies are used to understand and analyze the key performance indexes of the website which helps in delivering a better user experience for the visitors.
Analytics
Analytical cookies are used to understand how visitors interact with the website. These cookies help provide information on metrics the number of visitors, bounce rate, traffic source, etc.
Advertisement
Advertisement cookies are used to provide visitors with relevant ads and marketing campaigns. These cookies track visitors across websites and collect information to provide customized ads.
Others
Other uncategorized cookies are those that are being analyzed and have not been classified into a category as yet.
SAVE & ACCEPT
Home » 10 Dog Myths We Wish People Would Stop Believing