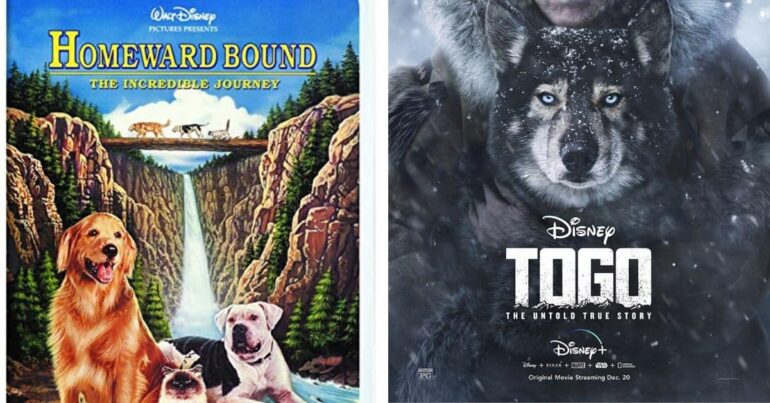 Grab the popcorn and your pup—it’s movie night!

It doesn’t matter if you’re into comedy, action, or romance. There’s literally a dog movie out there for everyone. And do you know what the best part is? Staying in to watch a movie with your dog is a great way to strengthen your relationship.
There are hundreds of movies that feature our favorite furry friends, but there will always be some that stand out more than others. From yesterday to today, here’s a ranking of our all-time favorite dog movies.

This 1989 classic is about an uptight detective (Turner) who finds himself responsible for a very large-and-in-charge dog (Hooch). The duo works together to solve a murder, and they each learn a lot about life in the process. No matter how many times I’ve seen it, the ending to this movie gets me every time.
This movie is also one of the only films to star a Dogue de Bordeaux–one of the largest and strongest dog breeds in the world.

Released in 2000 but set in the 1940s, My Dog, Skip is one of those coming of age stories that will seriously tug at your heartstrings. It’s all about how a boy and his dog navigate the trials of life.
A young Frankie Muniz stars in the leading role, and two Jack Russel Terriers take turns playing his best friend. The two dogs, Moose and Enzo, were actually father and son. The whole movie is a celebration of what it really means to bond with a beloved dog.

The immediate success of the original Beethoven prompted produces to turn out an additional seven films centered around the life of a slobbery Saint Bernard. They’re all pretty good, but for this list, we’re talking about the first movie released in 1992.
Beethoven was so successful, there’s hardly a person over 20 years old that can look at a Saint Bernard and not think of the Newton family’s mischievous gentle giant. This movie reminds us all how dogs truly can change your life.

The newest dog movie on this list, Togo is a movie that’s long overdue. It’s the true story of how a sled dog named Togo braved insanely harsh conditions to bring much-needed medicine to the town of Nome, Alaska. If you’re thinking this plot sounds a lot like another famous dog movie, Balto, you’d be right. Not to insult all the Balto fans out there (I’ve seen that movie at least 100 times), but Togo is the dog that did the real work during that epic 1935 serum run.
Unlike Balto, Togo is live action. Willem Dafoe plays renowned dog musher Leonhard Seppala, and the PG-rated drama is an incredible tale of extreme bravery and unyielding loyalty.

We’re going back in time a bit for the next movie on this list. Benji was filmed in 1974, but a recent Netflix remake reminds us it’s a timeless classic. The story follows an adorable mixed breed dog named Benji as he fights for the people he loves.
The original movie is also one of the first live-action dog films to be told from the dog’s perspective. It’s the type of movie that will instantly put you in a good mood.

I have to warn you about this one. Do not, I repeat, DO NOT, watch Marley & Me until you’ve tracked down an entire box of tissues. That’s right, a single tissue just won’t do it.
This dog movie made in the late 2000s follows the life of a mischievous yellow Lab as he turns life upside down for his owners (played by Owen Wilson and Jennifer Aniston). But despite all the trouble, Marley changes their lives in a way they never expected.

4. All Dogs Go To Heaven

All Dogs Go To Heaven is technically a children’s movie, but I’d argue it’s great for dog lovers of all ages. It features some pretty intense themes including death, revenge, and unconditional love.
If you haven’t seen it, the movie follows Charlie B. Barkin, a German Shepherd, as he dies and then returns from Heaven to get his revenge. But in the process, he falls in love with a little orphan girl, and his plans get derailed. It’s a little dark in places, but the overall message of this movie is all about hope.

Released in 2017, Megan Leavey is the true story of a young Marine and her relationship with a working military dog named Rex. It gives glimpses of what life was like for deployed military personnel in Iraq and the complicated relationships between the working K9s and their handlers.
Rex saves Megan’s life in more ways than one, and when she gets the opportunity to do the same for him, she does everything to make that happen.

Hachi: A Dog’s Tale is a remake for the 1987 Japanese film, Hachikō Monogatari. Both movies depict the true story of the incredible relationship between a man and his dog. The dog, an Akita named Hachi, shows incredible loyalty throughout the entire movie.
I won’t give any spoilers, but every dog lover needs to watch this movie at least once in their lives. You’ll probably cry your eyes out, but it’ll also give you an even greater understanding of how powerful the bond between human and canine can really be.

Last, but not least, we have Homeward Bound: The Incredible Journey. Based on a book, this adventures/comedy brings me to tears every single time I watch it. Even though I know how it ends, the story of how Chance, Shadow, and Sassy risk everything to be with their family hits me right in the feels.
One of the best things about this dog movie is that it’s great regardless of age. It’s a timeless classic that will likely live on for several more generations.
If you haven’t seen these dog movies yet, what are you waiting for? And if you’ve seen them a hundred times, there’s something about a good dog movie that just never gets old.
What movies did we miss? Let us know your favorite dog movies in the comments!

This website uses cookies to improve your experience while you navigate through the website. Out of these, the cookies that are categorized as necessary are stored on your browser as they are essential for the working of basic functionalities of the website. We also use third-party cookies that help us analyze and understand how you use this website. These cookies will be stored in your browser only with your consent. You also have the option to opt-out of these cookies. But opting out of some of these cookies may affect your browsing experience.
Necessary Always Enabled
Necessary cookies are absolutely essential for the website to function properly. These cookies ensure basic functionalities and security features of the website, anonymously.
Functional
Functional cookies help to perform certain functionalities like sharing the content of the website on social media platforms, collect feedbacks, and other third-party features.
Performance
Performance cookies are used to understand and analyze the key performance indexes of the website which helps in delivering a better user experience for the visitors.
Analytics
Analytical cookies are used to understand how visitors interact with the website. These cookies help provide information on metrics the number of visitors, bounce rate, traffic source, etc.
Advertisement
Advertisement cookies are used to provide visitors with relevant ads and marketing campaigns. These cookies track visitors across websites and collect information to provide customized ads.
Others
Other uncategorized cookies are those that are being analyzed and have not been classified into a category as yet.
SAVE & ACCEPT
Home » 10 Best Dog Movies Everyone Needs To See