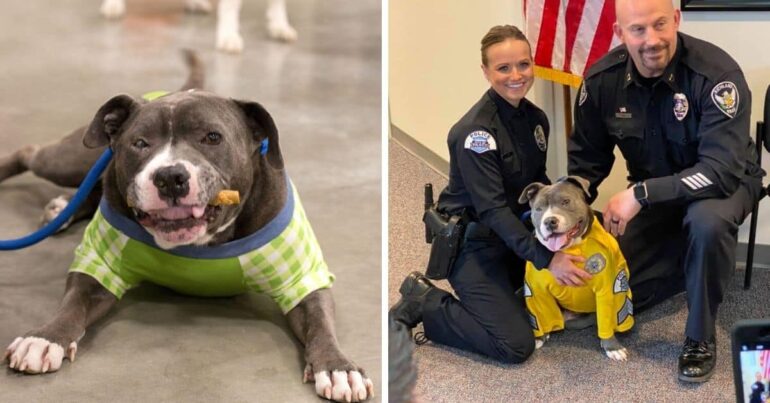 With only a few months to live, a rescue pit bull named Eddie is finally getting the love he has always deserved. He was recently diagnosed with an inoperable brain tumor, but his friends at Mikey’s Chance Canine Rescue want his final days to be more than perfect. To make that happen, they created a bucket list full of things Eddie would love to do. He’s busy accomplishing those goals, and he’s getting help from some pretty high-up places. The Pasco Police Department in Washington recently made this sweet boy an honorary K9.

According to Mikey’s Chance Canine Rescue, an animal control officer found Eddie in October. He ended up at the non-profit rescue organization, and they had every intention of finding him a new home.

But then a vet visit uncovered the heartbreaking truth.

When Eddie was first brought to the shelter, rescuers noticed his eye was partially closed, and he seemed unsteady on his feet. Upon examination, a veterinarian discovered those signs were actually symptoms of a tumor on the right side of his brain. The tumor cannot be removed, and Eddie’s vet predicts he has about six months to live–although it could be longer. Eddie’s diagnosis is terminal, but his rescuers aren’t giving up. They’re doing everything they can to keep him happy and comfortable, and that includes a loving foster home.

Eddie’s foster family says that even with his illness, Eddie is a happy, friendly dog. He enjoys all kinds of treats and can’t resist a good squeaky toy. He likely doesn’t realize he’s sick, and his friends want to keep it that way.

After his former family abandoned him, everyone agrees that Eddie deserves to live whatever time he has left to the fullest.

To make that happen, his foster created a bucket list. Some of the items on that list include a spa day, riding in a convertible, and going to a baseball game. He still has quite a few experiences to check off, but the community has rallied to make those goals come true.

Most recently, Eddie spent the day with the Pasco Police Department. Officers officially swore him in as an honorary K9, and he dressed in an official K9 uniform.
But instead of taking down bad guys, this sweet pit bull spent the day making friends at PetSmart and eating ice cream. Everywhere he went, fans gathered around to wish him well. It was a wonderful day full of love and appreciation for a deserving dog.

Eddie’s foster and friends from the rescue are determined to fulfill all the items on his bucket list. Their number one priority, however, is making sure Eddie is comfortable and free of pain. As long as he is happy, they will continue to make his life the best it can be.
If you think you can help Eddie fulfill a bucket list item, contact Mikey’s Chance Canine Rescue!

This website uses cookies to improve your experience while you navigate through the website. Out of these, the cookies that are categorized as necessary are stored on your browser as they are essential for the working of basic functionalities of the website. We also use third-party cookies that help us analyze and understand how you use this website. These cookies will be stored in your browser only with your consent. You also have the option to opt-out of these cookies. But opting out of some of these cookies may affect your browsing experience.
Necessary Always Enabled
Necessary cookies are absolutely essential for the website to function properly. These cookies ensure basic functionalities and security features of the website, anonymously.
Functional
Functional cookies help to perform certain functionalities like sharing the content of the website on social media platforms, collect feedbacks, and other third-party features.
Performance
Performance cookies are used to understand and analyze the key performance indexes of the website which helps in delivering a better user experience for the visitors.
Analytics
Analytical cookies are used to understand how visitors interact with the website. These cookies help provide information on metrics the number of visitors, bounce rate, traffic source, etc.
Advertisement
Advertisement cookies are used to provide visitors with relevant ads and marketing campaigns. These cookies track visitors across websites and collect information to provide customized ads.
Others
Other uncategorized cookies are those that are being analyzed and have not been classified into a category as yet.
SAVE & ACCEPT
Home » Terminally Ill Pit Bull Becomes Honorary K9 As He Fulfills His Final Bucket List