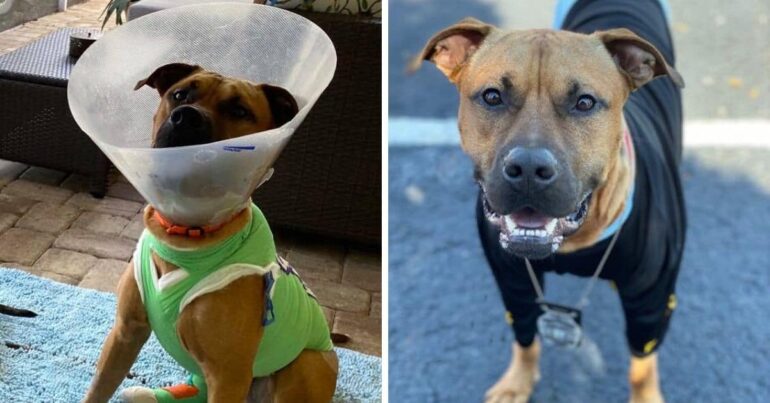 Through it all, Jeffery never lost his kind spirit.

Pictures of Jeffery from two months ago are not pretty. The rescued Rhodesian Ridgeback mix was picked up by Suncoast Animal League in Palm Harbor, FL with severe burns covering his back. Vets don’t know for sure, but they suspect someone poured a boiling liquid over Jeffery’s shoulders, and the dog was left to suffer on his own. Despite his horrific injuries, tragic past, and low chance of recovery, this Florida rescue dog is an inspiration. He fought hard for his survival, and now he’s being celebrated as an honorary police K9.

Jeffery’s story starts long before he was found burned and in pain.

We’ll never know the details, but a patchwork of old scars and poorly healed injuries tells a story of abuse and neglect. Suncoast Animal League traveled hours to pick him up after he was found on the side of the road badly injured. Dr. Lee of BluePearl Pet Hospital set to work making him comfortable and trying to learn the extent of his wounds.
While it’s impossible to know for sure if a human is responsible for Jeffery’s pain, Dr. Lee suspects someone poured either a boiling liquid or a chemical over Jeffery’s back, and he suffered additional injuries and burns when he ran away. All of that was on top of several older cuts, scabs and lacerations. As heartbreaking as his burns were, it was worse knowing this wasn’t the first time Jeffery had been in pain. His life was likely full of pain and trauma, but rescuers hoped it wasn’t too late to help.
The first part of Jeffery’s recovery was surgery to remove burned skin. He was in excruciating pain, and Dr. Lee administered pain medications to keep him comfortable. While the burns themselves were bad, the vet’s biggest concern was a growing infection.  The infected wound was on its way to causing systemic sepsis, and Jeffery needed around-the-clock care.
Click here to see a graphic photo of Jeffery’s recovery progress.

With the extreme pain and an obvious history of trauma, it would have been normal for Jeffery to be afraid of his human rescuers. Dr. Lee and her team expected the big dog to lash out in attempts to protect himself, or at the very least, they thought he would cower or growl. Humans failed him in the past, but somehow, this burned rescue dog was kind and trusting. He let his rescuers pet his head and the vets perform their exams.

Despite everything, he seemed to trust those humans with his life.

It took weeks for Jeffery’s injuries to heal. He needed regular bandage changes and took medications four times a day. He lived in a cone and wore clothing to protect his sensitive skin. Thanks to his foster mom, he spent his recovery in a caring home. The lovable dog met his best friend, a fellow rescue and burn survivor named Denali, and the two of them enjoy getting into mischief and doling out love.

Throughout the entire healing process, Jeffrey never wavered. The cone was uncomfortable and bandage changes were painful, but the big rescue dog gave out nothing but love and kisses. Suncoast Animal League posted about Jeffery on Facebook, and it wasn’t long until the inspirational dog became a local celebrity. Everywhere he went, Jeffery showcased kindness and forgiveness. He attended events and met with the community to spread awareness for the importance of animal rescue and adoption.

Now that Jeffery’s burns have turned to scars, he’s a happy and healthy rescue dog. He enjoys playing with his canine buddies and cuddling with humans. To celebrate his amazing spirit and recovery, Port Richey Police Department has made the rescue dog an honorary K9. The community recognized him during an official ceremony and collected supplies to donate to other rescue animals. Sergeant Alu swore him in, and Jeffery will continue to represent his community and inspire others to never give up on health or happiness.
According to Jeffery’s foster mom, he will be ready to be adopted in the next few weeks. He’s looking for a home with a fenced in yard and another dog to be his buddy. Contact the shelter to learn more about him!
Follow Suncoast Animal League on Facebook for more updates on Jeffery.

This website uses cookies to improve your experience while you navigate through the website. Out of these, the cookies that are categorized as necessary are stored on your browser as they are essential for the working of basic functionalities of the website. We also use third-party cookies that help us analyze and understand how you use this website. These cookies will be stored in your browser only with your consent. You also have the option to opt-out of these cookies. But opting out of some of these cookies may affect your browsing experience.
Necessary Always Enabled
Necessary cookies are absolutely essential for the website to function properly. These cookies ensure basic functionalities and security features of the website, anonymously.
Functional
Functional cookies help to perform certain functionalities like sharing the content of the website on social media platforms, collect feedbacks, and other third-party features.
Performance
Performance cookies are used to understand and analyze the key performance indexes of the website which helps in delivering a better user experience for the visitors.
Analytics
Analytical cookies are used to understand how visitors interact with the website. These cookies help provide information on metrics the number of visitors, bounce rate, traffic source, etc.
Advertisement
Advertisement cookies are used to provide visitors with relevant ads and marketing campaigns. These cookies track visitors across websites and collect information to provide customized ads.
Others
Other uncategorized cookies are those that are being analyzed and have not been classified into a category as yet.
SAVE & ACCEPT
Home » Severely Burned Rescue Dog Survives To Become Honorary Police K9