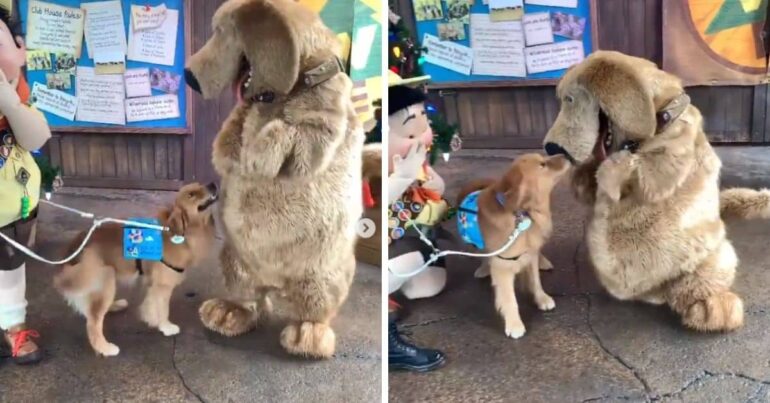 Two-year-old Henry has an important job to do. He’s a service dog and travels with his mom, Jessica Paulsen, everywhere she goes. He regularly goes on trips to the grocery store and occasionally the arcade, but his best-yet adventure happened at the happiest place on Earth—Disney World!

According to Jessica’s website, she has a condition called postural orthostatic tachycardia syndrome. It causes symptoms including fainting and rapid heart rate, and Henry has been training to alert to these symptoms since he was eight weeks old. Jessica and Henry are a team, so when Jessica planned a trip to Disney World’s Animal Kingdom, it was obvious that Henry would go too.
Jessica has posted several adorable pictures of the trip on Henry’s Instagram account. The service dog posed in front of the castle and wore his very own mouse ears, but even all that cuteness doesn’t compare to the moment when Henry met Dug from the animated movie, “Up.”
If it’s been a few years since you’ve seen the movie (or *gasp* you’ve never seen it all), let me refresh your memory. Dug is the goofy talking dog who is impossible not to love. He gets distracted by squirrels and is a very good tracker. So when Henry met the real-life Dug at Disney World, he could hardly contain his excitement.

Meet Wiley: The Adventurous Dalmatian Who Wears His Heart On His Nose

As a professional working dog, Henry kept his cool as much as could be expected. He ran up to Dug with his tail wagging and tongue lolling. He also greeted Russel, but it was obvious he was most in love with Dug. Henry ended up posing between Dug and Russel for a few photos. He looked like he was having the time of his life.
Jessica said on Instagram,

“Please note that Henry is a working dog but Disney days are long and character meets are a great reward for all of Henry’s hard work.”

We can practically hear the Internet let out a collective “awwwwww!” while watching this cute video. And this isn’t the first time Henry has been in the spotlight. He has 118,000 followers on Instagram and even has his own book about his journey to becoming a service dog.
Check out his Instagram for more cute pics!

This website uses cookies to improve your experience while you navigate through the website. Out of these, the cookies that are categorized as necessary are stored on your browser as they are essential for the working of basic functionalities of the website. We also use third-party cookies that help us analyze and understand how you use this website. These cookies will be stored in your browser only with your consent. You also have the option to opt-out of these cookies. But opting out of some of these cookies may affect your browsing experience.
Necessary Always Enabled
Necessary cookies are absolutely essential for the website to function properly. These cookies ensure basic functionalities and security features of the website, anonymously.
Functional
Functional cookies help to perform certain functionalities like sharing the content of the website on social media platforms, collect feedbacks, and other third-party features.
Performance
Performance cookies are used to understand and analyze the key performance indexes of the website which helps in delivering a better user experience for the visitors.
Analytics
Analytical cookies are used to understand how visitors interact with the website. These cookies help provide information on metrics the number of visitors, bounce rate, traffic source, etc.
Advertisement
Advertisement cookies are used to provide visitors with relevant ads and marketing campaigns. These cookies track visitors across websites and collect information to provide customized ads.
Others
Other uncategorized cookies are those that are being analyzed and have not been classified into a category as yet.
SAVE & ACCEPT
Home » Service Dog Can’t Contain His Excitement When He Meets Dug From ‘Up’