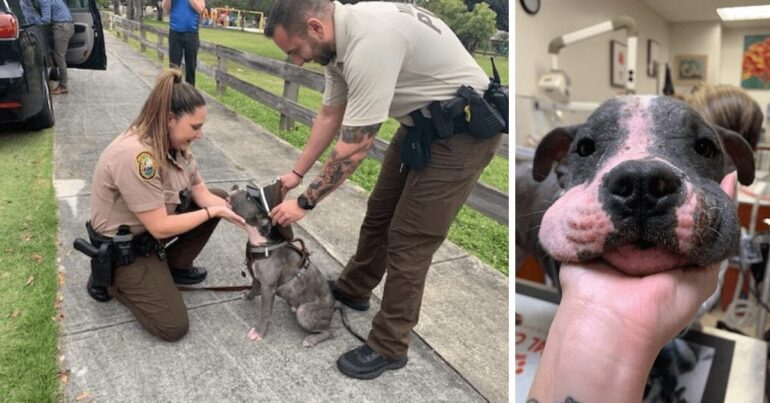 At only six months old, a puppy later named Kingsley already knew what it was like to feel scared, abandoned, and hurt. He was left extremely sick and tied up in a Florida park when Miami-Dade police officers found him and assumed he was dead. But despite how bad he looked, Kingsley proved to be a fighter. He was rescued and nursed back to health, and now the tough little pup has his very own happy ending.

When Officer Lauren Garcia first found Kingsley, he was hiding under a bush and covered in skin sores and scabs. It was obvious he had a serious skin condition, his head was painfully swollen, and a rope was tied so tightly around his neck, it was cutting into his skin. It was obvious the sick puppy needed help. Luckily for Kingsley, he was found by the exact right person.
Officer Garcia took the dog to Miami-Dade Animal Services where he was later taken in by a local rescue group called Humans and Animals United. While the rescuers were already busy with a different rescue, they couldn’t say no to helping Kingsley in every way they could.
Extremely dehydrated and anemic, Kingsley almost needed a blood transfusion to survive. He required three weeks of extensive care while a dedicated team of veterinarians and vet techs worked to heal his skin and slowly bring him back to life.

With each day, Kingsley got stronger. He started to look and act like the adorable puppy he should have been all along. The only thing he was missing was a loving home.
With his story of survival and adorable face, Kingsley made people fall in love everywhere he went. He received two separate adoption inquiries, one from a vet tech who cared for him for weeks, and the other from the police officer who first saved his life. After talking it over with Humans and Animals United, it was decided that Officer Garcia would have the honor of officially adopting the puppy she saved. At the same time, the caring vet tech turned into what is bound to be a life-long friend.

F2 Goldendoodle: Everything You Need to Know

Now that he’s fully recovered, Kingsley is living the life with his new mom. He’ll hopefully forget all about the cruel humans who left him to die, and he’ll enjoy a lifetime of love with someone who truly cares.
All images via Facebook/Humans and Animals United

This website uses cookies to improve your experience while you navigate through the website. Out of these, the cookies that are categorized as necessary are stored on your browser as they are essential for the working of basic functionalities of the website. We also use third-party cookies that help us analyze and understand how you use this website. These cookies will be stored in your browser only with your consent. You also have the option to opt-out of these cookies. But opting out of some of these cookies may affect your browsing experience.
Necessary Always Enabled
Necessary cookies are absolutely essential for the website to function properly. These cookies ensure basic functionalities and security features of the website, anonymously.
Functional
Functional cookies help to perform certain functionalities like sharing the content of the website on social media platforms, collect feedbacks, and other third-party features.
Performance
Performance cookies are used to understand and analyze the key performance indexes of the website which helps in delivering a better user experience for the visitors.
Analytics
Analytical cookies are used to understand how visitors interact with the website. These cookies help provide information on metrics the number of visitors, bounce rate, traffic source, etc.
Advertisement
Advertisement cookies are used to provide visitors with relevant ads and marketing campaigns. These cookies track visitors across websites and collect information to provide customized ads.
Others
Other uncategorized cookies are those that are being analyzed and have not been classified into a category as yet.
SAVE & ACCEPT
Home » Rescued Puppy Finds Home With Police Officer Who Saved His Life