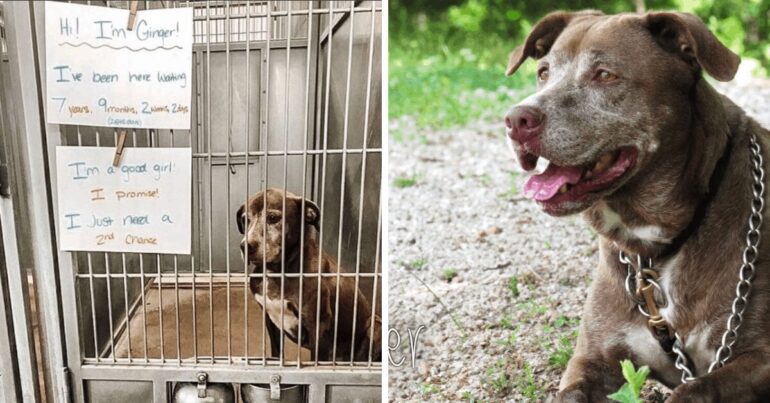 A Missouri animal shelter is celebrating a happily ever after for one of their special rescue dogs. Nine-year-old Ginger has lived at Dogwood Animal Shelter for almost her entire life. She watched as other dogs found their families, but no one seemed to be the right match for the lovable lab mix. That was until a social media post went viral.

Thanks to an outpouring of nationwide support, Ginger finally has the home she deserves.

Facebook
Seven years ago, rescuers saved Ginger from an abusive situation. According to the shelter, her traumatic experience led to serious “medical, emotional, and behavioral issues.” She wasn’t ready for adoption, so her dedicated rescuers spent necessary time training Ginger and helping her forget her painful past.
The lab mix successfully completed her training, but she still struggled to attract the right attention. She needed to find a home where she was the only pet, and it was also recommended that she live somewhere with no small children. That criteria seriously limited her options. With each passing year, Ginger’s chances of getting adopted dwindled.

As a no-kill shelter, Dogwood Animal Shelter refused to give up.

Shelter staff and volunteers were committed to being Ginger’s safe haven, but they also believed her perfect person was out there. All they needed to do was find them.

Instagram
On Tuesday, the shelter posted a photo of Ginger online. It showed the senior lab mix in her kennel behind a sign that said,

That image quickly gained traction. By Friday, the shelter made the announcement hundreds of thousands of people were waiting for.

11 Fun Indoor Things to Do With Your Malshi

According to Facebook, Ginger found the perfect home with the perfect person. Her new family has no children and no other pets. They even have a fenced-in yard and experience with dogs similar to Ginger.

Ginger’s happy ending is an example of the true good that people can accomplish when they work together.

Thousands of people shared Ginger’s photo across Facebook, Instagram, and Twitter. It eventually made its way to Mission Driven Goods, an account that helps long-term shelter pets and an account launched by Ellen DeGeneres called Paws Up.
With all that national attention, Dogwood Animal Shelter received multiple applications for the lab mix. They sorted through the potential adopters and found Ginger’s best match.
By the time they posted a photo of sweet Ginger with her new human, thousands of people knew Ginger’s story. People came together to make life better for one long-term rescue dog, and we’re thrilled to see Ginger benefiting from the power of social media.
Do you love rescue dogs? Read about this shelter dog turned K9 officer next!

This website uses cookies to improve your experience while you navigate through the website. Out of these, the cookies that are categorized as necessary are stored on your browser as they are essential for the working of basic functionalities of the website. We also use third-party cookies that help us analyze and understand how you use this website. These cookies will be stored in your browser only with your consent. You also have the option to opt-out of these cookies. But opting out of some of these cookies may affect your browsing experience.
Necessary Always Enabled
Necessary cookies are absolutely essential for the website to function properly. These cookies ensure basic functionalities and security features of the website, anonymously.
Functional
Functional cookies help to perform certain functionalities like sharing the content of the website on social media platforms, collect feedbacks, and other third-party features.
Performance
Performance cookies are used to understand and analyze the key performance indexes of the website which helps in delivering a better user experience for the visitors.
Analytics
Analytical cookies are used to understand how visitors interact with the website. These cookies help provide information on metrics the number of visitors, bounce rate, traffic source, etc.
Advertisement
Advertisement cookies are used to provide visitors with relevant ads and marketing campaigns. These cookies track visitors across websites and collect information to provide customized ads.
Others
Other uncategorized cookies are those that are being analyzed and have not been classified into a category as yet.
SAVE & ACCEPT
Home » Thousands Of People Helped This Rescued Lab Mix Find A Home After 7 Years In A Shelter