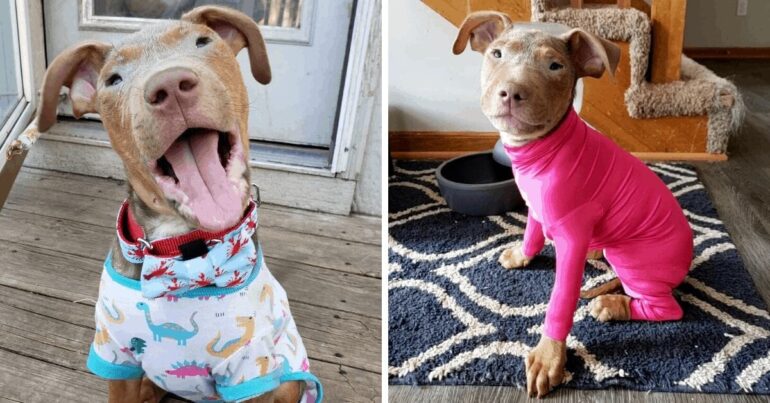 When a litter of five puppies came to KC Pet Project in Kansas City, it didn’t take long for four of those adorable babies to find new homes. They were happy and playful, and everything you’d expect adorable puppies to be. Puppy number five, however, was a little different.
Diagnosed with a rare condition called Ehlers-Danlos syndrome, this puppy’s future wasn’t as secure as his siblings’. We’re happy to report, however, that the adorable little guy named Jack has officially been adopted into the absolutely perfect family. Everyone in the family has the same medical condition he has, and they’re already making each other oh-so happy.

KC Pet Project’s chief communications officer, Tori Fugate, told BarkSpot that rescuers first noticed Jack was different when ordinary playtime resulted in minor injuries. She told us that Jack would be playing in the yard, and a small stick would rip his skin open. Or if he itched himself with his nails, he would end up bleeding.
Unsure what was going on, Jack’s friends at the shelter got him some protective clothing. That protection came in the form of children’s pajamas, and I think we can all agree on how adorable he looks!

It took several rounds of tests for the shelter’s veterinary team to get to the bottom of Jack’s mystery. Eventually, they narrowed down the possibility to a rare condition called Ehlers-Danlos syndrome.
Found in both humans and dogs, EDS is a group of disorders that affects the skin, bones, blood vessels, and sometimes other organs. There are multiple types of EDS, and it is most often characterized by having tissue fragility, stretchy skin, and joints that can stretch further than normal. For Jack, this means the smallest cut could turn into a serious injury.
Determined to give Jack the best life possible, his foster family connected with an EDS support group. They were looking for advice and suggestions for his care, but they ended up finding a whole lot more.

The post caught the attention of one family in particular. Everyone in the family has EDS, and they knew they would be perfectly capable of meeting Jack’s special needs. It was like fate brought them together, and now Jack is loving life in his perfect new family.
Jack will grow up in a home that understands his condition better than anyone else. He will live a full life of puppy fun, adventures, and lots of love.
His new family has promised to make him an Instagram account, and we can’t wait to see this special pup live his best life with his new best friends.

This website uses cookies to improve your experience while you navigate through the website. Out of these, the cookies that are categorized as necessary are stored on your browser as they are essential for the working of basic functionalities of the website. We also use third-party cookies that help us analyze and understand how you use this website. These cookies will be stored in your browser only with your consent. You also have the option to opt-out of these cookies. But opting out of some of these cookies may affect your browsing experience.
Necessary Always Enabled
Necessary cookies are absolutely essential for the website to function properly. These cookies ensure basic functionalities and security features of the website, anonymously.
Functional
Functional cookies help to perform certain functionalities like sharing the content of the website on social media platforms, collect feedbacks, and other third-party features.
Performance
Performance cookies are used to understand and analyze the key performance indexes of the website which helps in delivering a better user experience for the visitors.
Analytics
Analytical cookies are used to understand how visitors interact with the website. These cookies help provide information on metrics the number of visitors, bounce rate, traffic source, etc.
Advertisement
Advertisement cookies are used to provide visitors with relevant ads and marketing campaigns. These cookies track visitors across websites and collect information to provide customized ads.
Others
Other uncategorized cookies are those that are being analyzed and have not been classified into a category as yet.
SAVE & ACCEPT
Home » Rescue Puppy With Rare Skin Condition Finds The Absolute Perfect Family