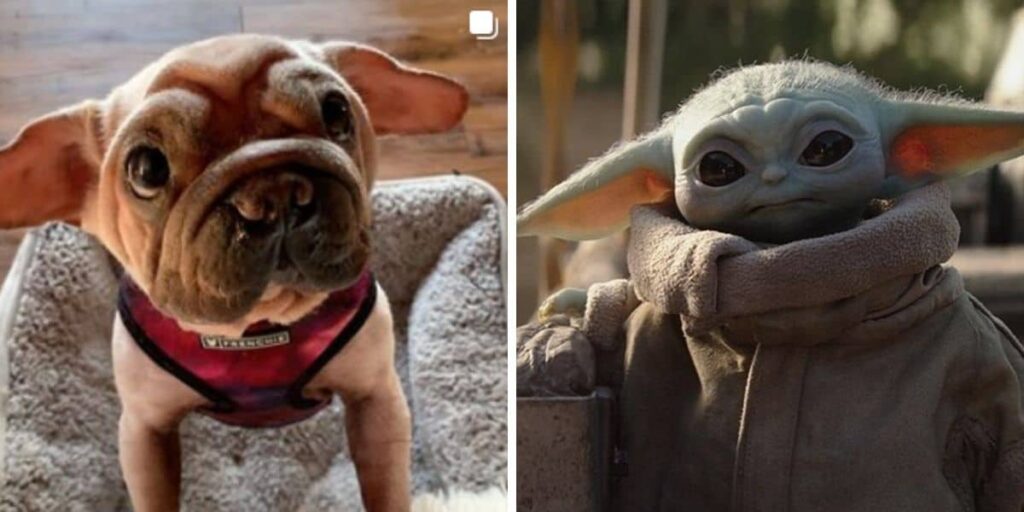 You don’t need to be a Star Wars fan to know who Baby Yoda is.

The little green alien has basically taken over the Internet.  I admit that I know literally nothing about the character besides that it’s from the Disney+ series “The Mandalorian”—and the fact it makes for some pretty hilarious memes. But out of all the Baby Yoda content flooding my newsfeed these days, this one is my favorite. A rescue dog named Mork Skywalker has been given the moniker ‘Baby Yoda Dog’ by the social media masses.
His recent fame has a lot to do with his unique looks, but this dog has a story that everyone should hear.
https://www.instagram.com/p/B6I_ONTg3Jp/

Mork was rescued in China by HarbinSHS Animal Rescue, an organization that focuses on rescuing dogs on their way to the meat trade. In remote areas of China, and several other Asian countries, dog meat is considered a delicacy. It’s sold in restaurants, and that practice is backed up by a profitable dog meat trade. Some dogs are bred for the meat industry and live their entire lives in deplorable conditions. They’re crammed into tiny crates and given the bare minimum attention until they’re sold and killed. Other dogs are stolen right from their homes and sold to dog meat traders. It’s an industry marked with heartache and cruelty.
For too many dogs, there is no rescue or happy ending. But HarbinSHS is doing everything they can to change that. In October 2019, they thankfully intercepted a group of dogs that were on their way to the meat industry. One of those dogs was Mork.
https://www.instagram.com/p/B6vmedlnGzx/
All kinds of dogs end up in the Chinese meat trade. There are purebred dogs, mixed dogs, large dogs, and small dogs. Some dogs are completely healthy, and some are sickly. Mork is an example of a dog that wasn’t bred specifically for the meat trade, but circumstance put him in danger.

A Unique Dog In A Common Situation

No one knows for sure, but it’s believed that Mork is a product of some form of intentional breeding. But instead of breeding dogs based on breed standards or health, Mork was most likely bred to look a certain way. With no regards to the health of the puppies, this kind of irresponsible breeding is why Mork looks like he could be Baby Yoda’s twin. It’s also why he faces a long list of health concerns.
Nikki Carvey, founder of Los Angeles rescue Road Dogs and Rescue, learned about Mork and the other rescued dogs and knew she had to help. Her nonprofit animal rescue specializes in saving special needs bulldogs. Many of the dogs in their care have spina bifida or paralysis. So when she saw Mork, she did what was needed to bring the Baby Yoda dog to safety.
https://www.instagram.com/p/B6oN-16H_Z1/
There’s no doubt that Mork is cute in a alien-like way. He doesn’t have Yoda’s green skin, but the over-sized eyes and big, sideways-pointing ears give him a look that’s unique from other dogs. The problem is, those physical features come with internal health issues that put his life in danger. Carvey said on Instagram,

“We all love Mork because he is so bloody cute. But he is a mess. Internal issues, possible hiatal hernia, possible heart issues, breathing and palate issues. A dog should never be bred to be different or cute. It should always be about health.”

Mork was hospitalized when he was first rescued and needed to gain strength before his trip to LA. He was seriously underweight, and digestive issues limit what he can eat. Now that he’s safe in Carvey’s care, she dedicates large amounts of time and money to save his life.
To help him grow, Mork needs four small meals a day. But those meals aren’t as easy as scooping dog food into a bowl. Due to his irritable bowel syndrome, his meals are a mix of fresh lentils and various supplements. He’s slowly gaining weight, but he has a long way to go.
Besides digestive issues, Mork also has trouble breathing. Watch a video of the cute Baby Yoda dog, and you’re bound to notice his adorable snuffle sounds. But while those puppy noises are cute, they’re a sign of respiratory difficulty. Carvey said,

“While his snorts may sound cute, let’s remember it’s due to having issues with his nose and palate and our goal is for him to have surgery as soon as he is healthy enough. He deserves to breathe well.”

Watch this video with the sound on to hear Mork’s breathing.

https://www.instagram.com/p/B60sQd_nF0A/
After narrowly avoiding the dog meat trade, every day is a fight to keep Mork alive and well. Carvey is appreciative of the online attention the unique-looking rescue dog has brought to her nonprofit, but she emphasizes the fact that Mork should be a cautionary tale.
Many people are curious to know what combination of dog breeds was used to create this Baby Yoga dog. They’ve suggested a dog DNA test, but Carvey says that will never happen.

“I don’t want people to replicate him and breed him. He’s got so many congenital issues. He’s got an undershot jaw, and he can’t breathe very well.  He’ll have surgery to help him breathe. The last thing I want people to do is re-create Mork because he is ‘cute.'”

Since the Internet has gotten hold of Mork’s story, he’s been happily adopted and has earned an impressive 50,000 followers on Instagram. Carvey hopes to use that platform to educate people about the dog meat trade along with the dangers of irresponsible dog breeding.
Click here to check out Mork’s Instagram.

Which Movie Dog Would Be Your Ideal Sidekick?

Signs Your Rescue Dog Came From An Abusive Home