Adorable Police Puppy Reports For First Day On The Job 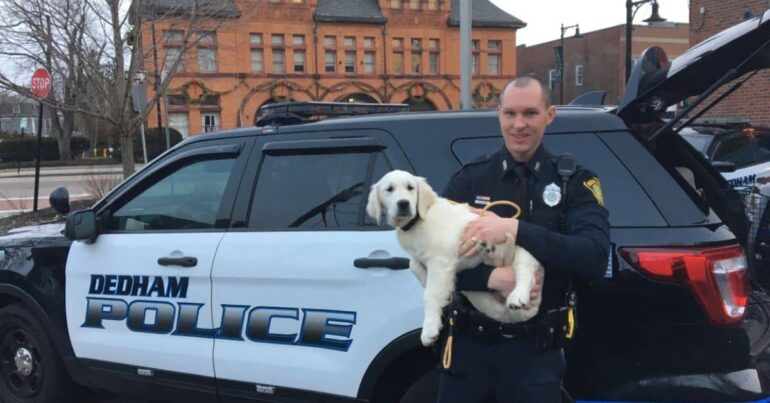 A Massachusetts police department just got a whole lot fluffier–not to mention cuter. The currently unnamed English Cream Golden Retriever joined the Dedham Police Department as an official member of the team. The cute police puppy recently reported for his first day on the job, and he already has a knack for making his community a better place.

Facebook
The puppy’s official role within the department will be “Community Resource Dog.” He won’t be sniffing out drugs or taking down bad guys, but he has an equally important job to do. The department plans to train their new police puppy to be a community liaison. He will visit schools and community events as a way to connect with the public and provide comfort. The puppy will also support school resource officers as they interact with children in crisis.
There’s something about the presence of a friendly dog that can diffuse almost any situation. Talking with a police officer can be intimidating, but most people find the warmth of a dog’s fur to be soothing. When children are too scared or shy to talk to the officers, they can direct their thoughts to the dog. And when someone is feeling lonely or sad, a wagging tail and a dog’s love can be the best way to help.

The police department received the puppy as part of a grant intended to facilitate better community relations.

First day on the job. Our Community Resource Dog checked in at the police station this morning prior to heading out to training to learn how to serve our community. #GOFIDOG. Thanks DA Morrissey. pic.twitter.com/ouGSRnRcWc

” This dog represents a new means to help de-escalate situations, engage with vulnerable and withdrawn members of the community, interact with community members suffering from mental health or stress issues, comfort victims and witnesses of violence and promote police-community engagement.”

The Dedham police puppy isn’t quite ready to get to work full-time, but his first day on the job was a big success. The police department posted pictures of the puppy’s first day on social media, and the officers were all smiles. The little guy was given a grand tour of the station where he met plenty of new friends. With the introductions out of the way, the young pup headed out for his first on-the-job training. He’ll spend several weeks learning how he can best serve his community. He has a lot to learn, but he sure looks like a natural when it comes to making people smile.

Facebook
The police puppy doesn’t have a name yet, but students at Dedham Middle School are getting ready to vote. The entire community is looking forward to seeing how their new police puppy will make their town a better place.

This website uses cookies to improve your experience while you navigate through the website. Out of these, the cookies that are categorized as necessary are stored on your browser as they are essential for the working of basic functionalities of the website. We also use third-party cookies that help us analyze and understand how you use this website. These cookies will be stored in your browser only with your consent. You also have the option to opt-out of these cookies. But opting out of some of these cookies may affect your browsing experience.
Necessary Always Enabled
Necessary cookies are absolutely essential for the website to function properly. These cookies ensure basic functionalities and security features of the website, anonymously.
Functional
Functional cookies help to perform certain functionalities like sharing the content of the website on social media platforms, collect feedbacks, and other third-party features.
Performance
Performance cookies are used to understand and analyze the key performance indexes of the website which helps in delivering a better user experience for the visitors.
Analytics
Analytical cookies are used to understand how visitors interact with the website. These cookies help provide information on metrics the number of visitors, bounce rate, traffic source, etc.
Advertisement
Advertisement cookies are used to provide visitors with relevant ads and marketing campaigns. These cookies track visitors across websites and collect information to provide customized ads.
Others
Other uncategorized cookies are those that are being analyzed and have not been classified into a category as yet.
SAVE & ACCEPT
Home » Adorable Police Puppy Reports For First Day On The Job