Home » Husky Found With Frostbite Is Looking For A New Home

Husky Found With Frostbite Is Looking For A New Home 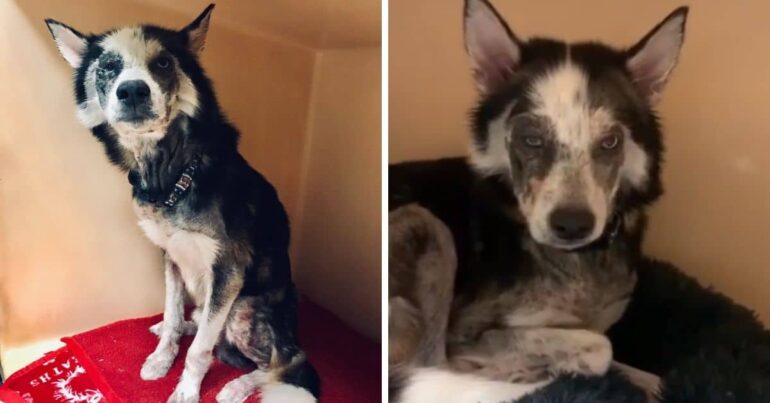 Niagara SPCA in upper New York recently welcomed a new member into their family of rescue dogs. A good Samaritan found Yukon huddled and freezing in the Love Canal area of Niagara Falls. Thought to be a Husky, the obviously neglected dog had patches of missing fur and frostbite on his paws. No one knows how long he was on his own in those freezing conditions, but he’s finally warm and looking for a forever family.

In From the Cold

Yukon came to the shelter on February 6th, and his vets say that wasn’t a day too soon. Huskies are known for loving cold weather, but the frigid winter environment was too much even for this cold-weather dog. Executive director of the Niagara SPCA, Tim Brennan, told WKBW News,

“I don’t think he would have lasted much longer out there in the weather.”

The frostbitten pup needed immediate veterinary attention. He was hungry and thirsty, and his obvious skin condition made him uncomfortable. His paws were extremely painful, and vets needed to warm him up gradually to prevent further damage.
Now that he’s warm and safe, Yukon’s rescuers guess he’s about a year old. He must have been in the cold for an extended time, and there have been no reports of a microchip. Yukon will be up for adoption as soon as he heals, and Niagara SPCA will do everything they can to find him the perfect new home. They said on Facebook,

“Yukon is doing well, he is eating, he has full access to one of our medical rooms, he is nice and warm, all snuggled up in his blankets and most of all, he is getting lots of love from the staff!”

Preparing For a New Home

Shelter staff also reports that Yukon is healthier and happier than the day he was found. Within a few days of being at the shelter, he started interacting with people and showing his true personality. Brennan said,

“We’re starting to see the real Yukon I guess you could say. Despite the hardships he faced, once he got here he didn’t lose any of that sweetness or any of that personality.”

Are Dog DNA Tests Worth It? Here’s What Happened When I Tried It Out

It’s still unclear how long Yukon’s recovery will take. His friends at the shelter want to make sure he’s perfectly healthy before sending him into his new life. He’s shown incredible strength, and it’s clear he isn’t willing to let his past get in the way of his bright future.
If you’re interested in adopting or supporting Yukon, visit the Niagara SPCA website.

Do you support rescue dogs? Click here to learn about Copper, a puppy found with two broken legs.

This website uses cookies to improve your experience while you navigate through the website. Out of these, the cookies that are categorized as necessary are stored on your browser as they are essential for the working of basic functionalities of the website. We also use third-party cookies that help us analyze and understand how you use this website. These cookies will be stored in your browser only with your consent. You also have the option to opt-out of these cookies. But opting out of some of these cookies may affect your browsing experience.
Necessary Always Enabled
Necessary cookies are absolutely essential for the website to function properly. These cookies ensure basic functionalities and security features of the website, anonymously.
Functional
Functional cookies help to perform certain functionalities like sharing the content of the website on social media platforms, collect feedbacks, and other third-party features.
Performance
Performance cookies are used to understand and analyze the key performance indexes of the website which helps in delivering a better user experience for the visitors.
Analytics
Analytical cookies are used to understand how visitors interact with the website. These cookies help provide information on metrics the number of visitors, bounce rate, traffic source, etc.
Advertisement
Advertisement cookies are used to provide visitors with relevant ads and marketing campaigns. These cookies track visitors across websites and collect information to provide customized ads.
Others
Other uncategorized cookies are those that are being analyzed and have not been classified into a category as yet.
SAVE & ACCEPT
Home » Husky Found With Frostbite Is Looking For A New Home