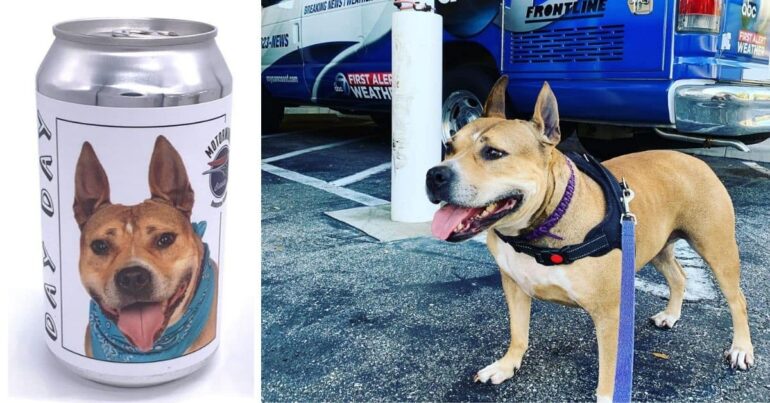 With so many rescue dogs in shelters and not enough space to go around, shelters across the country are thinking up creative ways to attract new adopters.
Manatee County Animal Services in Florida got the bright idea to combine their shelter pets with one of America’s favorite past times–beer. They partnered with MotorWorks Brewing to put pictures of adoptable dogs on beer cans. Their goal was to draw attention to their cute pups, and their plan worked in a way they were never expecting.

Thanks to a picture on a beer can, a dog named Hazel is going home three years after she went missing.

Facebook
This happy reunion started when Minnesota resident Monica Mathis was scrolling through Facebook. By that time, the animal shelter’s beer can campaign was making its rounds through social media. Monica spotted a picture of the cans, and she stopped scrolling to take a closer look.
One of the first beer cans the shelter printed was of a dog named Day Day. The bull terrier mix had an unknown history, and the shelter hoped her picture on a beer can would help her find the perfect family. What they weren’t expecting, however, was for her original family to find her.

Monica saw Day Day’s picture on the can and instantly thought the dog looked familiar.

“I saw one of the dogs on there and I was like ‘oh my gosh, that looks like my dog.'”

Convinced that Day Day was actually her long-lost dog named Hazel, Monica contacted the shelter. Shelter staff told Monica she needed proof that Day Day/Hazel was really her dog. Thankfully, Monica had all the proof she needed. She presented photos and vet records, and microchip information confirmed her story.

Facebook
When Hazel was first brought to the shelter in Florida, officials scanned her for a microchip. She did have a chip, but it had outdated information. It listed Monica’s first name and an old address. After failed attempts to contact her, the shelter put Hazel up for adoption.

But thanks to her picture on a beer can, Hazel is finally going home.

Why You Should Consider Adopting a Schnoodle

“Once I got the confirmation, I just couldn’t believe that this was actually my dog.”

ABC Action News reports that Hazel went missing from her Iowa home in 2017. Monica searched her neighborhood and visited local shelters, but she never found her dog.
Eventually, Monica moved to Minnesota and gave up hope of ever seeing Hazel again. She still has no idea how Hazel made it from Iowa to Florida in the three years she was missing.
What happened in the past, however, isn’t as important as what’s going to happen next.
Manatee County Animal Services is paying a pet transport company to get Hazel to Minnesota. As soon as she has her health certificate, she will get on a plane to be reunited with her family. She should be home just in time to celebrate her seventh birthday.

Watch news coverage on the story below.

Hazel is going home, but there are still dogs waiting for their own happy endings at Manatee County Animal Services. Visit their website to find your next best friend.
Love rescue dogs? Check out this story of a boy who spends his weekends reading to shelter dogs to help them get adopted.

This website uses cookies to improve your experience while you navigate through the website. Out of these, the cookies that are categorized as necessary are stored on your browser as they are essential for the working of basic functionalities of the website. We also use third-party cookies that help us analyze and understand how you use this website. These cookies will be stored in your browser only with your consent. You also have the option to opt-out of these cookies. But opting out of some of these cookies may affect your browsing experience.
Necessary Always Enabled
Necessary cookies are absolutely essential for the website to function properly. These cookies ensure basic functionalities and security features of the website, anonymously.
Functional
Functional cookies help to perform certain functionalities like sharing the content of the website on social media platforms, collect feedbacks, and other third-party features.
Performance
Performance cookies are used to understand and analyze the key performance indexes of the website which helps in delivering a better user experience for the visitors.
Analytics
Analytical cookies are used to understand how visitors interact with the website. These cookies help provide information on metrics the number of visitors, bounce rate, traffic source, etc.
Advertisement
Advertisement cookies are used to provide visitors with relevant ads and marketing campaigns. These cookies track visitors across websites and collect information to provide customized ads.
Others
Other uncategorized cookies are those that are being analyzed and have not been classified into a category as yet.
SAVE & ACCEPT
Home » Dog Missing For Three Years Is Going Home Thanks To Her Picture On A Beer Can