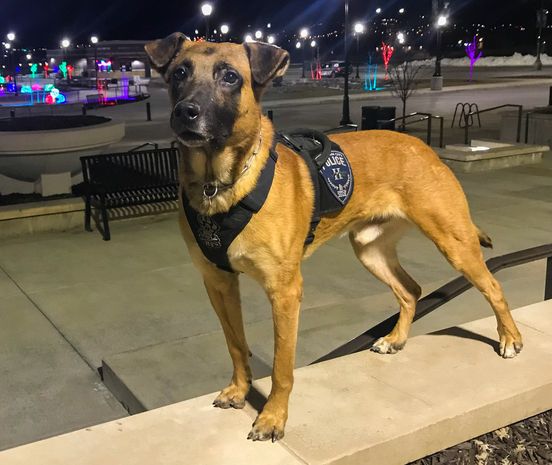 After loyally serving the Herriman City Police Department for five years, a police dog named Hondo will be laid to rest with all the honor he deserves.
K-9 Hondo was fatally shot February 13 while assisting U.S. Marshals in apprehending a dangerous fugitive. He was a respected and beloved member of his community, and people from across the country have come together to honor his memory.

Facebook
After training in Europe, K-9 Hondo served the Herriman City Police Department as a front-line service dog since 2015.  During that time, he assisted in over 100 felony arrests and was one of the best working K-9s in Utah.

He was shot while protecting his partner and fellow officers from an armed fugitive.

‘PSD Hondo was a true warrior when his actions ensured that his loving friend and partner would be able to return home to his wife, children, and HPD family. We mourn the loss of a member of our family, but remember the sacrifice.”

Hondo’s passing is a devastating loss for his community. His partner, fellow officers, and citizens of Herriman City have expressed their grief and appreciation for the hero dog’s actions. Trees in Herriman City are adorned with blue ribbons in his honor, and the police department is planning a memorial service worthy of his sacrifice.

Facebook
To do that, they started by contacting Rawtin Garage. The garage had previously worked with the department to create custom artwork for their motorcycles. They formed a relationship with the city’s police officers and didn’t hesitate to help with this unusual ask.
Normally working on cars and motorcycles, Hondo’s casket was a first for the artists at Rawtin Garage. They typically have a two-month waiting period, but the team worked overtime and overnight to get the job done.

The garage posted photos of the completed casket on their Facebook page.

Facebook
The custom artwork includes a portrait of Hondo sketched by artist Keith Eccles. Eccles worked through the night to ensure the artwork was exactly right. He copied Hondo’s likeness by looking at a photograph and told KSL News,

“In a weird way, it was kind of a spiritual experience. You felt like, by the time you’re done, you really got to know Hondo.”

With Hondo’s custom-painted casket completed, the police dog will be laid to rest during a memorial service on February 29. Members of the community are invited to attend. The service will be followed by a police procession through Herriman City.

This website uses cookies to improve your experience while you navigate through the website. Out of these, the cookies that are categorized as necessary are stored on your browser as they are essential for the working of basic functionalities of the website. We also use third-party cookies that help us analyze and understand how you use this website. These cookies will be stored in your browser only with your consent. You also have the option to opt-out of these cookies. But opting out of some of these cookies may affect your browsing experience.
Necessary Always Enabled
Necessary cookies are absolutely essential for the website to function properly. These cookies ensure basic functionalities and security features of the website, anonymously.
Functional
Functional cookies help to perform certain functionalities like sharing the content of the website on social media platforms, collect feedbacks, and other third-party features.
Performance
Performance cookies are used to understand and analyze the key performance indexes of the website which helps in delivering a better user experience for the visitors.
Analytics
Analytical cookies are used to understand how visitors interact with the website. These cookies help provide information on metrics the number of visitors, bounce rate, traffic source, etc.
Advertisement
Advertisement cookies are used to provide visitors with relevant ads and marketing campaigns. These cookies track visitors across websites and collect information to provide customized ads.
Others
Other uncategorized cookies are those that are being analyzed and have not been classified into a category as yet.
SAVE & ACCEPT
Home » Police Dog Honored With Custom Casket After Being Fatally Shot In Line Of Duty